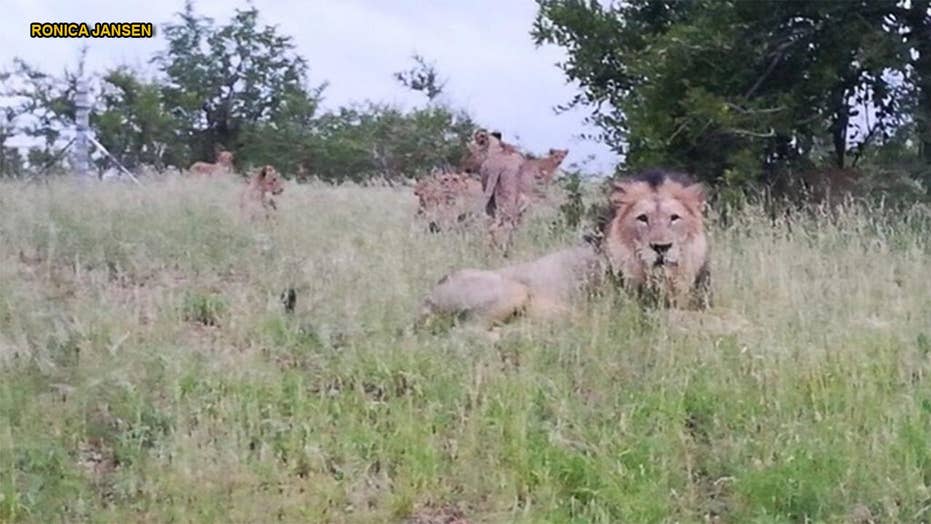 Since elephants trampled down surrounding fences, South African officials have opted to allow wild animals including rhinos, buffalo and a pride of nearly 50 lions to roam free. While many local residents worry for their safety, others understand the decision permitting the creatures to exist in their natural habitat.

JOHANNESBURG - Up to 50 lions are roaming loose within walking distance of a South African town – and authorities have decided to keep it this way.

While tourists can spend as much as $2,000 a day to go on safari from luxury lodges inside the electrified fences of Kruger National Park, just outside those same barriers, there's a far cheaper, albeit potentially much more dangerous alternative.

Ronica Jansen says people check into her Arimagham guesthouse in the town of Phalaborwa, less than a mile from the outskirts of Kruger, where rates start at $36 a night per person, especially to see the area’s wildlife. She says she’s seen other wild animals too, adding: “You find hippos and buffalo walking in the street here in town. “

Another resident claims he woke up one morning to find a rhino on his front lawn.

Ronica Jansen has been seeing lions around Phalaborwa out in the open, since 2010, photographing a group of them in February. (Ronica Jansen)

But a reminder that these animals are dangerous came just this week when an elephant trampled a security guard to death on the outskirts of the town, the same area where the lions have been seen.

Local journalists stumbled across the presence of an entire pride of lions this past week and alerted authorities. The lions and other beasts apparently wander in and out of the park thanks to elephants who have trampled down fences.

But Jansen has been seeing lions around Phalaborwa out in the open, since 2010, photographing a group of them in February. Although around 10 are in her photo, she claims she could see the eyes of others in the bushes close to the town and believes there are between 30 to 50 in the pride.

Phalaborwa has become perhaps the only place in the world where African lions are not kept behind fences, following a decision by a top local official to let them roam free.

Thabo Mokone, member of the executive council (MEC) for economic development, environment and tourism for the local area called Mpumalanga, which borders Kruger National Park, said moving the lions to another territory would be "totally unfair".

Jansen adds that when she took photos of the lions just outside the town “ I was very lucky. I can’t explain the feeling. They were crossing the road “ (Ronica Jansen)

"The lions are free to roam around the area, as the community has always been aware of them. We are not going to dart them or move them, we know them," he said.

His view is not shared by John Khuswa, who came across the lions while driving just outside the town earlier this week.

“I was surprised.  It was a scary situation”, he told Fox News. “I think they should be put behind fences”.

Bertus de Bruyn, Acting Group Editor of the local Letaba Herald newspaper, says the decision is "craziness" and believes people living in local villages are worried. While it's one thing for giraffes to be seen ambling across the local golf course, for others who don't have the safety of cars to travel in, it's a serious concern.

"The community is very scared," he said.

Local game rangers agree that lions are opportunists. Even if they are snoozing with full bellies, if a human passes they will strike, and leave the person to be eaten later.

Others are not worried.

Lydia Radebe, the spokesperson for the town’s Phalaborwa Mining Company mine, where lions were filmed by Khuswa, said “these lions have been here a lot of times.”

In their induction training, new workers are told about them, she adds. Radebe blames the media for “creating uncertainty. We have to deal with (such) wild animals on a daily basis.”

And Ronica Jansen adds that when she took photos of the lions just outside the town “ I was very lucky. I can’t explain the feeling. They were crossing the road “

Jansen agrees that “it is a lion’s nature to attack.”

“You don’t really go jogging or riding a bicycle here," she added.

But she concludes: “I don’t see why they have to be locked away. It’s their valley also.”