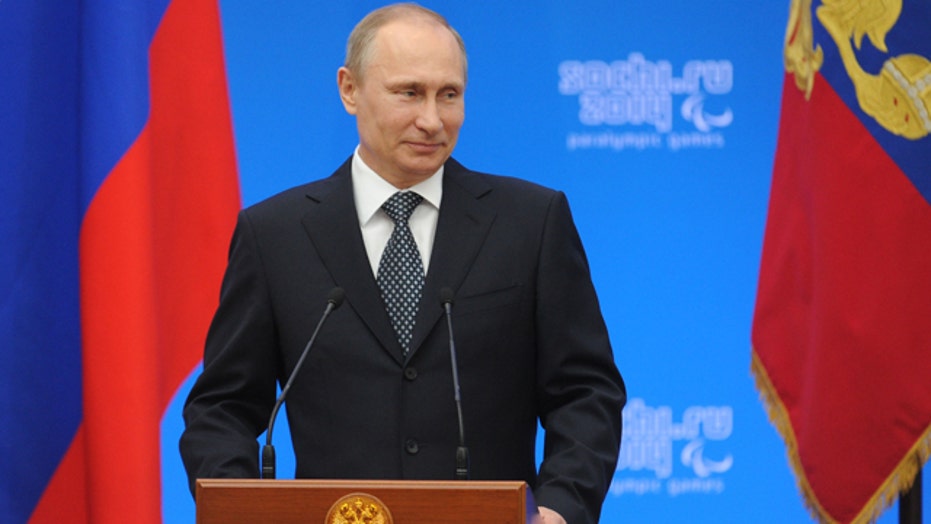 Former US Ambassador to Ukraine William B. Taylor on the threat posed by Moscow

An attempt by Russia to continue its military push in Ukraine and possibly neighboring countries shows how Putin is “overplaying his hand,” according to a foreign policy expert.

Fox News National Security Analyst KT McFarland spoke to Ambassador William Taylor about Russia’s next move. Taylor was the U.S. Ambassador to Ukraine during the Bush Administration. He currently serves as a vice president at the United States Institute of Peace.

Taylor insists Putin has two options after Sunday’s vote in Crimea: “He can absorb Crimea into Russia, accept the vote … or does he let it simmer for a while to see what the reaction is,” Taylor said.

Ukrainians are worried Russia’s move into Crimea is only the first step in Moscow absorbing other eastern, Russian-speaking regions of the country.

Taylor argues any further movement would be a “disaster” for Putin.

“What he has done is move thugs and rented people into eastern cities of Ukraine to cause trouble and to provoke violence,” Taylor said. “He could use that provocation, that manufactured crisis, to justify in his mind the move of Russian troops into Ukraine.”

Some of Russia’s other neighboring countries are on alert. Focus has been put on the Baltic countries of Estonia, Latvia, and Lithuania. Those nations are members of the European Union and NATO.

“NATO’s treaty says that an attack on one is an attack on all,” Taylor said. “If Putin were to attack the Baltics, move troops in … that would be the legal equivalent of an attack on the United States and we would respond.”

Taylor insists any attempt by Russia to try and pressure former satellite states of the Soviet Union “won’t work and will backfire.”