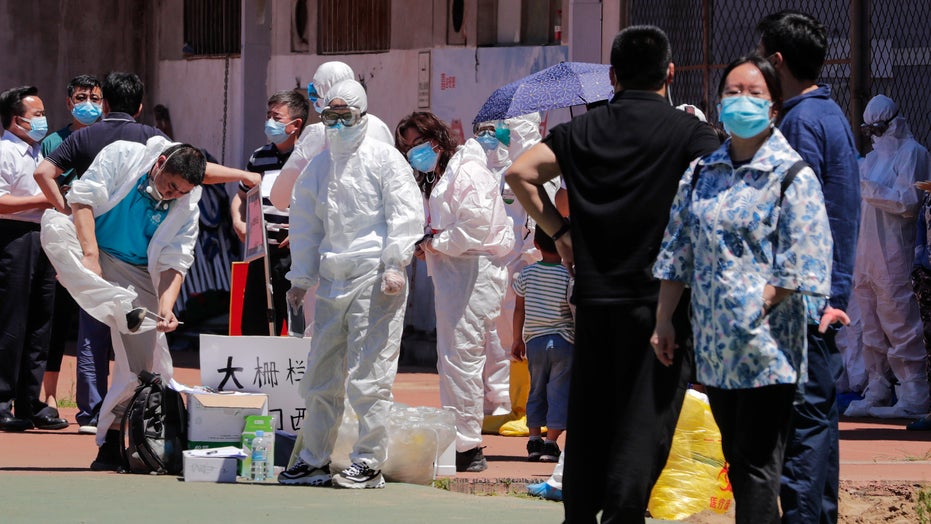 Officials in China closed more neighborhoods and fired officials on Monday amid fears of a new coronavirus outbreak linked to a market in Beijing, according to multiple reports.

At least 10 residential communities near the Yuquandong market in Beijing's Haidian District were placed under lockdown after "multiple cases" were found over the weekend.

Residents were ordered to go under home quarantine and take nucleic acid tests for the virus. All of the infections reportedly had ties to the Xinfadi market in Beijing’s southern Fengtai district -- identified as the center of a new cluster of cases.

Workers put on protective suits as they wait for people living surrounding the Xinfadi wholesale market arrive to get a nucleic acid test at a stadium in Beijing, Sunday, June 14, 2020. China is reporting its highest daily total of coronavirus cases in two months after the capital's biggest wholesale food market was shut down following a resurgence in local infections. (AP Photo/Andy Wong)

“The risk of the epidemic spreading is very high, so we should take resolute and decisive measures,” Xu Hejian, a spokesman for the Beijing city government, said at a press briefing on Monday, according to the Guardian.

Authorities announced 49 new cases on Monday, 36 of which were linked to the Xinfadi market, which was closed on Saturday and prompted the lockdown of 11 other residential communities in the area.

The wholesale food market is considered the biggest in Asia and accounts for about 80 percent of Beijing’s farm produce supply, according to Reuters. Xinfadi is roughly 20 times larger than the seafood market in Wuhan -- where the coronavirus was said to have originated.

At least two-party officials in Fengtai district were fired on Monday, as well as the manager of the market “failing to implement” proper virus prevention and control work, according to state media.

The city had also ordered testing for all of its workers and required anyone who traveled there to self-isolate for two weeks.

The National Health Commission has now reported 177 people in treatment for COVID-19. Meanwhile, 115 people were in isolation after showing signs of the illness or testing positive without giving off symptoms.

Beijing had previously gone 55 days in which the only new infections were citizens returning from other countries. They've now reported a total of 79 cases in the past four days, according to the news organization.

On Sunday, authorities said that 59 people had tested positive out of the roughly 70,000 that were given tests, the Guardian reported. The same day, Hejian said Beijing had entered “an extraordinary period."

The new cases reported in the past few days mark China’s highest daily total of coronavirus cases in two months, prompting Beijing to suspend the restart of some classes and reverse the relaxation of some social isolation measures.

They are considered alarming due to the strict travel restrictions and quarantine measures that had been implemented in the city.

Beijing health officials said gene sequencing showed the virus strain causing the new outbreak was related to that in Europe, though it wasn’t clear if it was being spread by the movement of people or transportation of food.

China has reported at least 84,335 confirmed coronavirus infections and more than 4,638 of the virus, although some have argued those numbers have been under-reported, which the country denied.