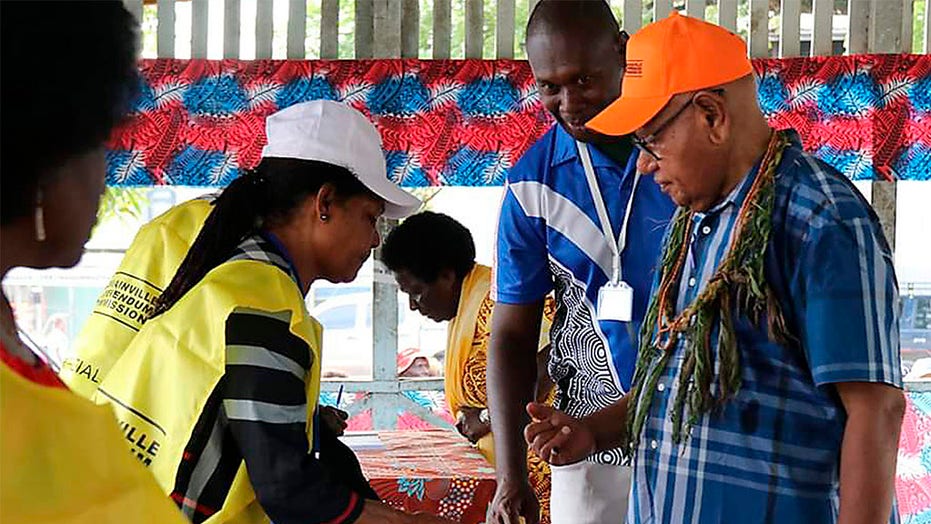 Residents of a Pacific archipelago started voting Saturday in a historic referendum that could lead to the establishment of the world’s newest nation.

The two-week vote will decide if Bougainville favors independence from Papua New Guinea or more autonomy.

The referendum is taking place 19 years after a peace agreement ended a brutal, decade-long civil war in Bougainville in which 15,000 people died.

John Momis, right, president of the Autonomous Region of Bougainville, prepares to vote in Buka, Papua New Guinea, Saturday in a historic referendum to decide if they want to become the world's newest nation by gaining independence from Papua New Guinea. (Post Courier via AP)

“They’ve been waiting 19 years for this historic moment,” said Gianluca Rampolla, the United Nations resident coordinator in Papua New Guinea. “I think they will be left with joy.”

The 250,000 eligible voters will have two weeks to vote, a period of time that is due to the region’s rugged terrain.

PACIFIC ARCHIPELAGO TO VOTE ON INDEPENDENCE FROM FRANCE

An overwhelming majority is expected to vote for independence in the referendum,which is nonbinding. Papua New Guinea’s Parliament will have the final say.

John Momis, president of the Autonomous Region of Bougainville, told reporters Friday the region stood on the verge of a new socio- economic and political order.

“We are trailblazers forging a new path into the unknown with the sheer determination to face any challenge that comes our way,” he said. “We will face this together as one people and one voice to decide our ultimate political future.”