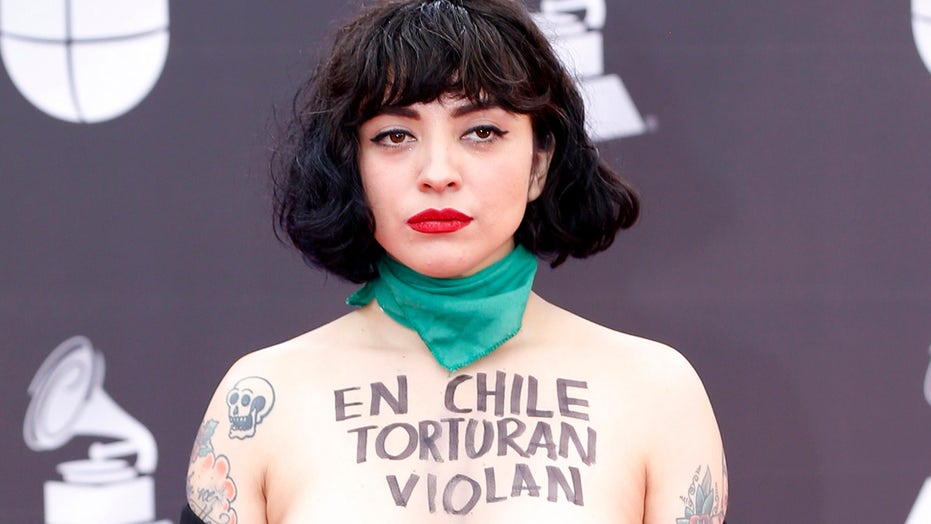 Chilean singer Mon Laferte went topless to protest police brutality in her home country when she walked the red carpet at the Latin Grammy Awards on Thursday -- hours before the Chilean government finally bowed to demands for a constitutional referendum on Friday after nearly a month of protests.

Laferte, 36, who supported anti-government protests in the South American country, opened her black jacket during the awards to reveal the phrase "En Chile torturan violan y matan" written on her bare chest. The phrase translates to "In Chile, they torture, rape and kill."

She was one of many artists to speak out about the political situation and police brutality in Chile during the award show.

VENEZUELA'S EX-SPY CHIEF DISAPPEARS ON EVE OF EXTRADITION TO US

Chile has been impacted by unrest over the past month, with the country reeling from widespread riots, arson, and looting. The referendum is seen as a landmark victory for Chilean protesters.

Chile is dealing with more than 800 allegations of rape, torture and beatings by police and government security, according to The New York Times, which added that President Sebastian Pinera has vowed to apply the full force of the law to police and soldiers who engaged in abuse.

"This president is committed to total respect for human rights at all times and in all circumstances," Pinera said. "We will investigate any excess, failure of protocol in the use of force or excessive use of force."

The singer, along with protesters throughout Chile, has demanded social reforms and a change to the constitution that dates back to the pre-democracy area of military leader Augusto Pinochet.

The "Agreement for Peace and a New Constitution" was signed at midnight and a vote will take place in April 2020, according to the BBC.

The referendum will ask voters if they want the constitution to be replaced. Those who think it should be, have the option to chose between three different ways to create a new constitution, which includes elected representatives, political appointees or a mix of both, the outlet reported.

Anti-government demonstrators clash with police during a protest in Santiago, Chile, Thursday, Nov. 14, 2019. Students in Chile began protesting nearly a month ago over a subway fare hike. The demonstrations have morphed into a massive protest movement demanding improvements in basic services and benefits, including pensions, health, and education. (AP Photo/Esteban Felix)

At least 20 people have died, over 7,000 have been detained and 2,500 have been injured during the political unrest that ignited 29 days ago over a four-cent increase in subway fares and transformed into a political movement targeting the country's growing inequality, according to the BBC.

Chile is one of the wealthiest countries in Latin American while having the worst levels of income inequality among the 36 member nations of the Organization for Economic Co-operation and Development, according to the outlet.

Anti-government demonstrators clash with Chilean police during a protest in Santiago, Chile, Thursday, Nov. 14, 2019. Students in Chile began protesting nearly a month ago over a subway fare hike. The demonstrations have morphed into a massive protest movement demanding improvements in basic services and benefits, including pensions, health, and education. (AP Photo/Esteban Felix)

“We are responsible for many of the injustices, inequities, and abuses that Chileans have pointed out to us,” Senate President Jaime Quintana said in a news conference, according to the Washington Post. “This is a peaceful and democratic exit to the country’s crisis.”

Socialists, conservatives, and moderates agreed on the new plan, though the Communist Party balked, demanding an all-citizen drafting committee.

Following her topless statement, Laferte won best alternative album for "Norma" at the Latin Grammys and dedicated the win to her home country of Chile.

"I want to thank my colleagues … and especially to the public, the people, the fans that are there; without people, nothing could happen," she said during her acceptance speech, according to USA Today.