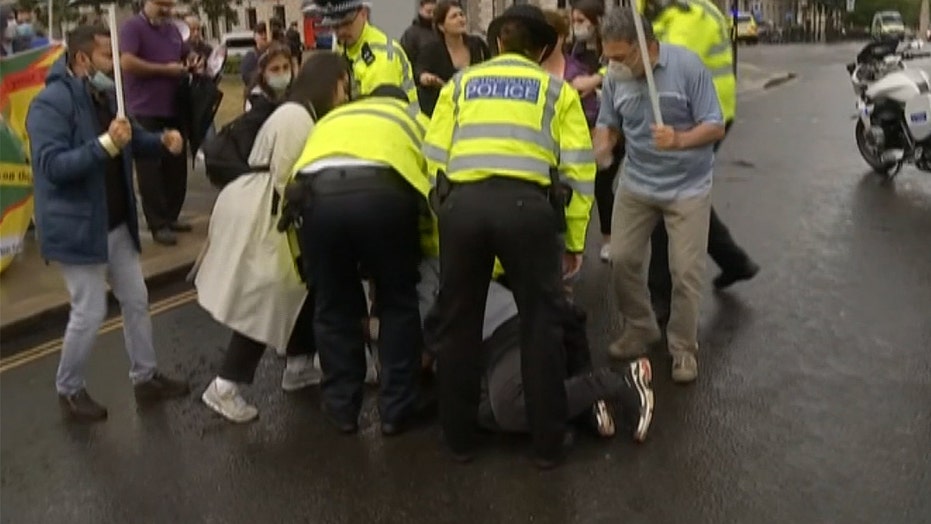 UK Prime Minister Johnson involved in car accident with pro-Kurdish demonstrator outside the Houses of Parliament.

British Prime Minister Boris Johnson was involved in a minor fender-bender Wednesday when a protester ran toward his motorcade as it left Parliament.

The prime minister’s office confirmed Johnson was in the car and that there were no reports of injuries.

Video footage shows Johnson’s silver Jaguar pull onto Downing Street behind a police motorcycle leading the convoy when a man runs into the road.

Both the lead motorcycle and Johnson’s car hit the brakes suddenly, causing a Range Rover SUV carrying his security detail to ram into the back of the Jaguar. A dent could be seen on the trunk of the vehicle.

Damage to Britain's Prime Minister Boris Johnson's car after a man ran in front of it as it left the Houses of Parliament in London on Wednesday. The prime minister’s office confirmed Johnson was in the car and that there were no reports of any injuries. (Victoria Jones/PA via AP)

Images from the scene show the protester fall to the pavement before he is taken away by several police.

The man is believed to have been part of a pro-Kurdish group protesting Turkey's treatment of Kurdish rebels, Sky News reported.

Police detained a man after he appeared to run in front of Johnson's car.  (Victoria Jones/PA via AP)

The man was arrested on charges of disorderly behavior under Section 5 of the Public Order Act and for obstructing the highway, the Metropolitan Police said in a statement.

The man is believed to have been part of a pro-Kurdish protest group. (Victoria Jones/PA via AP)

Johnson was leaving Parliament after participating in the weekly questions session. It's been about six weeks since Johnson has been back at work following his bout with COVID-19.

The Parliament gate near where the incident occurred was also the scene of a terror attack in 2017 that killed 5 people, including a police officer, and injured 50 others.