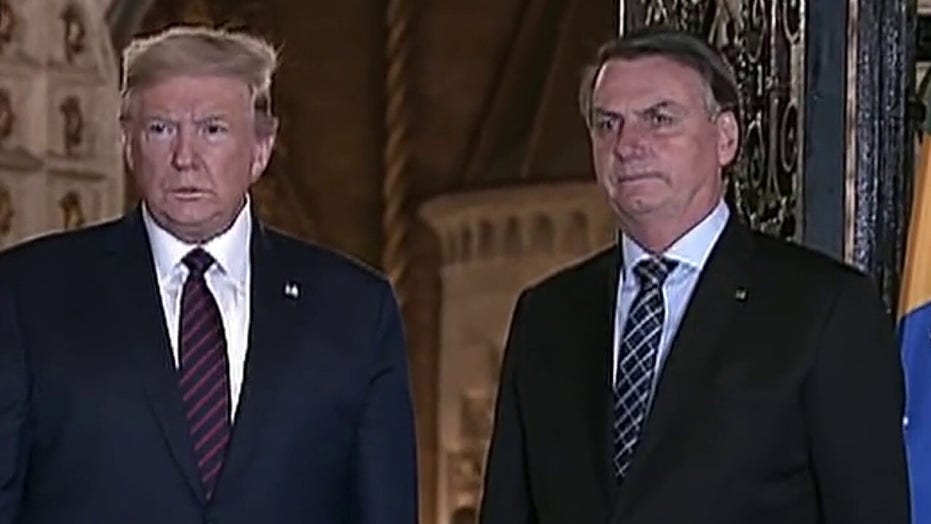 Local television footage showed law enforcement escorting Fabricio Queiroz, a long-time friend of the president and a former police officer, out of a property in Atibaia, a town in Sao Paulo.

Police Chief Osvaldo Nico Goncalves told GloboNews that Queiroz had been asleep when the cops showed up to arrest him.

JAIR BOLSONARO: WHAT TO KNOW ABOUT BRAZIL'S CONTROVERSIAL PRESIDENT

"He handed himself over without any problems," Goncalves said. "The only thing he said was that his health was in a bad way."

Queiroz was arrested as part of a joint operation between public prosecutors in Rio de Janeiro and Sao Paolo.

The investigation began when the government’s watchdog for financial transactions detected suspicious movements in the bank account of Queiroz, according to authorities. It is suspected the money may form part of a corruption scheme involving the appropriation of salaries from phantom employees of Flávio Bolsonaro’s office while he was a lawmaker in Rio state’s legislature.

The financial regulator has said many of the payments to Queiroz came on paydays for people on Flávio Bolsonaro’s payroll. In December, Rio prosecutors carried out searches at 24 properties, including a chocolate shop owned by Bolsonaro.

He denied any wrongdoing on Twitter and said the operation is part of an attempt to damage his father’s administration.

President Bolsonaro in October said Queiroz, a former military police officer, had been his friend since the 1980s but hadn’t spoken with him since the allegations surfaced.

“I face today’s events with calm. The truth will prevail! Another piece was moved on the board to attack Bolsonaro,” the younger Bolsonaro said. “The game is rough!”

Queiroz stopped working with Flávio Bolsonaro in October 2018. Paulo Marinho, a businessman and former ally of the Brazilian president, told newspaper Folha de S.Paulo last month that Flávio Bolsonaro decided to fire Queiroz upon receiving leaked information that his aide would be targeted by an investigation.

In recent months, “Where is Queiroz?” became a rallying cry for Bolsonaro opponents who were dismayed that the former driver continued to elude authorities.