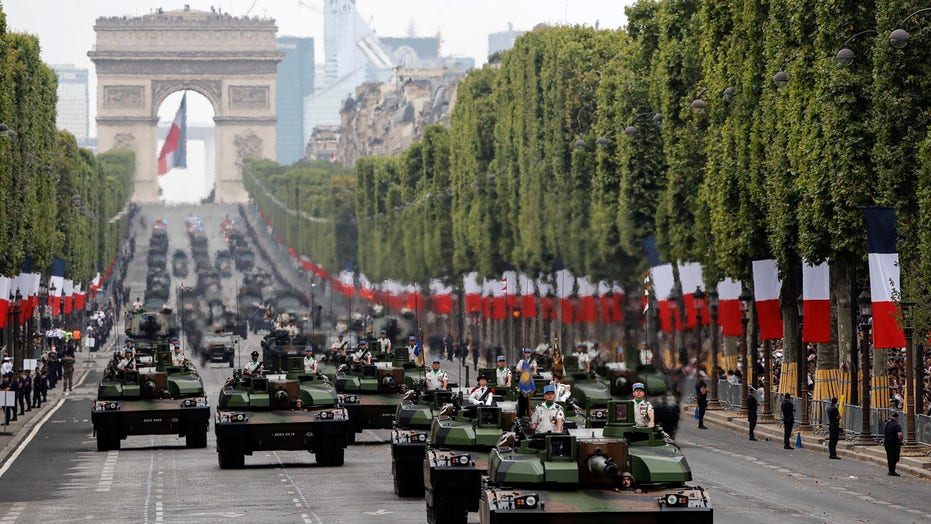 The annual Bastille Day celebration in Paris this year was not just about showcasing France, but also military cooperation among European continues.

In a message to the French people before the parade, President Emmanuel Macron highlighted the importance of France's commitment to boost European security.

“Never since the end of the Second World War has Europe been so necessary. The construction of a Europe of defense, in connection with the Atlantic Alliance...is a priority for France. It is the theme of this parade,” he said.

VATICAN FINDS BONES, DEEPENING MYSTERY IN SEARCH FOR GIRL WHO DISAPPEARED 36 YEARS AGO

“Acting together and strengthening our ability to act collectively is one of the challenges that the European Intervention Initiative, along with other key European projects, wants to address," Macron added.

Some 4,300 soldiers, around 200 vehicles and over 100 aircraft, some from other European countries, were taking part in the parade that was opened by Spanish troops, according to Reuters.

French Alpha jets of the Patrouille de France spray lines of smoke in the colors of the French flag over the Champs-Elysees during Bastille Day parade Sunday, July 14, 2019, near the Champs Elysees avenue in Paris. (AP Photo/Rafael Yaghobzadeh)

The biggest crowd-pleaser on the display appeared to be a man rocketing through the air on a flyboard device — the invention of French former jet-skiing champion Franky Zapata.

Tensions in the street remain high in Paris following months of demonstrations by the anti-Macron yellow vest protesters who want more help for French workers.

On Sunday, television images showed police grabbing one of the movement's leaders, Eric Drouet, as he stood on the sidelines of the parade and escorting him away.

At France's 2017 Bastille Day events, U.S. President Donald Trump, as the guest of honor, was so impressed he ordered a military parade in Washington for America's July 4 celebrations. Macron will later host a lunch at the Elysee Palace with other European leaders, including Merkel.

Bastille Day commemorates the storming of the Bastille prison in 1789, one of the key events of the French Revolution. The day has become a national holiday in France.

The European Intervention Initiative is a 10-country coalition of European militaries ready to react to crises. The French-led initiative, which includes Germany, Belgium, Britain, Denmark, Estonia, the Netherlands, Spain, and Portugal, was launched last year, according to Reuters.