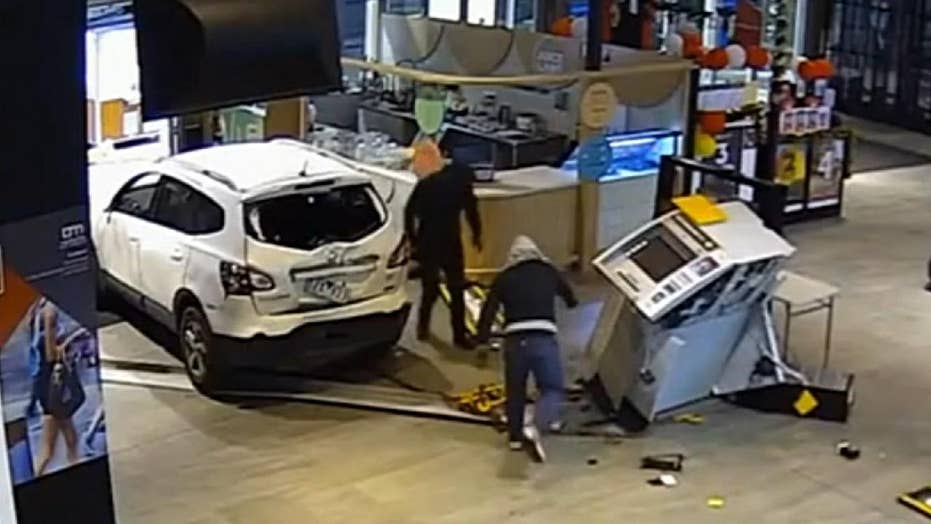 If at first you don’t succeed…

A pair of would-be thieves in Australia was caught on camera trying to steal an ATM from inside a shopping center – but despite their repeated efforts, the machine refused to break.

AUSTRALIAN TOURIST, 35, TIED UP AND BEATEN BY INDIAN MOB HAD ALLEGEDLY 'MISBEHAVED' AROUND VILLAGE WOMEN

The two men wearing hoodies smashed through a Melbourne storefront in a stolen Nissan Dualis at around 3:45 a.m. on Tuesday, Victoria Police said in a statement.

Surveillance footage captured the bumbling thieves as they failed to break open the ATM by reversing the white SUV into it. The suspects’ first attempt appeared to only tap the machine with the vehicle’s bumper. Future attempts also proved unsuccessful and the machine remained unbroken.

The suspects then hooked a chain around the ATM to try ripping the machine out of the ground. But instead of pulling out the machine, the SUV’s bumper was nearly torn off.

Unable to get any cash from the machine, the men left empty-handed and ditched the stolen SUV nearby, police said.

While nothing was stolen, the botched raid resulted in a costly damage bill estimated to be over $10,000, police said.

Investigators have asked the public for help, requesting any dashcam video from 1 a.m. to 4 a.m. that shows a white Nissan Dualis.