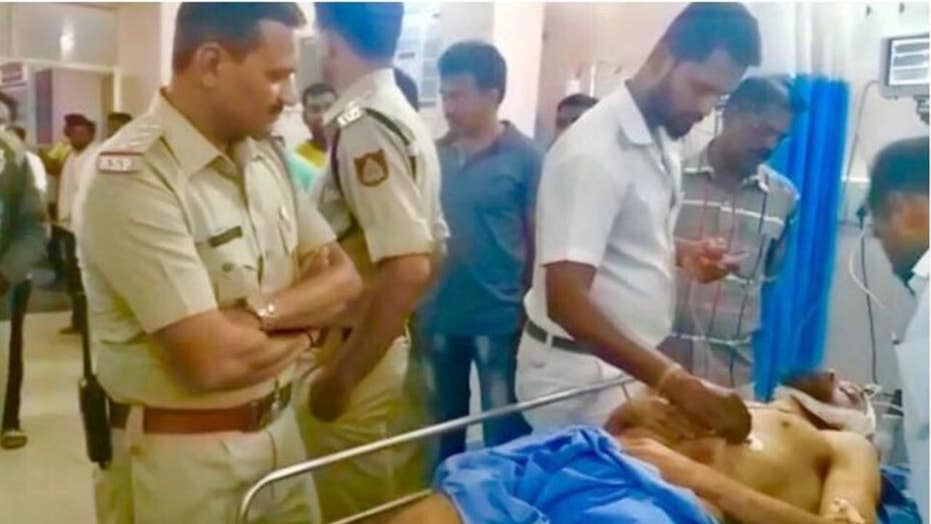 A 35-year-old Melbourne man was photographed in a hospital bed with a rope still tied around his wrist and his body covered in dirt and blood after being beaten by a mob of villagers in southwest India. Police were told the man was intoxicated and was 'misbehaving' with local women.

An Australian tourist in India was bound and beaten by a group of villagers this week after he “misbehaved” with the local women while drunk, officials said.

The 35-year-old Melbourne man was seen in pictures lying in a hospital bed with a rope still tied around his wrists. His body was covered in dirt, blood and bruises.

“The residents in the village alleged that he misbehaved with women, and in response, attacked him," Bagalkot police Chief Lokesh Jagalasar told local media outlet The News Minute.

The villagers tied the tourist to a post and attacked him, police said. (MM Goudar)

The tourist, identified by local media as William K. James, had suffered “grievous injuries” after villagers in the southwest state of Karnataka tied him to a power pole and assaulted him, local police told the Times of India.

James, who had been sightseeing in India since Sept. 17, was traveling alone by bus from the town of Badami to the city of Bagalkot, which is 21 miles north, Jagalasar said.

James was pictured lying in a hospital bed with a rope still tied around his wrists. His body was covered in dirt, blood and bruises. (MM Goudar)

But just 10 miles from Badami, he got off the bus at the village of Konanakoppa for reasons that are still unknown. Jagalasar said James was drunk when he arrived and was accused of misbehaving with a few women.

“When some men tried to stop him, he reportedly made a bid to attack them,” Jagalasar said. “The men tied him up to an electric post and assaulted him.”

Police were called to the scene and rushed James to the hospital, where doctors determined he was still intoxicated, according to local media.

Police were called and rescued the man, who they said had suffered "grievous injuries." (MM Goudar)

Officials said he was now “out of danger” and recovering at the hospital.

Police have begun an investigation into the circumstances of the attack, filing a first incident report (FIR) and questioning several villagers suspected of the assault.

"We are trying to ascertain how many people were involved in the assault and their identities,” Jagalasar said. “We have not found videos of the assault but we will be forming a team to investigate the incident swiftly.”

He told Australia's ABC News the attack could have been a misunderstanding that resulted from the language barrier. He said the Australian embassy was told of the incident.

Badami is popular among tourists for its cave temples and red sandstone cliffs.