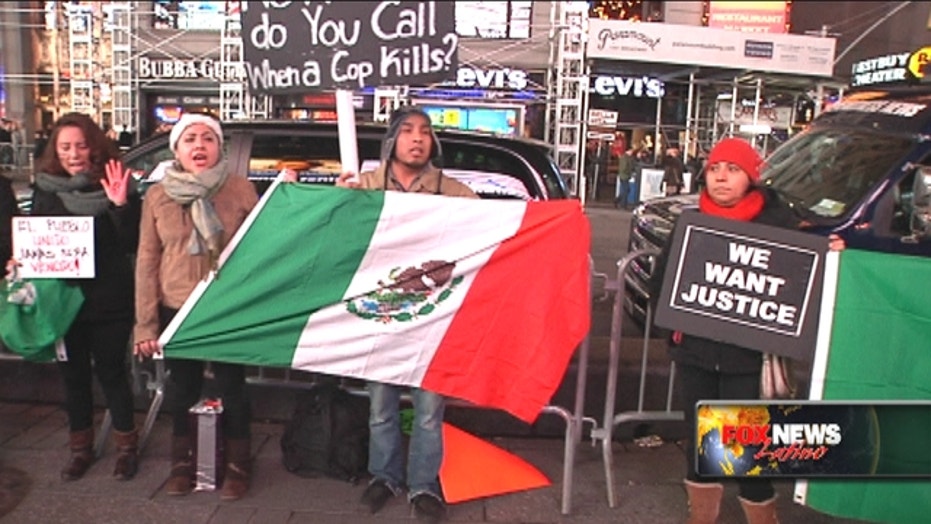 The #USTired2 movement held rallies in over 43 U.S. cities, including New York, over missing 43 Mexican students and US drug war funding in Mexico.

New York – The faces of the 43 missing Mexican students were illuminated under the bright lights of Times Square as a group of about 100 demonstrators gathered at the crossroads of the world on a night full of unrest in New York City.

As thousands of protesters - angry about a grand jury ruling that cleared a white police officer on Wednesday in the videotaped choking death of an unarmed black man - took over Midtown Manhattan, a separate demonstration of activists  - some masked, some with signs saying, “SOS for Mexico,” and one with a manipulated image of a Time magazine cover featuring Mexican President Enrique Peña Nieto as the Grim Reaper – were part of a group of about 47 protests and vigils taking place across the country to demand the end of U.S. anti-drug funding to Mexico.

“In 47 – perhaps 50 cities – people are coming together by the hundreds to say, 'Ya basta!' No more Plan Mexico,” Roberto Lovato, a writer and activist who helped organize the  #USTired2 social media campaign that put together the nationwide demonstrations, told Fox News Latino while in Times Square. “We want our tax dollars to be used for peace, not for an undeclared war on the Mexican people.”

Lovato and other organizers blame much of the pervasive violence in Mexico on the weapons and funding given to that country under the Mérida Initiative, a security strategy between the two countries signed in 2008 that among other things has provided $2.1 billion to Mexico to combat drug trafficking in the country. It is dismissively referred to as Plan Mexico, a reference to Plan Colombia, the U.S. drug war initiative in that South American nation. And while the initiative is loosely modeled after a similar effort in Colombia, many critics claim that it is doing more harm than good – citing widespread corruption throughout Mexico’s civil police forces and a soaring murder rate since its implementation.

While the #USTired2 movement held well-attended protests in Los Angeles, Dallas, Chicago and Washington, D.C. – where dozens of protesters took over Dupont Circle – the demonstration in New York was laced with unhappiness over a grand jury ruling clearing a New York City police officer in the death of Staten Island man Eric Garner.

Along with chants of “Out with Peña Nieto,” the #USTired2 group shouted “Hands up, don’t shoot” while raising their hands in a gesture now made iconic following the protests in Ferguson, Missouri. Many of the demonstrators drew comparisons between the disappearance of the students in Mexico and the perceived heavy-handed policing tactics used against African-Americans in places Ferguson and New York City.

“They've been feeling this repression for so long, and the instant someone wants to stand up and say something about it they get this immediate backlash,” Damian Tejada, an activist and student at Lehman College in the Bronx, told FNL. “This immediate backlash is followed by tear gas and rubber bullets. The same thing happened in Mexico because it's what happens when you speak up, you disappear.”

On Tuesday night, the organizers of #USTired2 put together a conference call between the mothers of the missing students and parents of children in Ferguson.

“The most moving moment was when the indigenous mothers who were looking for their sons who has been disappeared by the Mexican police were speaking to African-American mothers about what is happening in Ferguson,” Lovato said. “They were both saying ‘I know what you feel, I know what this is like.’”

The 43 Mexican students who disappeared in late September, were from the Raúl Isidro Burgos Rural Teachers' College of Ayotzinapa, Guerrero. They disappeared after a clash with police in Iguala, about 100 miles southwest of Mexico City, and while no definite remains have been uncovered, investigators believe they were murdered and burned in a mass grave on the orders of José Luís Abarca, the mayor of Iguala.

The crime has shaken the country and drawn international criticism and protests over the involvement of Mexican officials and police in the disappearance of the students and for the U.S. anti-drug funding in the country.

Some of the protesters in New York on Wednesday night argued that the administration of President Barack Obama should spend less time criticizing countries like Cuba and Venezuela and instead focus its attention on the human rights record of Mexico. Activists sent several thousand letters to the chairman of the U.S. Senate’s foreign relations committee, New Jersey Sen. Bob Menendez, asking him to speak out against the mass graves and killings in Mexico.

“I want our government to stop Plan Mexico,” Lovato said. “Let’s end the dirty drug war that is killing tens of thousands of Mexicans and disappearing others.”