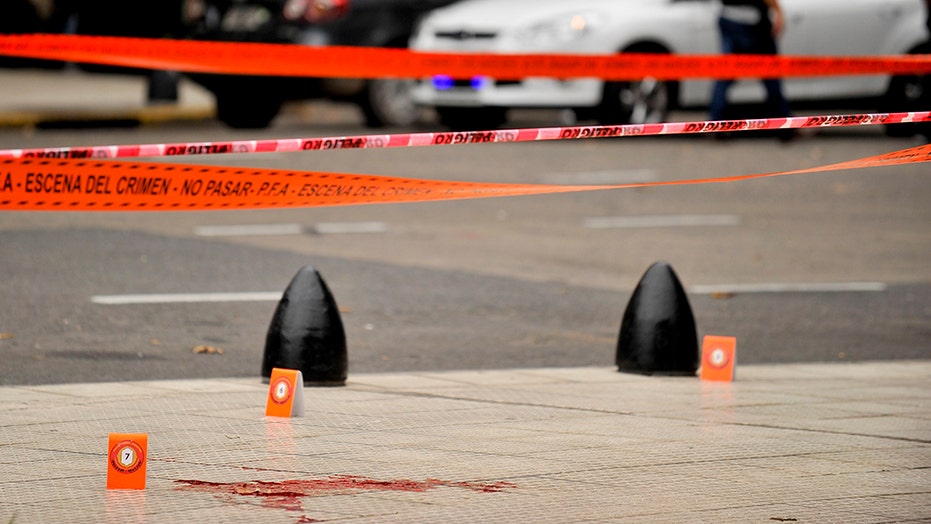 A member of Argentina's Congress was shot, and his friend killed, when two men who apparently were lying in wait in a car attacked them as they went for their daily walk Thursday.

The congressman, Héctor Olivares, was seriously injured and said to be in critical condition. His friend, provincial official Miguel Marcelo Yadón, who was walking with Olivares at about 7 a.m. local time near the congressional building in Buenos Aires, was shot several times and died from his injuries.

It was one of the most brazen political attacks in the South American country since it returned to democracy in 1983.

Olivares, 61, is being treated for gunshot wounds that pierced his abdomen and affected vital organs.

Yadón, 58, was a coordinator who worked in the fiduciary of La Rioja’s federal electric transportation system. Yadón and Olivares, who reportedly were friends since they were teenagers, were shot at least six times.

Argentine President Mauricio Macri said doctors were trying to save Olivares’ life and he expressed condolences to Yadón’s family.

ARGENTINA: BODIES OF 600 DISAPPEARED WAIT TO BE IDENTIFIED

“We’re moved by this attack,” Macri said in a televised address. “We’re praying for Héctor’s life ... We will do everything to find out what happened and find out who is guilty of this.”

We’re praying for Héctor’s life ... We will do everything to find out what happened and find out who is guilty of this.

Local media initially reported that Yadón and Olivares had been shot from a moving vehicle, but a surveillance video of the shooting released by the security ministry showed a parked car waiting for them. As the men walk by, they’re seen being shot at close range. Yadón collapses on the sidewalk, while an injured Olivares tries to get up and holds up his arms in a desperate cry for help.

A burly man in the driver’s seat then steps out of the car and paces. Another man also steps out and walks away calmly. When a police officer arrives on the scene, the car drives away slowly.

Security Minister Patricia Bullrich said the shooting “confirms the presence of mafias in our country.”

Evidence tent markers dot the crime scene where lawmaker Hector Olivares was seriously injured and another man was killed after they were shot at from a parked car near Congress in Buenos Aires, Argentina, Thursday, May 9, 2019.  (AP)

“Yadón was killed from a car that was waiting for him,” Bullrich said in a press conference. “They shoot the main target, which was Yadón; they achieve his murder and having the opportunity to murder Olivares, they decide not to kill him.”

Bullrich said authorities found the car used in the crime and have identified the suspects, but she said the motive has not been confirmed and is still being investigated.

Local TV broadcast images late Thursday of federal police officers escorting a man suspected of having links to the attack from his apartment into a police car. His face was covered by a hood, and authorities did not release any other details.

Olivares belongs to the Radical Civic Union party of the ruling government coalition and is also part of the transportation committee in the lower house. Before he was shot, he had been discussing a bill against hooliganism in Argentine soccer, which produces some of the world’s best players but is plagued by entrenched corruption and violence.

“If it does turn out the judicial investigations show there is a connection to politically motivated violence then we can definitely say that we’re facing a very grave institutional event,” Olivares’ spokesman, Ulises Bencina, told The Associated Press.

Another spokesman, Hector Lencinas, was quoted in the Buenos Aires Times as saying: "We never received any threats of any type in the office. It's an open office where everyone is welcomed. [Olivares] was very calm."

Attacks on politicians are unusual in Argentina, a country of about 44 million people, where the news usually centers on an ongoing economic crisis.

Politicians said the attack was the first of its kind since a brutal seven-year dictatorship from 1976-1983, during which thousands were killed, including some lawmakers.