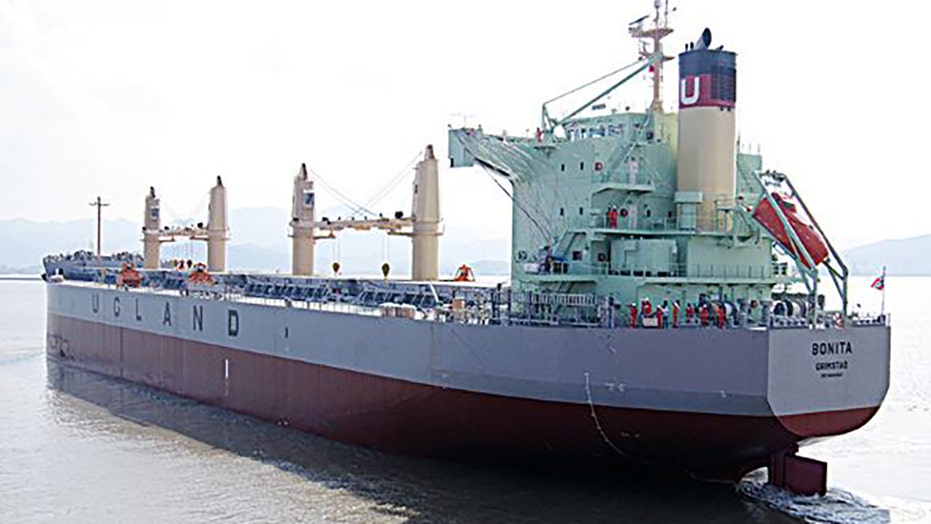 Nine crew members on a Norwegian-owned cargo ship were kidnapped Saturday when a group of pirates stormed the vessel off the coast of Benin in West Africa, the shipping firm said.

The MV Bonita was anchored offshore as it awaited berth at Cotonou Port to unload a shipment of gypsum, a mineral commonly used as fertilizer, when the pirates boarded, J.J. Ugland said in a statement Sunday.

The remaining crew members alerted authorities and docked at Cotonou later that day, the company said.

Further details, including the nationalities of the kidnapped crew members, how many of the crew remained on the ship and the pirates’ affiliation, were not immediately shared in the interest of the crew’s safety, the company said. It said the crew's families had been notified.

Pirates boarded a Norwegian-owned cargo ship and kidnapped nine crew members off the coast of Benin in West Africa on Saturday, the shipping firm said. (The J.J. Ugland Companies)

In a brief update on Monday, J.J Ugland confirmed the captain of the vessel was among those who were kidnapped.

“We are continuously working on the situation, and are doing our utmost to bring the nine crew members to safety,” the company said. “Their families will be gathered as soon as possible.”

PARENTS OF ISIS CAPTIVE KAYLA MUELLER BELIEVE DAUGHTER MAY STILL BE ALIVE: 'THAT 1 PERCENT CHANCE IS STILL THERE'

While piracy incidents have decreased this year, the Gulf of Guinea remained a “hot spot” for armed robbery and abductions at the hands of seafaring gangs, according to a report released last month by the International Maritime Bureau.

The report notes the area had several abductions in recent months, including 10 crew members kidnapped from a vessel in July and 17 taken from two ships off the coast of Cameroon in August. Those crew members were held hostage for weeks before being released.

Additionally, the report said there have so far been no piracy-related incidents in Somalia this year. Somali pirates infamously hijacked the U.S. containership Maersk Alabama in April 2009, holding its captain, Richard Phillips, hostage and prompting a rescue operation led by U.S. Navy SEALs. Capt. Phillips garnered national attention for his bravery.