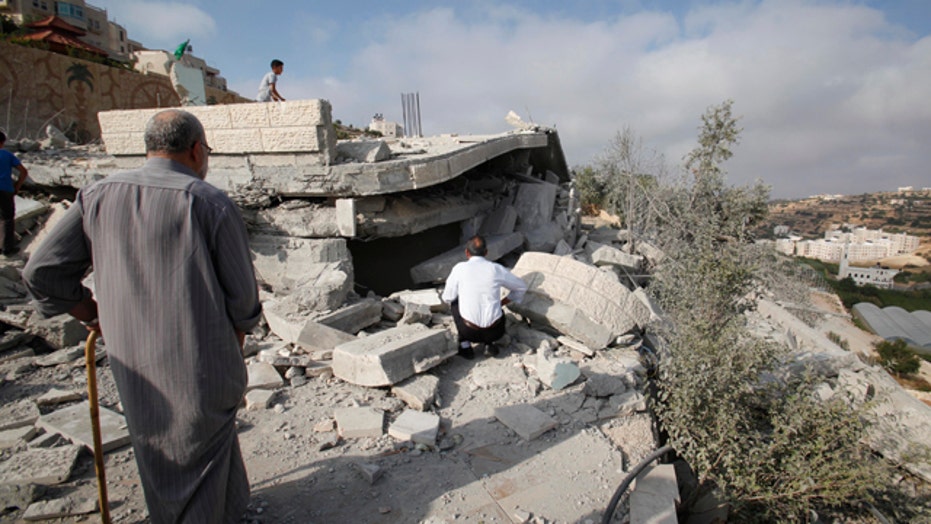 CAIRO – The Egyptian government announced a 24-hour extension in cease-fire talks between Israel and the Hamas militant group late Monday, less than an hour before a temporary truce was set to expire in the Gaza war.

In a statement, Egypt confirmed a deal had not been reached but that talks on a long-term arrangement in the Palestinian territory would continue.

Since last week, Egypt has been hosting indirect talks between Israel and Hamas aimed at ending a devastating monthlong war. Gaza Health Ministry official Ashraf al-Kidra said Monday the death toll from the fighting had jumped to more than 2,000 Palestinians, the majority of them civilians, while U.N. officials, who often take more time to verify figures, put the number at 1,976. Thousands of homes were destroyed, and tens of thousands of people remain huddled in special U.N. shelters. Israel lost 67 people, all but three of them soldiers.

Egypt met both sides late Monday, but gaps appeared to remain wide. Hamas is demanding an end to a seven-year Israeli-Egyptian blockade of Gaza that has devastated the local economy. Israel wants guarantees that Hamas, which fired thousands of rockets into Israel during the fighting, will be disarmed.

The Gaza blockade, imposed after Hamas seized control of Gaza in 2007, remained the main stumbling block. It has greatly limited the movement of Palestinians in and out of the territory of 1.8 million people, restricted the flow of goods into Gaza and blocked virtually all exports.

Israeli Prime Minister Benjamin Netanyahu already said this week he would not allow Hamas to win a diplomatic victory at the negotiating table.

An Egyptian compromise proposal has called for an easing of the blockade to allow more movement of goods and people in and out of Gaza. Although it would not disarm Hamas, it would give Abbas, whose forces were routed by Hamas in the 2007 takeover, a foothold back in Gaza and put him in charge of border crossings and internationally backed reconstruction efforts.

An official in Abbas' office said the Palestinian leader was supposed to arrive in Qatar, the base for top Hamas leaders, on Tuesday and stay until Friday.

During his stay, he is to hold meetings with Hamas leader Khaled Mashaal and the emir of Qatar on Tuesday. The official said Abbas would urge Mashaal and the Qataris to support the Egyptian cease-fire efforts. The official spoke on condition of anonymity because he was not authorized to speak to the media about internal deliberations.

Robert Serry, the U.N. special coordinator for the Middle East peace process, urged the parties "to reach an understanding on a durable cease-fire which also addresses the underlying issues afflicting Gaza."

"At the very least, we hope that the cease-fire will be extended and the situation will remain quiet," he said.

Palestinian negotiators said there was no desire for a return to fighting.

"The war is behind us now," said Ziad Nakhleh, head of the Islamic Jihad faction within the Palestinian delegation in Cairo. "We are not returning to war."

Hamas repeatedly has said it will not give up its weapons, while Israel says it needs to maintain some degree of control over Gaza crossings to prevent the smuggling of weapons and weapons production materials into the coastal strip.

In a possible move to pressure Hamas to soften its positions, Norway's foreign minister said Monday that his country and Egypt were planning to co-host a donor conference in Cairo for the reconstruction of Gaza. Boerge Brende said invitations would be sent out once there is an agreement in the Egypt-mediated truce talks with Israel.

Meanwhile, Israel's Shin Bet security service said Monday it had thwarted what it described as a Hamas coup attempt in the West Bank aimed at toppling Abbas, though it offered few details. The security agency said Hamas operatives had tried to stir up an uprising that would have led to the collapse of Abbas' Western-backed Palestinian Authority.

The Shin Ben said the plot was orchestrated by senior Hamas official Salah Arouri, who is based in Turkey and enjoys the support of the local officials there.

Neither Hamas nor Abbas had any immediate comment to the claim.

The fighting was precipitated by Israeli arrests of Hamas members in the West Bank following the abduction and killing of three Israeli teenagers. The Shin Bet said it uncovered the coup plot due to information gleaned from the arrests.

The three teens were slain in June in the West Bank. Their killings were followed by the slaying of a Palestinian youth in Jerusalem in what was a likely revenge attack.

Also on Monday, Israeli troops demolished the homes of two militants suspected in the abduction and killing of the three Israeli teenagers and sealed up the home of a third. Minor clashes were reported during the demolition, with Palestinian youths hurling rocks and stones at armored Israeli vehicles.

The top U.N. official in the Mideast said Monday that Gaza will require massive reconstruction and proposed expanding a U.N.-Israeli system to import construction materials into the Palestinian territory.

Robert Serry told the U.N. Security Council that ending the blockade of Gaza and addressing Israel's legitimate security needs have become even more urgent given "the unprecedented amount of destruction ... and the corresponding unprecedented level of humanitarian needs" suffered during the latest fighting between Israel and Hamas.

He said there are indications that "the volume of reconstruction will be about three times" what it was after the 2009 Hamas-Israel conflict.

Serry said approximately 16,800 housing units have been destroyed or severely damaged, affecting some 100,000 Palestinians. In addition, he said an estimated 108 installations belonging to the U.N. agency for Palestinian refugees were damaged along with the Gaza branch of his own office.

During the latest conflict, Israel discovered and destroyed dozens of cross-border tunnels. Israel has said it is willing, in principle, to ease Gaza border restrictions -- but only with safeguards that prevent weapons or goods with possible military uses, such as cement for building tunnels and bunkers, from reaching Hamas.