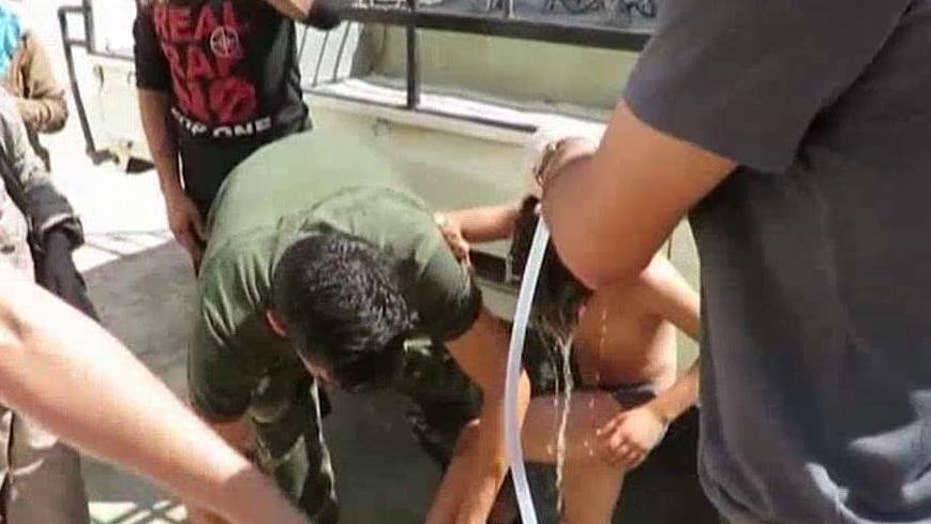 Syrian activists say at least 10 civilians have been killed in a new airstrike on the neighborhood where a suspected chlorine gas attack struck the previous day.

The Britain-based Syrian Observatory for Human Rights says at least one child was among the victims of Wednesday's strike on the al-Sukkari neighborhood in the contested city of Aleppo.

The Aleppo branch of the Syrian Civil Defense search and rescue organization put the initial casualty toll at 20 dead and more than 40 wounded but disparate tolls are common in the aftermath of airstrikes.

Another reported use of chlorine gas in besieged eastern #Aleppo City. Casualties include many children. pic.twitter.com/HTQ2jcL0kJ

Medical workers in the city have said the opposition-controlled neighborhood was hit with chlorine gas on Tuesday, though the report could not be independently verified.

Activists and medical workers say Syrian government and Russian jets are behind the attacks.

At least one person dies and more than 100 injured Tuesday's bombing, Al Jazeera reported. Syrian activists and rescue workers in the rebel-held part of the contested city said government warplanes dropped the suspected chlorine bombs on Tuesday on a crowded neighborhood.

The report could not be independently verified and it was not clear how it was determined that chlorine gas was released.

In Tuesday’s attack, a medical report from one of the hospitals in the besieged eastern rebel-held part of Aleppo was shared with journalists via text messages. It said at least 71 people, including 37 children and 10 women, were treated for breathing difficulties, dry cough, and that their clothes smelled of chlorine. The report said 10 of the patients were in critical care, including a pregnant woman.

Ibrahem Alhaj, a member of the Syria Civil Defense first responders’ team, said he got to the scene in the crowded al-Sukkari neighborhood shortly after a helicopter dropped barrels containing what he said were four chlorine cylinders. He said he himself had difficulty breathing and used a mask soaked in salt water to prevent irritation.

“Most of those injured where women and children,” he told the Associated Press in a telephone interview. “It is a crowded neighborhood.”

Chlorine gas is a crude weapon that can be fatal in high concentrations. In lower doses, it can damage lungs or cause severe breathing difficulties and other symptoms, including vomiting and nausea.