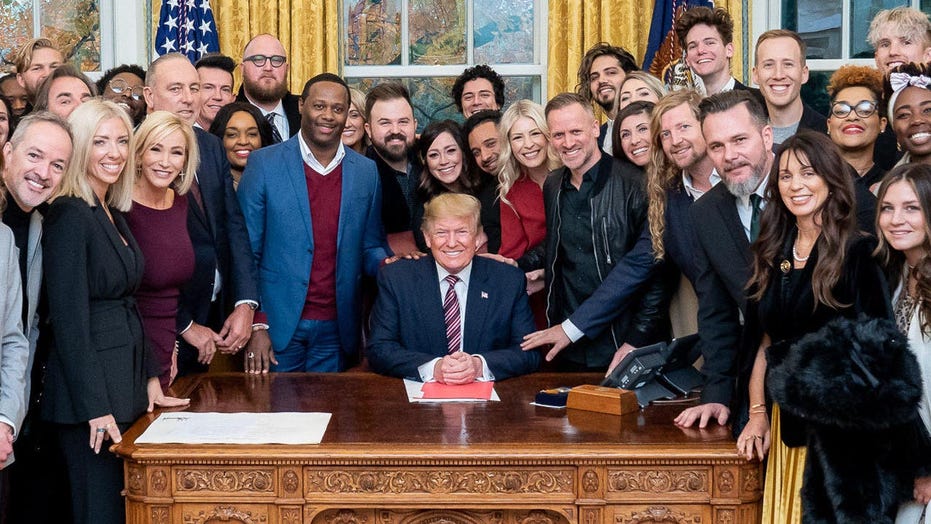 A worship pastor in South Bend, Ind., is getting attention for a song he wrote "calling out" evangelical supporters of President Trump.

Daniel Deitrich, the pastor for arts and worship at South Bend City Church, wrote "Hymn for the 81%," a reference to white evangelical Christian voters who helped secure Trump's victory 2016, as "a plea...to come home to the way of Jesus."

The anti-Trump pastor's song has over 400,000 views on YouTube. The lyrics accuse Trump evangelicals of "putting kids in cages, ripping mothers from their babies" and "weaponiz[ing] religion."

President Trump surrounded by a large group of worship leaders from across the country whom he invited to pray for him in the Oval Office. (Official White House Photo by Tia Dufour)

Deitrich told Religion News Service he originally wrote the song's bridge as "an angry middle finger to the listener" and found it "cathartic," but he toned it down and plans on releasing more songs.

WHAT ARE THE DEMOCRATIC PRESIDENTIAL CANDIDATES' RELIGIONS?

"There’s so much work to do to combat white supremacy, homophobia, transphobia, sexism — all the ways in which people are treated as less than the children of God that they are," he told RNS.

Although he has received praise from many on the left, Faithwire editor Tré Goins-Phillips said it isn't exactly a worship song.

Anti-Trump evangelicals have been vocal in the last few weeks in opposition to the president and his supporters.

Former editor-in-chief Mark Galli wrote an op-ed in Christianity Today called "Trump Should be Removed from Office," and a group of "Never Trump" Republicans released an attack ad called "The MAGA Church," mocking Trump's character and evangelicals' support of him.

The two events surrounded the Trump 2020 campaign's launch of "Evangelicals for Trump," where more than 70 prominent pastors came out in support of Trump's re-election bid.