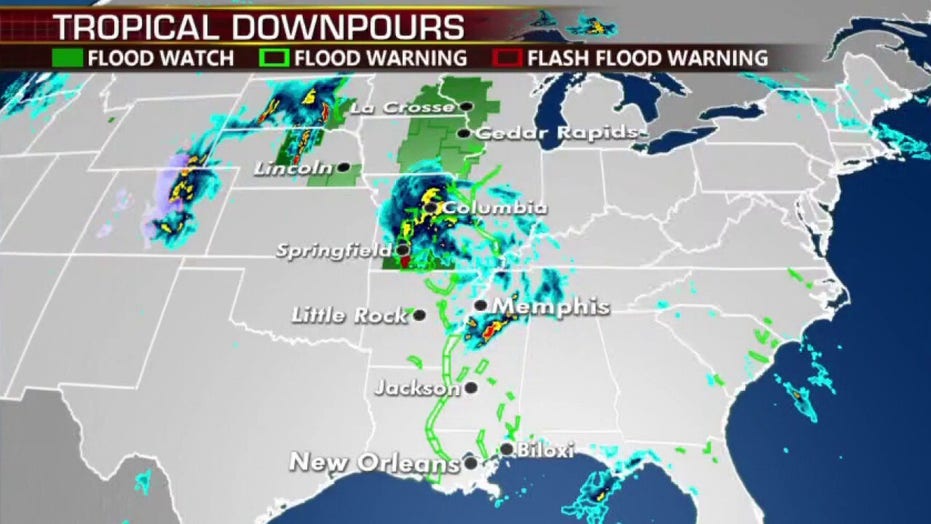 Tropical depression Cristobal is bringing heavy rain and flooding on Tuesday across parts of the Plains, the Mississippi Valley up into the Midwest and the Great Lakes.

The National Hurricane Center (NHC) said Cristobal is moving across Missouri with maximum sustained winds of 30 mph, bringing tropical downpours across the region.

Between 2 to 4 inches of rain is expected from Arkansas to the western Great Lakes through Wednesday morning, with isolated amounts up to 6 inches.

"This rainfall may produce flash flooding, and is forecast to produce new and renewed minor to moderate river flooding across portions of the lower Missouri and mid to upper Mississippi Valleys," the NHC said.

If Cristobal stays a tropical depression by the time it reaches Wisconsin, it will be a first for the state. Only three other tropical systems have tracked across Wisconsin since records began, but those were only remnants of earlier tropical storms.

The remnants of Cristobal will merge with a strong cold front that is helping to produce snow over the Colorado Rockies.

According to the National Weather Service's (NWS) Weather Prediction Center (WPC), this "complex interaction" will result in "a variety of active weather from the central to the northern portions of the country."

Snow across the Rocky Mountains will continue while the threat of severe weather develops across the central Plains through Tuesday night.

Cristobal, still moving northward, will actually intensify as it becomes a post-tropical storm by Tuesday night as it interacts with that strong cold front.

Wind gusts of up to 45 mph are expected in Chicago by Tuesday night, according to the NWS. Boaters were being warned of gale-force winds on nearby Lake Michigan on Tuesday and Wednesday.

High winds could be felt from Nebraska to Wisconsin, forecasters said. In parts of Iowa, Minnesota and South Dakota, the gusty winds and low humidity will actually bring the threat of wildfires in areas with dry grass.

Forecasters have warned that any potential blazes would spread rapidly due to the windy conditions.

As the two systems merge, they will also bring the threat of heavy downpours up for parts of the Plains and Midwest.

Tropical Depression Cristobal is forecast to merge with a new storm system and re-intensify as it moves over the Upper Midwest. (Fox News)

The Great Lakes will continue to see showery and windy conditions into Wednesday as the complex system intensifies further and heads into eastern Canada early on Thursday.

Cristobal weakened into a tropical depression early Monday after inundating coastal Louisiana, where it made landfall Sunday night, stirring up dangerous weather along most of the U.S. Gulf Coast.

Cristobal was the third named storm of the 2020 Atlantic hurricane season. (Fox News)

The storm was the third named storm of the 2020 Atlantic hurricane season, which forecasters have said will have above-average activity.

There have already been three storms by early June, even though hurricane season doesn't typically peak till late summer. (Fox News)

As Cristobal churns through the nation's midsection, dangerous heat continues for parts of the South on Tuesday.

Hot weather continues across the South, while a fire danger lingers in California on Tuesday. (Fox News)

Hot and humid tropical air brought by Cristobal will begin to spread over large portions of the eastern U.S. before cooler air filters behind a sharp cold front, according to the WPC.

Fire weather danger is elevated to critical for southern California and the Southwest.