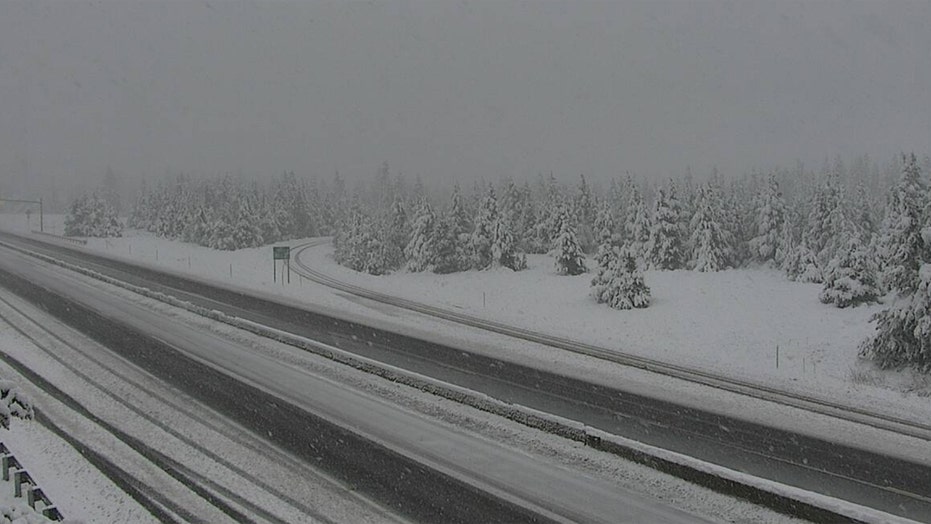 The summer solstice is just under two weeks away, and yet parts of the northern Rockies resemble a scene out of winter on Monday.

The NWS office in Missoula said a band of moderate to heavy snow developed along the Interstate 90 corridor from Deer Lodge to Butte, bringing several inches to the region.

Forecasters said an "anomalously cold and vigorous upper trough for early June," is swinging through the western U.S and northern Plains, bringing the threat for severe weather.

In the northern regions, the storm system is bringing accumulating snow.

Snow falls in Homestake Pass on Interstate 90 in Montana on June 8, 2020. (Montana DOT)

Winter weather advisories have been posted throughout the region, where up to 7 inches of snow could fall. Some residents reported seeing a foot of fresh powder.

Motorists in the area can expect slushy and snow-covered roads, visibilities to less than a half-mile.

"If you are traveling over mountain passes, be prepared for winter driving conditions and reduced visibility," the NWS said.

Forecasters say snow in the region is highly unusual for June and that people who may be camping are probably not prepared for such conditions. Frozen precipitation typically ends in May across the region.

"In addition to impacts to travel, the heavy, wet nature of the snow could cause vegetation with foliage to break," the NWS Great Falls tweeted.

Wind chills as low as the teens are expected on Monday for central, southwest, and west-central Montana.

After the snow stops, cold conditions are expected to stick around through Tuesday morning, spurring frost and freeze warnings for parts of the area.

That same cold front bringing heavy snow over the Northern Rockies is going to fuel severe storms for the Northern and Central Plains, according to Fox News Senior Meteorologist Janice Dean.