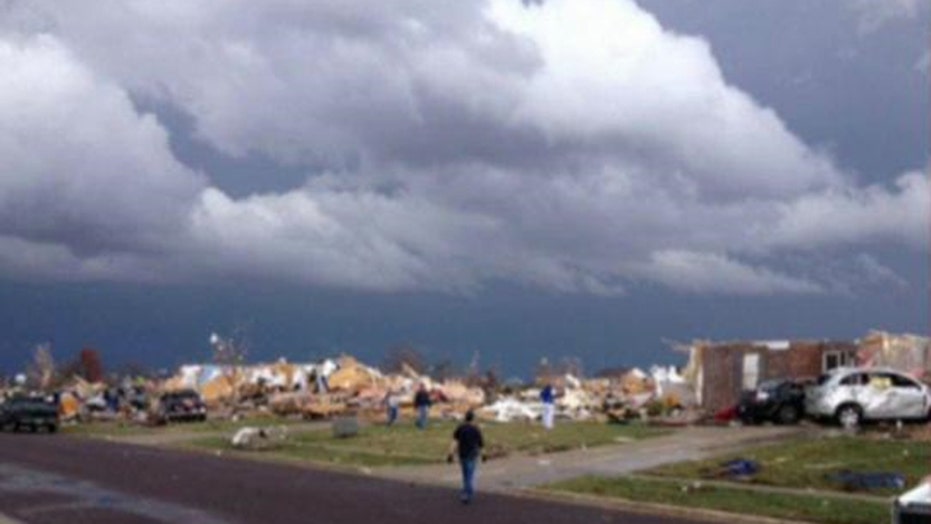 Intense thunderstorms and tornadoes swept through the Midwest Sunday and caused significant damage in parts of central Illinois. At least six people were killed and neighborhoods were leveled, leaving authorities picking through rubble in search of those who may be trapped.

“Literally, neighborhoods are completely wiped out,” Rep. Aaron Schock, R-Ill., who said he was in Washington, told Fox News. “I’m looking at subdivisions of twenty to thirty homes and there’s not a home there.”

“The entire town of Washington is devastated,” he added.

Schock said the town has put out a call for physicians and nurses from surrounding areas after a tornado swept through the town midday.

“Many of these people thankfully took shelter in their basements but some of them didn’t and so there are some folks needing medical assistance and they have been finding them through the rubbish,” he told Fox News.

Firefighters are going house to house in Washington to look for people who may be trapped. The Illinois National Guard is also dispatching 10 firefighters to Washington to search for survivors.

"I stepped outside and I heard it coming. My daughter was already in the basement, so I ran downstairs and grabbed her, crouched in the laundry room and all of a sudden I could see daylight up the stairway and my house was gone," Michael Perdun, a Washington resident, said Sunday afternoon in an interview with The Associated Press on his cellphone. "The whole neighborhood's gone. The wall of my fireplace is all that is left of my house."

Several blocks of houses had been erased from the landscape in the rural community of 16,000, where Illinois State Police Trooper Dustin Pierce said the tornado cut a path from one end of town to the other, knocking down power lines, uprooting trees and rupturing gas lines.

"I went over there immediately after the tornado, walking through the neighborhoods, and I couldn't even tell what street I was on," Washington Alderman Tyler Gee told WLS-TV.

By nightfall, Trooper Pierce said there were reports of looting in Washington.

Earlier in the day, the county coroner in Washington County in southern Illinois said that an elderly man and his sister died when a tornado struck their farm house in the town of New Minden, about 50 miles southeast of St. Louis.

Candi Cross, the mayor of New Minden, told Fox News that residents in the town are volunteering to take in others whose homes have been damaged.

"Everybody has a place to go to tonight," she said.

A third person died in Washington, while three others perished in Massac County in the far southern part of the state, according to Patti Thompson of the Illinois Emergency Management Agency. She did not provide details.

At OSF Saint Francis Medical Center in Peoria, spokeswoman Amy Paul said 37 patients had been treated, eight with injuries ranging from broken bones to head injuries that were serious enough to be admitted. Another hospital, Methodist Medical Center in Peoria, treated more than a dozen, but officials there said none of them were seriously injured.

Thompson said communications in the area are spotty and it's difficult to get information from the scene.

“This is a very dangerous situation," said Russell Schneider, director of the weather service's Storm Prediction Center. "Approximately 53 million in 10 states are at significant risk for thunderstorms and tornadoes."

Just how many tornadoes hit was unclear Sunday afternoon. According to the National Weather Services' website, a total of 65 tornadoes had struck, the bulk of them in Illinois. But meteorologist Matt Friedlein said the total might fall because emergency workers, tornado spotters and others often report the same tornado.

Fox News meterologist Janice Dean said the stormfront could spur one of the top five outbreaks of tornadoes in November on record. The highest outbreak of tornadoes was in 1992, with 105 being reported between Nov. 21-23. Officials said the last such severe weather warning issued so late in the season in November came in 2005, and the result was an outbreak of 49 tornadoes.

In Chicago, storms raced through the downtown area so powerfully that the rain was not falling as much as it was slamming into the sides of buildings. There were no confirmed reports of injuries. Heavy rain, high winds, and lightning delayed the NFL game between the Chicago Bears and Baltimore Ravens for around two hours while fans evacuated the stands.

Weather service officials confirmed that a tornado touched down just before 11 a.m. near the central Illinois community of East Peoria, but authorities did not immediately have damage or injury reports. Within an hour, the weather service said that tornadoes had touched down in Washington, Metamora, Morton and other central communities, though officials could not say whether it was one tornado touching down or several. Weather officials said it was moving northeast about 60 mph; East Peoria is about 150 miles southwest of Chicago.

Schneider noted that the storms are moving at 60 mph, which he said will not give people enough time to seek shelter if they're relying on watching the sky alone.

The potential severity of the storm this late in the season also carries the risk of surprise.

"People can fall into complacency because they don't see severe weather and tornadoes, but we do stress that they should keep a vigilant eye on the weather and have a means to hear a tornado warning because things can change very quickly," said Matt Friedlein, a weather service meteorologist.

The White House said President Obama has been briefed about the severe weather.

"The White House will continue to stay in touch with our federal partners, including FEMA, as well as the state and local partners in the impacted states," it also said in a statement.

In McHenry County, northwest of Chicago, funnel clouds were spotted late Sunday morning, dropping out of the clouds and then retreating again, said Bob Ellsworth, the assistant director of the county's emergency management agency. Ellsworth added that none had touched the ground or caused any damage.

The weather service also issued a tornado warning for parts of Kenosha, Racine and Walworth counties in Wisconsin.

Friedlein said that such strong storms are rare this late in the year because there usually isn't enough heat from the sun to sustain the thunderstorms. But he said temperatures Sunday are expected to reach into the 60s and 70s, which he said is warm enough to help produce severe weather when it is coupled with winds, which are typically stronger this time of year than in the summer.

"You don't need temperatures in the 80s and 90s to produce severe weather (because) the strong winds compensate for the lack of heating," he said. "That sets the stage for what we call wind shear, which may produce tornadoes."