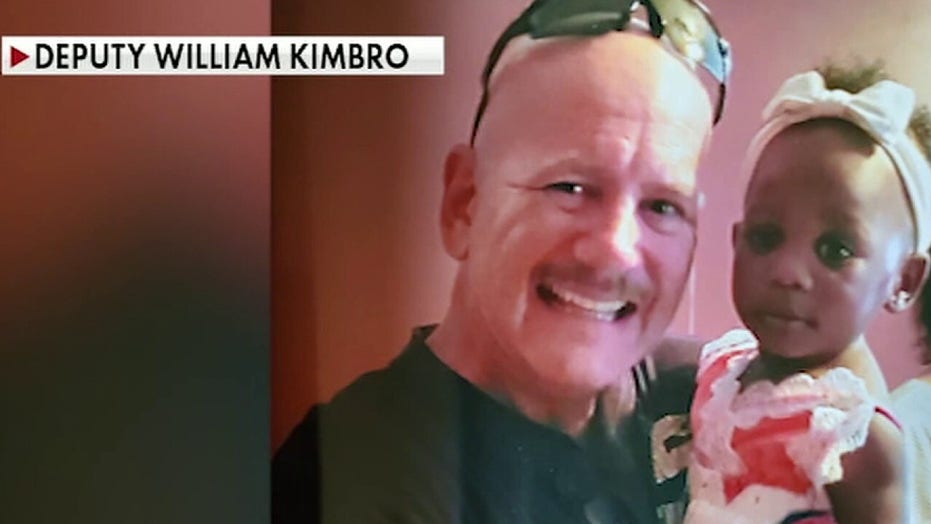 Law enforcement has been under fire for weeks now, demonized by activists and politicians, following the death of George Floyd on May 25, with calls to defund and dismantle the police, but here are a few examples highlighting the good officers do for their communities.

This week, South Carolina Deputy William Kimbro, who saved Kemira Boyd’s choking daughter during a traffic stop in 2019, became Ryleigh’s godfather, making the routine call a “life-long bond” for both of them.

“I’m so happy and just blessed. It’s the world to me,” Kimbro told “Fox & Friends First” about the new honor.

Saving a choking baby at a protest

It was later learned the boy had swallowed a coin, which got stuck in his throat and blocked his airway, officials said. (Los Angeles County Sheriff's Office)

In a similar story, the Los Angeles County Sheriff’s Department shared video this week of a California sheriff’s deputy, who was monitoring a protest last month, jumping into action to save an 11-month-old baby.

The dramatic footage shows two women running into a parking lot after the baby boy stopped breathing during a demonstration at a park in Palmdale, about 60  miles north of Los Angeles, on May 31, after he swallowed a coin.

The baby’s mother stopped to pat his back and the other woman flagged down Deputy Cameron Kinsey, who was monitoring the protest.

“None of that other stuff matters,” Kinsey said in a statement. “Just the baby.”

Kinsey immediately assessed the situation, and using his finger, performed a “mouth sweep” to clear vomit from the child’s mouth. After several blows to the boy’s back, he began breathing again before paramedics arrived and took him to the hospital.

“Mom did the right thing,” Kinsey told the Antelope Valley Press. “She was quick-thinking and started patting him on the back to dislodge whatever he had stuck in there. I saw that. I saw she was scared and kind of frantic, so I ran over and I grabbed the baby. At that point, training just took over.”

Pennsylvania police save man from jumping off bridge

With the aid of a Good Samaritan, Pittsburgh Police plainclothes officers saved the life of a man dangling his legs off a bridge, WTAE-TV reports.

Pittsburgh Public Safety shared a video of the dramatic moment.

Two officers arrived Monday morning to a man--sitting on the edge of the Roberto Clemente Bridge--who told officers he was going to hurt himself by jumping on the 10th street bypass.

When officers were close enough, they grabbed him from behind and took him to Western Psych where he will receive help.

San Diego Police Department K9 Officer Jonathan Wiese is being praised by colleagues for scaling down the side of a cliff to rescue twin 2-year-old sisters after their father allegedly drove off a bridge, flipping their car upside-down into the ocean below.

Wiese was the first to arrive on scene after the girls’ mother called the San Diego Sheriff’s Department at 4:30 a.m. Saturday morning to report her daughters’ father was suicidal and threatened to drive off the Coronado Bay Bridge, police told the Times of San Diego.

The 22-year-year veteran of the force immediately jumped into action, using a 100-foot leash in his patrol car from SWAT missions, removed his gun belt, tied the tether around his waist, “and by then, four or five other cops had shown up, so I pretty much threw the end of the leash to them and then I said, 'hang on,' and I just jumped off.”

After being lowered 30 feet down the side of the cliff, Weise said he drew on his previous water rescue training to reach the father and girls and successfully tow them to the rocks. One girl suffered minor injuries, while the other was hospitalized in critical condition. However, both are expected to make a full recovery, police said.

“I didn’t do the job to be liked every day, I didn’t do it to become rich. I did it because I want to be out there making a difference and helping people, as cliché as that might sound, but I was just glad I could be there,” Wiese told KGTV. “You just do what you have to do, but after everyone was safe, it hits you and you just want to go home and hug your kids, that’s for sure.”

Weise, a father of a daughter, 2, and a son, 4, was awarded the Officer of the Year last year, for arresting the gunman who opened fire at the Chabad of Poway synagogue in Poway, Calif., about 20 miles north of San Diego, on April 27, 2019. 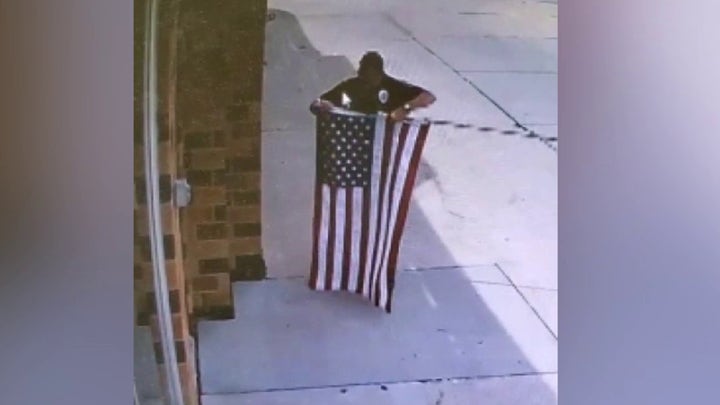 A Nebraska cop was caught on surveillance video attempting to rehang a fallen American flag outside an auto repair shop Sunday.

A security camera from Kearney Tire & Auto Service videotaped the cop folding the flag and placing it against the building after he noticed the flag holder was damaged.

“We were out of town on Sunday and this kind officer stopped to rescue [Old Glory] and show the respect it deserves when our holder broke,” the shop wrote in a Facebook post.

“I couldn’t be more proud of our officers on the KPD,” the post read. “We were called right away with the issue and we were so thankful. We are blessed by each officer and hold them in the highest regard for all they do to keep us safe. From the bottom of our hearts, Thank You!!”

Cops aid mom after employees call police on her child

Nadina Newsman entered the Jenkintown restaurant location with her son Colin, who in addition to his autism also suffers from Down Syndrome and is non-verbal, according to ABC 6.

Newsman said she went to pick up dinner for her family, when her car broke down. She said she donned a mask but, because of the hot weather, allowed her son to go without one.

"It was 91 degrees outside, Colin wasn't feeling well, we needed to go inside so Colin could cool off," she told ABC 6. "So I asked her [the employee] if we could sit there for about 15 minutes until our ride came and she said 'I have to call the owner.'"

Newsman said she was really “shocked” that the Boston Market employee didn’t have “proper training, the proper information and nor did she have common sense.”

The officer arrived and gave her and her son a ride home. No charges have been filed.

"The police arrived and were problem solvers and peacemakers," Abington Deputy Chief Kelley Warner said. "Officer McMenamin did his job and we couldn't be more proud."

And despite calls for abolishing the police at some demonstrations, images of officers and protesters embracing and showing signs of unity have emerged.

Officer Garren Hoskins prayed with a protester in Nashville earlier this month in an image that went viral.

"It was very touching," Hoskins told the media. "That gentleman was such a nice guy. I believe it created a solidarity there between him expressing his freedom of speech and me there as a police officer and that's something the world needs to see."