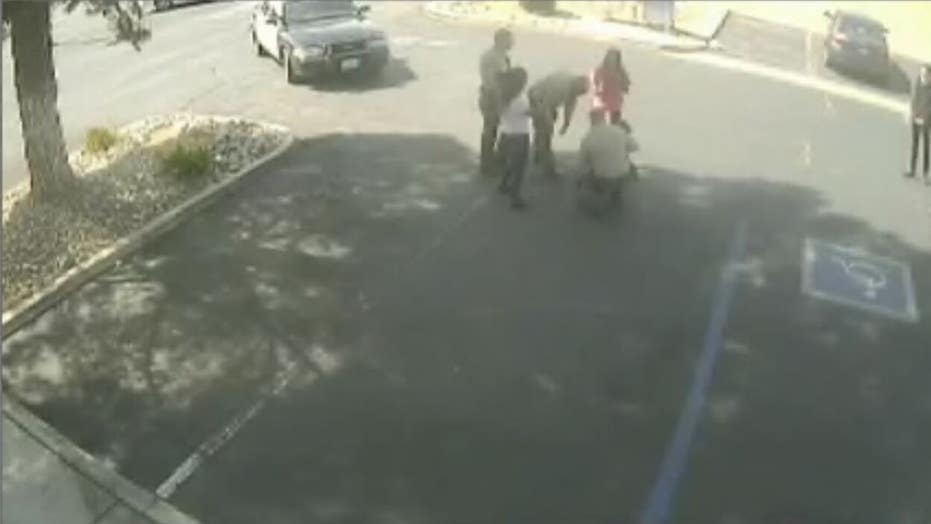 California deputy rushes to save infant during protest

A Palmdale Sheriff's Station deputy rushed to save 11-month-old boy who had stopped breathing during a demonstration at a nearby park. The child was in attendance at the protest with his mom when he began choking on a coin.

A California sheriff’s deputy monitoring a protest last month jumped into action to save a baby who swallowed a coin and couldn't breathe.

The 11-month-old boy stopped breathing during a demonstration at a park in Palmdale, about 60 miles north of Los Angeles, on May 31, the Los Angeles County Sheriff's Department said.

The department this week shared a two-minute surveillance video of the rescue, which showed two women running with the limp child through a supermarket parking lot in search of help.

As the baby’s mother stopped to pat his back, the other woman flagged down Deputy Cameron Kinsey, who was monitoring the protest, officials said.

“None of that other stuff matters,” Kinsey said in a statement. “Just the baby.”

Kinsey rushed to the baby and immediately assessed the situation, using his finger to perform a “mouth sweep” and clear vomit from the child’s mouth, officials said. After several blows to the boy’s back, he began breathing again. Paramedics arrived and took the child to a hospital.

The boy had swallowed a coin, which got stuck in his throat and blocked his airway, officials said, adding that Kinsey’s actions turned the coin sideways and allowed the child to breathe again.

But Kinsey isn’t taking full credit, praising the mother for her quick thinking.

“Mom did the right thing,” Kinsey told the Antelope Valley Press. “She was quick-thinking and started patting him on the back to dislodge whatever he had stuck in there. I saw that. I saw she was scared and kind of frantic, so I ran over and I grabbed the baby. At that point, training just took over.”