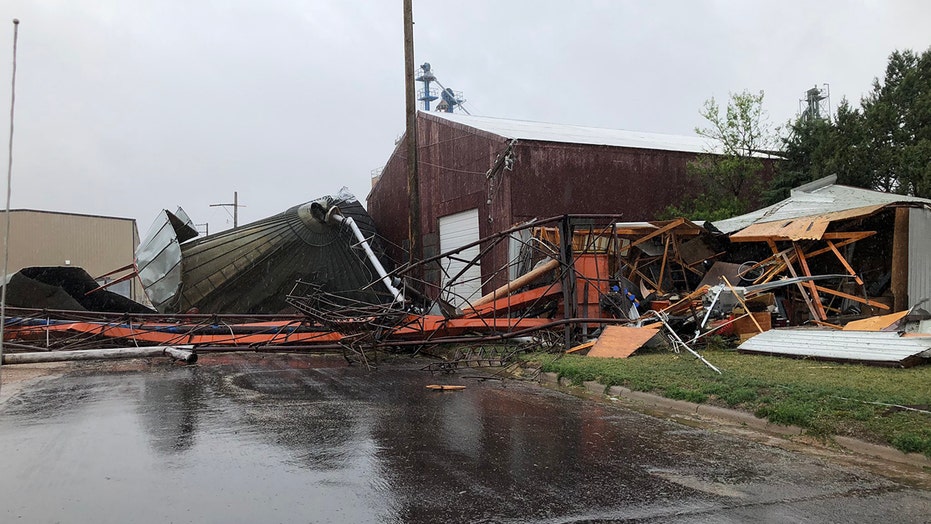 A town in eastern Colorado sustained "significant" damage after an apparent microburst brought winds of 102 mph early Tuesday, according to officials.

The Colorado Division of Homeland Security and Emergency Management said on Twitter that officials were assessing damage in Washington County after severe weather was reported earlier in the day.

Damaging winds were reported across Washington and Logan Counties after midnight, with a report of a 102 mph wind just outside of the town of Akron. Near the Colorado Plains Regional Airport just outside of Akron, another wind gust of 83 mph was reported.

The city itself saw winds of 68 mph. The wind speeds the region saw were comparable to that of a minimal tornado or even Category-2 hurricane-force winds.

Reports submitted to the NWS said between 40 to 50 power poles were knocked down, large trees are down and multiple carports were removed from homes.

Photos from DHSEM Regional Field Manager Kevin Kuretich show damage around the Akron area, including a small plane that was flipped over by the winds.

Severe damage was reported in Akron, Colo. after severe winds were reported in the area on Tuesday morning. (Colorado Division of Emergency Management)

There were also storm reports of several outbuildings and grain silos that were demolished. Even a radio tower was reported to have been folded in half.

It was not clear if any injuries were reported, according to FOX31. The NWS has yet to confirm if the damage was from a microburst or straight-line winds from a thunderstorm.

The National Oceanic and Atmospheric Administration's National Severe Storms Laboratory defines a microburst as a small, concentrated downburst in a thunderstorm that produces an outward flow of strong winds at or near the surface.

Severe damage was reported in Akron, Colo. after severe winds were reported in the area on Tuesday morning. (Colorado Division of Emergency Management)

"Microbursts can cause extensive damage at the surface, and in some instances, can be life-threatening," according to the NWS.

Microbursts are typically small, less than two and a half miles, and last only about five to 10 minutes, with maximum wind speeds that sometimes exceed 100 mph, the NSSL notes.

In addition to impacts on the ground, microbursts can also create dangerous wind shears that may affect aircraft performance.

This graphic from the National Weather Service shows the impacts that are present from microbursts. (NWS Birmingham)

Since wind speeds can reach up to 100 mph or higher and damage homes or level trees, forecasters stress that people who are in areas when severe thunderstorms strike should take precautionary measures. Even with modern radar, microbursts can be hard to detect since they are so short-lived.

The storm system that brought the violent weather also caused several inches of snow to fall in the mountains early Tuesday. The system will merge with Tropical Depression Cristobal by Wednesday morning.