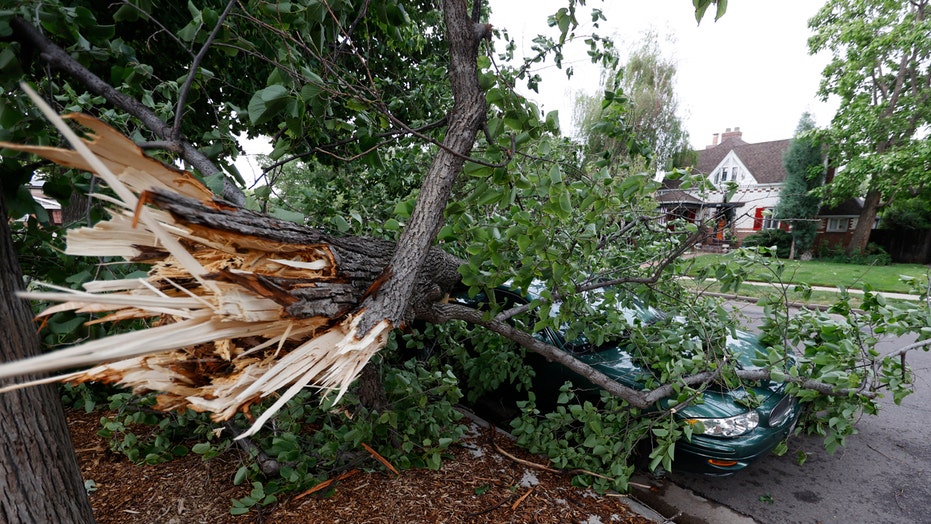 A powerful line of severe thunderstorms known as a derecho roared Saturday across the West, and forecasters described it as a rare event that left damage from Utah all the way to North Dakota.

The SPC report compiled by Leitman showed that based on preliminary data, the derecho began in southern Utah around 9 a.m. MDT and lasted until 8:52 p.m., when it reached North Dakota.

Dust envelopes the skyline of downtown Denver as a derecho moved through the region on Saturday, June 6, 2020. (AP Photo/David Zalubowski)

Leitman noted there were only two other derechoes in the Great Basin that are well noted.

The highest measured wind gust was 110 mph at the Winter Park ski area in Grand County, Colo. That's approaching the strength of a Category 3 hurricane.

A tree limb lays on a sedan after a storm packing high winds and rains ripped through the region Saturday, June 6, 2020, in Denver. (AP Photo/David Zalubowski)

In the Denver area, the storms caused damage and power outages across the region as they roared in on Saturday.

Homeowner Donna Purdy, right, thanks a tree trimmer after he checked the fallen tree that barely missed the woman's home east of Washington Park after a derecho ripped through the region on Saturday, June 6, 2020. (AP Photo/David Zalubowski)

A billboard blown over by the strong winds crushed a business and several cars, and a container was also blown over onto another vehicle in Denver, FOX31 reported.

Some 79,000 customers in the Denver metro area were without power at the height of the storm.

A branch from a large tree lays on a sedan parked along Franklin Street after a storm packing high winds and rains ripped through the region Saturday, June 6, 2020, in Denver. (AP Photo/David Zalubowski)

Video posted to Twitter also showed a tree falling on a car in Denver.

The derecho that roared across the Great Basin on Saturday came less than a week after another derecho left four people dead and thousands without power in the Northeast.

Derechos typically form east of the Rocky Mountains, which made Saturday's event so rare.

It may have been the first in recorded history to form west of the Rockies and cross the Continental Divide, according to CBS4.