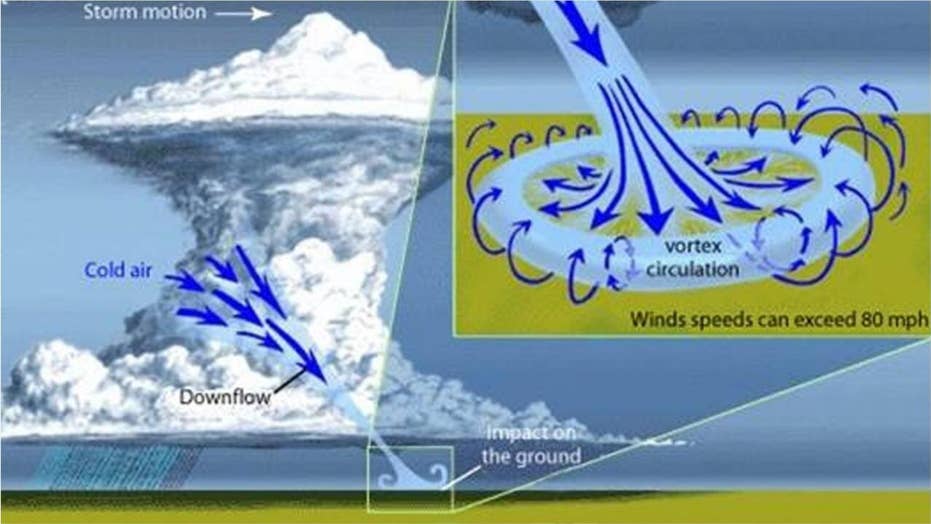 When severe weather strikes, one of the most destructive things wind can do, other than form a tornado, is create what is known as a "microburst."

The National Oceanic and Atmospheric Administration's National Severe Storms Laboratory defines a microburst as a small, concentrated downburst in a thunderstorm that produces an outward flow of strong winds at or near the surface.

"Microbursts can cause extensive damage at the surface, and in some instances, can be life-threatening," according to the National Weather Service.

Microbursts are typically small, less than two and a half miles, and last only about five to 10 minutes, with maximum wind speeds that sometimes exceed 100 mph, the NSSL notes.

A microburst is a small, concentrated downburst within a thunderstorm that produces an outward burst of strong winds at or near the surface (iStock)

In January 2020, a microburst in North Carolina tore apart an elementary school with estimated peak winds of 80 to 85 mph. Video released by the school district showed students playing in the gym before running away as the roof begins to fall in when the strong winds hit.

According to the NWS, microbursts are a column of sinking air within a thunderstorm. The strong surge of air spreads out in all directions upon hitting the ground, with the area where the microburst hits first receiving the highest winds and greatest damage.

Two kinds of microbursts are seen in the U.S. — wet ones and dry ones.

This graphic from the National Weather Service shows the impacts that are present from microbursts. (NWS Birmingham)

"A wet microburst is accompanied by heavy precipitation at the surface," according to the NSSL. "Dry microbursts, common in places like the high plains and the intermountain west, occur with little or no precipitation reaching the ground."

The NWS forecast office in Birmingham, Ala., notes that wet microbursts are common in the Southeast during the summer months.

In addition to impacts on the ground, microbursts can also create dangerous wind shears that may affect aircraft performance.

Since wind speeds can reach up to 100 mph or higher and damage homes or level trees, forecasters stress that people who are in areas when severe thunderstorms strike should take precautionary measures. Even with modern radar, microbursts can be hard to detect since they are so short-lived in order to show up on radar.

"It is very important that you take Severe Thunderstorm Warnings just as seriously as Tornado Warnings," the NWS notes.