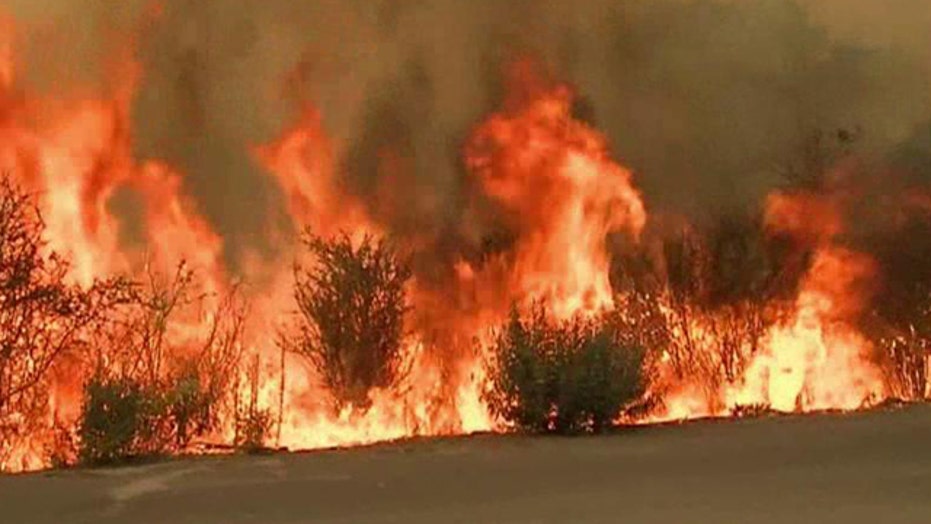 Fire crews reported progress on a 288-square-mile wildfire near Yosemite National Park that moved into the watershed that supplies San Francisco on Tuesday as crews elsewhere in sought to contain a fast-moving blaze that burned at least two homes and threatened others in a Northern California neighborhood.

Crews battling The Rim Fire are anticipating the temperatures and higher humidity this week may allow them to gain an upper hand in containing the blaze, which is is threatening thousands of structures and historic giant sequoias.

Containment held steady at 20 percent, but the number of destroyed structures rose to 111, and some 4,500 structures remained threatened. At least 31 residences were among those lost. Firefighters were making stands at Tuolumne City and other mountain communities.

The fire had ravaged 288 square miles by Tuesday night, the biggest in the Sierra's recorded history and one of the largest on record in California. Nearly 3,700 firefighters are currently battling the blaze, which is also a record.

Meanwhile, fire apparently sparked along a freeway spread to a grassy hillside, jumped into trees and then burned several homes in Fairfield, about 40 miles northeast of San Francisco.

Public Information Officer Gale Spears said two houses were completely destroyed and three others were damaged in the city of Fairfield, about 40 miles northeast of San Francisco. The homes were on Marigold Drive near Interstate 80.

Spears says fire crews worked quickly to protect dozens of threatened structures including houses and a nearby apartment complex. At least 50 homes were evacuated. Several cars in a parking lot along I-80 also went up in flames. Thick black smoke briefly shut two lanes of the interstate.

Weather conditions forecast for Wednesday may bring challenges in the morning for crews battling both fires as heavy smoke settles low to the ground, limiting visibility, but higher humidity was expected in the afternoon which could help dampen the flames, said Matt Mehle, a National Weather Service meteorologist assigned to the fire.

As flames from The Rim Fire lapped at the edge of the main reservoir that supplies San Francisco, fears that the inferno could disrupt water or power to the city diminished. On Tuesday the fire moved into the watershed, which increases the chances of sediment runoff this winter.

Crews remained confident Tuesday that they could protect hydroelectric transmission lines and other utility facilities at the reservoir, the chief source of San Francisco's famously pure drinking water.

So far the ash that has been raining onto the reservoir has not sunk as far as the intake valves, which are about halfway down the 300-foot O'Shaughnessy Dam. Utility officials said the ash is non-toxic but that the city will begin filtering water for customers if problems are detected.

Power generation there was shut down last week so firefighters would not be imperiled by live wires. San Francisco is buying replacement power from other sources to run City Hall and municipal buildings.

The last time fire ravages the northernmost stretch of Yosemite was 17 years ago.

Park officials cleared brush and set sprinklers on two groves of giant sequoias that were less than 10 miles away from the fire's front lines, said park spokesman Scott Gediman. While sequoias have a chemical in their bark to help them resist fire, they can be damaged when flames move through slowly with such intense heat.

“It was like a bomb went off, exploded,” Bentley told the station. “When the inversion lifted, the fog coming from the smoke, when it lifted, this fire exploded and it’s been running away ever since."

The fire has swept through steep Sierra Nevada river canyons and stands of thick oak and pine, closing in on Tuolumne City and other mountain communities. It has confounded ground crews with its 300-foot walls of flame and the way it has jumped from treetop to treetop.

Stratton said they would continue working to burn vegetation in the fire's path to slow its march toward town. He said that while the community remains in harm's way, "I'm pretty optimistic."

Meanwhile, biologists with the Forest Service are studying the effect on wildlife. Much of the area that has burned is part of the state's winter-range deer habitat. Biologist Crispin Holland said most of the large deer herds would still be well above the fire danger.

Biologists discovered stranded Western pond turtles on national forest land near the edge of Yosemite. Their marshy meadow had burned, and the surviving creatures were huddled in the middle of the expanse in what little water remained.

"We're hoping to deliver some water to those turtles," Holland said. "We might also drag some brush in to give them cover."

While it has put a stop to some backcountry hiking, the fire has not threatened the Yosemite Valley, where such sights as the Half Dome and El Capitan rock formations and Yosemite Falls draw throngs of tourists. Most of the park remained open to visitors.

Rugged terrain, strong winds and bone-dry conditions have hampered firefighters' efforts to contain the blaze, which began Aug. 17. The cause has not been determined.