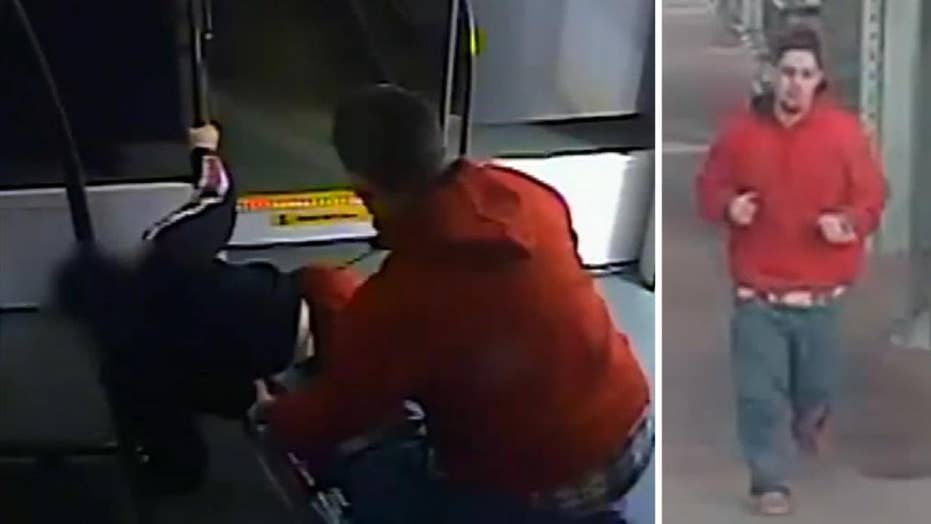 Crimes, unfortunately, happen every day across America, but there are some you read about that leave you scratching your head. Ranging from dancing with lions to police pursuits involving toy trucks, here are seven of the weirdest and most bizarre crime stories of the year.

A man in Arizona wearing reindeer slippers managed to ‘dash’ away from this scene – but law enforcement caught up to him anyway.

Austin Shurbutt, 26, was arrested in December after being seen on a surveillance video trying to take a woman’s wheelchair out from underneath her while onboard a train in Phoenix, police say.

Authorities credited “hero passengers” on the light rail for coming to the woman’s rescue and Shurbutt was nabbed after thousands shared his picture online.

"Despite his reindeer slippers, this criminal was NOT spreading holiday cheer," the Phoenix Police Department said, while also noting that Shurbutt “was still wearing the reindeer slippers when he was arrested.”

Bank robber hands teller a note with his name, address on it

Some bank robbers wear wigs. Others put on masks. This one, investigators say, apparently made little effort to conceal his identity.

Michael Harrell, 54, was arrested in August after ordering a teller to hand over cash from a U.S. Bank location in Cleveland -- using a note that had his full name and address on it, the FBI says. It reportedly was written on the back of a document from the Ohio Bureau of Motor Vehicles.

Michael Harrell, 54, robbed a U.S. Bank in Cleveland, Ohio, in July after handing a teller a note with his name on it, the FBI says. (Cleveland Division of the FBI via WJW)

The teller referred to Harrell by his name and gave him an unknown amount of money before calling 911, according to investigators. He was taken into custody a few days later.

Unsurprisingly, an FBI agent at the time said “when you present a note that has your name already on it, and address, it helps law enforcement tremendously.”

Police working this case must have felt some serious déjà vu.

A man in Kansas was arrested in November for driving a stolen SUV to bail out his brother, who had been jailed only hours earlier for stealing a separate SUV, authorities said.

The first sibling caught was 36-year-old Eric Dean McCracken. He was arrested for driving a Chevy Trailblazer with a suspended license, the Jackson County Sheriff’s Office said. Police then revealed they learned the SUV had been reported stolen.

Hours later, his younger brother, 32-year-old Keith Ray McCracken, was arrested after leading deputies on a short chase in a stolen 2015 Chevy Silverado that authorities were tracking through its GPS, the sheriff’s office said.

“It is believed that the younger McCracken was en route to the Jackson County Jail to post bail on his older brother in a stolen vehicle,” it added. They since were reunited in the jail.

The lion had no idea what to think.

A New York woman went viral in September after being caught on video dancing in front of a big cat at the Bronx Zoo.

The woman does a short dance as the lion looks on confused.

Footage taken after 32-year-old Myah Autrey breached the African Lion's enclosure shows her standing just a few feet away from the ferocious feline, who simply stares back, apparently baffled by the woman's presence.

Per the New York Post, the woman later posted videos and photos of the close encounter on Instagram -- even going so far as to taunt the NYPD, who'd sought her on two counts of criminal trespass after she broke into the lion's den and a giraffe enclosure. She eventually was tracked down and arrested in November.

Man allegedly steals from store, then comes back to ask for a job application

There are plenty of ways to try to make your job resume stand out from the pile – but this isn’t one of them.

A man who applied for a position at a sporting goods store in Wyoming in April allegedly stole from the business twice on the same day, investigators say.

The unidentified 36-year-old man first bought some items with a rewards card, but did not pay for a pair of sunglasses and ammunition while he was there, the Gillette News Record reported.

He then returned about three hours later -- this time, to ask for a job application. The man allegedly left the store after that encounter with two more pairs of sunglasses, according to the newspaper.

The suspect — whose job application status wasn’t clear — was cited for the alleged thefts. Police said they recovered the items.

The quickest way to launch a pro wrestling career is to… grab a child’s motorized toy truck and get pulled over by police?

South Carolina police in June charged a woman in Walhalla with public intoxication after she allegedly was found cruising down the road in a silver Power Wheels truck not far from her home, reports said.

Police said 25-year-old Megan Holman avoided a DUI charge because her mode of transport was a toy, not a vehicle, according to BuzzFeed News.

When investigators asked Holman to explain the situation, she said she was riding the toy truck as part of a scavenger hunt and that “she wanted to be a professional wrestler like her father and this was how to do it”, The State newspaper reported.

Women swipe stroller from store, but leave one of their children behind

If you’re going to make a run for it, don’t leave anyone behind.

Three women apparently didn’t get that concept in August when they were caught on camera allegedly stealing a baby stroller from a New Jersey store – only to be busted after one of them forgot their child inside the shop.

Two of the women had distracted an employee at the Middletown store while the third woman went to the front to grab a stroller, police said. The women left the store, but one of them left behind some precious cargo — her own child.

Investigators later arrested at least two of the women and the stolen stroller was returned.