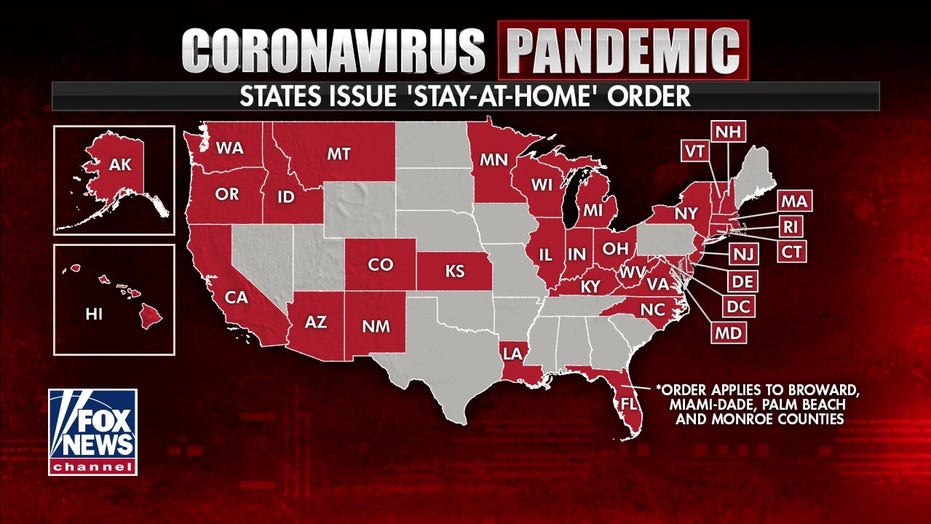 31 states, Washington, D.C. and Puerto Rico have issued stay-at-home directives to residents with some threatening jail time or fines.

About 3 of every 4 Americans are now under orders to stay at home -- or will be soon -- as more states have imposed restrictions in an attempt to slow the spread of coronavirus amid a growing nationwide death toll.

As of Tuesday morning, there are at least 164,610 positive cases of COVID-19 and at least 3,170 deaths, according to a tally by Johns Hopkins University. Some 5,945 people have recovered from the virus nationwide. The death toll from the virus in the U.S. is set to overtake the reported number out of China, figures that have been disputed by locals.

In New York, the epicenter of the nation's outbreak with over 67,000 cases reported, Gov. Andrew Cuomo warned Monday that the crisis the Empire State is just a preview of what other communities across the nation may face in the weeks ahead.

The death toll in New York state climbed by more than 250 people in a day Monday to more than 1,200, most of them in New York City.

Cuomo put out a call for medical workers to head to the nation's fourth most populated state as thousands have already stepped up to volunteer and the USNS Comfort hospital ship arrived to help relieve the strain on local hospitals.

More than 235 million people live in the 33 states where governors have declared statewide orders or recommendations to stay home.

At least 33 states where governors have declared statewide orders or recommendations to stay home. (Fox News)

Arizona Gov. Doug Ducey, a Republican, became the latest state leader on Monday to issue a stay-at-home order that takes effect at 5 p.m. on Tuesday and lasts until April 30.

"The time for further action is now," Ducey told reporters.

The order impacts all activity that is not essential but still allows people to go outside, according to FOX10.

"We do not want people to feel trapped or isolated in their homes,” he said Monday. “The weather is beautiful right now. Find a way to get out and enjoy it — with physical distancing."

In the nation's capital, Mayor Muriel Bowser’s government, in coordination with neighboring governors in Maryland and Virginia, issued a stay-at-home order Monday for Washington D.C.’s approximately 700,000 residents. Bowser has declared a state of emergency, shuttered all schools and ordered all non-essential businesses to close.

Anyone who violates the order in the District of Columbia may be fined up to $5,000, spend 90 days in prison, or both, according to FOX5.

Residents are only allowed to engage in "essential activities" such as obtaining medical care, food, essential household goods and "allowable recreational activities" defined by the mayor's order.

White House and Capitol tours have been canceled and the National Zoo, Smithsonian museum network and Kennedy Center also have closed. 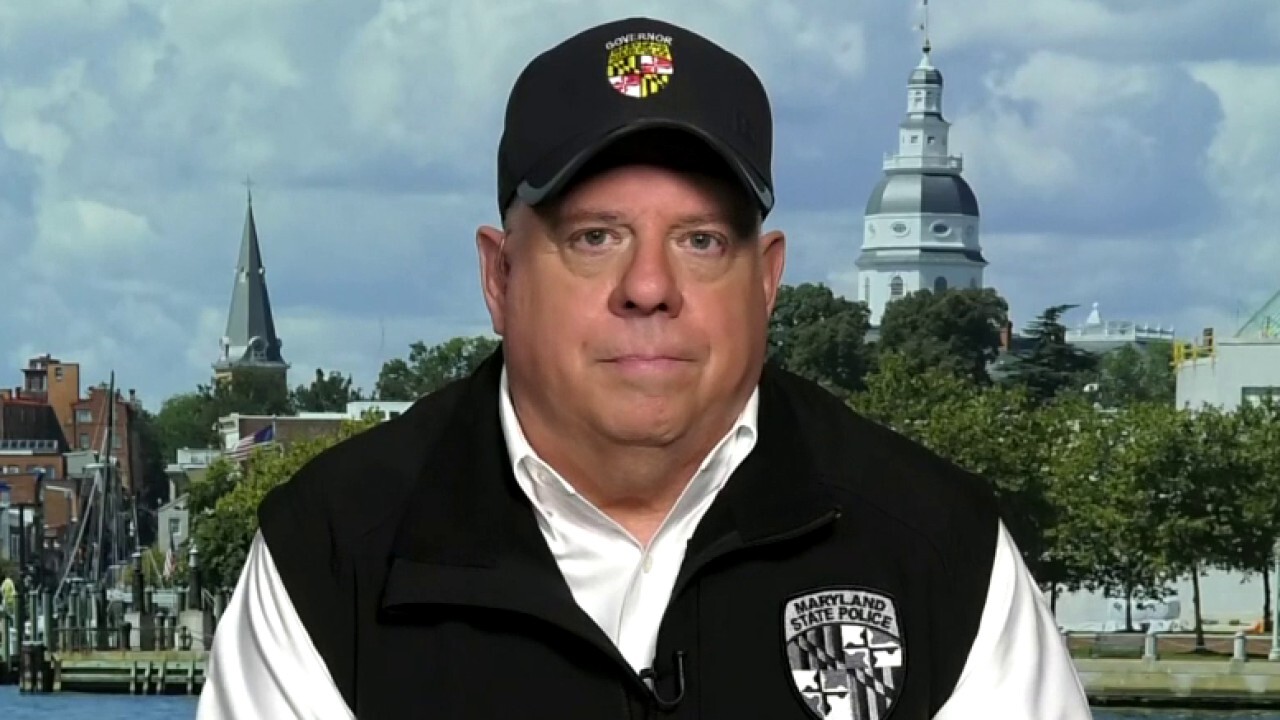 “Over the past week, cases have more than quadrupled in the Washington metro area [Washington, D.C. Maryland, and Virginia],” he noted, comparing the trajectory of cases to New York City a few weeks ago. 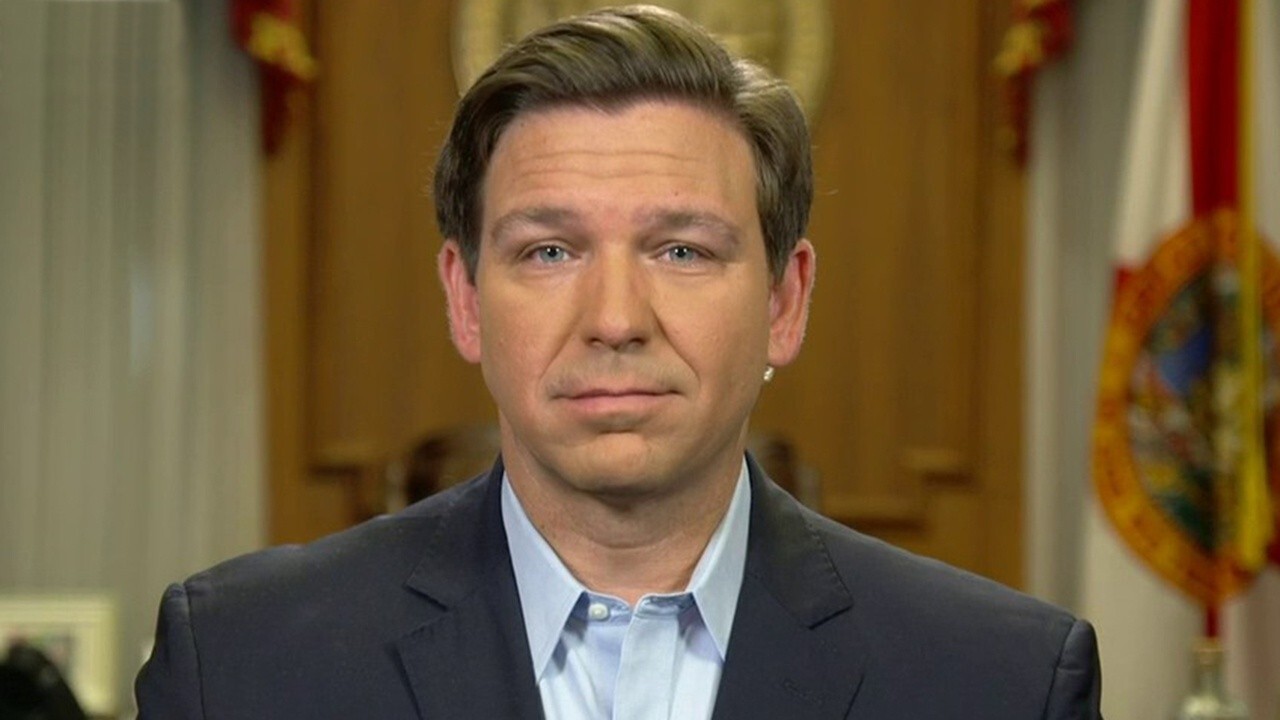 The Maryland order will remain in effect until the state of emergency in Maryland is over and the Virginia order will last until June 10 unless Northam rescinds it beforehand.

In Florida, Gov. Ron DeSantis said Monday that South Florida is the state's epicenter of the virus outbreak, with 60 percent of the state's cases in that region.

The governor issued a safer at home executive order through mid-April which includes Miami-Dade, Broward, Monroe and Palm Beach counties, accoridng to WSVN.

In the western part of the country, California officials on Monday put out a call for medical volunteers as coronavirus hospitalizations doubled over the last four days and the number of patients in intensive care tripled.

“California’s health care workers are the heroes of this moment, serving on the front lines in the fight against this disease," Gov. Gavin Newsom said in a statement. "To treat the rising number of patients with COVID-19, our state needs more workers in the health care field to join the fight."

As public officials have put out a call for more medical workers, new spikes in COVID-19 have been reported.

At least 11 people have died at a nursing home in Massachusetts, including five who tested positive for coronavirus while another five still have test results pending, Boston 25 News reported.

Gov. Charlie Baker called the deaths a “shuddering loss for us all.”

“As someone who has visited the Holyoke Soldiers’ Home on many occasions to catch up with staff and residents, I am heartbroken by today’s news,” the governor tweeted.

The Massachusetts Department of Veterans Services said 11 other residents at the home have tested positive for COVID-19, in addition to five staff members.

President Trump and the Department of Health and Human Services [HHS] announced a "historic milestone" on Monday that the U.S. has tested over 1 million people for the coronavirus, while also unveiling new rapid test kit for the contagion aimed at providing results within five minutes.

MyPillow CEO Mike Lindell speaks as President Donald Trump listens during a briefing about the coronavirus in the Rose Garden of the White House on Monday.  (AP Photo/Alex Brandon)

While Trump has praised the increase in testing, an audio recording of the call between the president and governors a day before the announcement obtained by the New York Times reveals that state leaders are still expressing concerns about adequate numbers of kits.

“Literally we are one day away, if we don’t get test kits from the C.D.C., that we wouldn’t be able to do testing in Montana,” Gov. Steve Bullock of Montana, a Democrat, said on the call of the recording obtained by the Times. 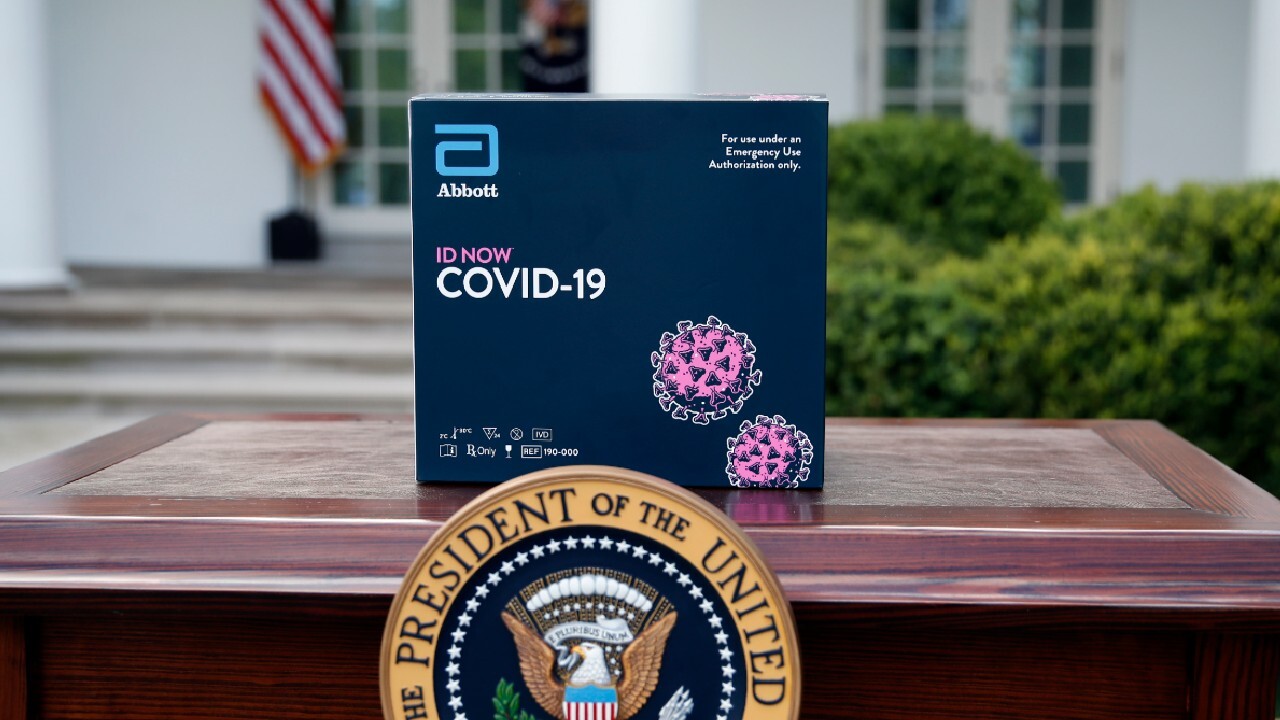 Trump was heard in the recording saying "I haven't heard about testing being a problem."

Washington Gov. Jay Inslee said it was "shocking to me" that the president didn't hear about the need for test kits.

"I can be assured that the White House knows very well about this desperate need for test kits," he told the Times.

Trump has attacked critics such as Inslee and Michigan Gov. Gretchen Whitmer over their criticism of the federal response to the pandemic.

"I want them to be appreciative," Trump said Friday about the nation's governors.

The president on Sunday also suggested, without evidence, that hospitals and hospital systems were “hoarding” ventilators and other medical supplies that were needed in states such as New York.