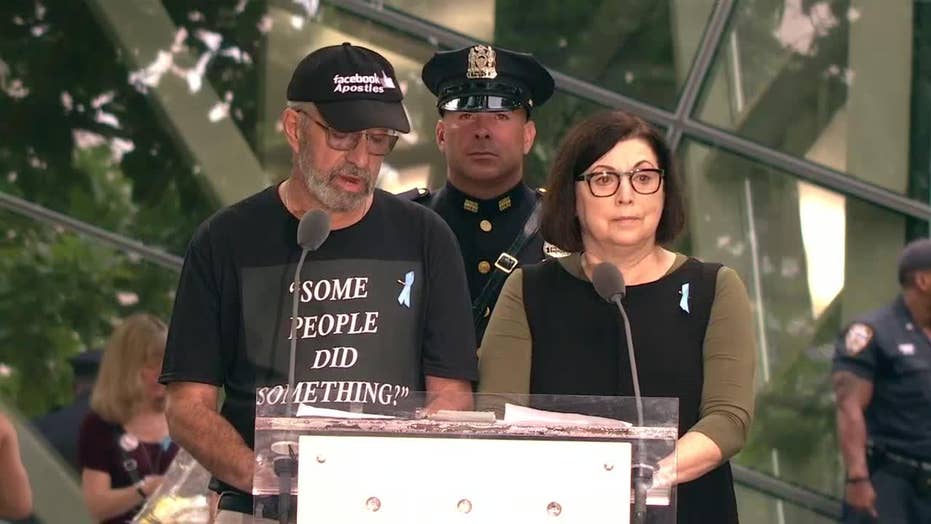 A man wearing a 'Some People Did Something' shirt addresses the Democrat 'Squad' member's 'confusion' about the 9/11 attacks.

Nicholas Haros Jr. wants Rep. Ilhan Omar and “the Squad” to know exactly who those "some people" are that perpetrated the "something" that took the life of his mom – and nearly 3,000 other people – 18 years ago.

The New Jersey resident, who lost his mother Frances in the 9/11 terror attacks, ripped the Minnesota congresswoman on Wednesday during a reading of victims’ names at Ground Zero after Omar's infamous remarks earlier in the year in which she described the most horrific attack to ever occur on the American homeland simply as “some people did something.”

“Today I am here to respond to you exactly who did what to whom,” said Haros Jr., who sported a shirt with Omar's words and was met with some applause from a crowd of families and relatives who had gathered for the ceremony. “Madam, objectively speaking, we know who and what was done. There is no uncertainty about that. Why your confusion?"

He continued: “On that day 19 Islamic terrorists, members of Al Qaeda, killed over 3,000 people and caused billions of dollars of economic damage. Is that clear?”

As Haros Jr. spoke, he was standing just steps away from the site of the former World Trade Center's south tower — where his 76-year-old mother, Frances, walked into work one pleasant Tuesday morning and never returned home.

“But as to whom? I was attacked. Your relatives and friends were attacked,” Haros Jr. said, looking out to the crowd. “Our constitutional freedoms were attacked and our nation’s founding on Judeo-Christian principles was attacked."

He added: “That’s what some people did,” Haros Jr. concluded. “Got that now? We are here today congresswoman to tell you and the Squad just who did what to whom. Show respect in honoring them, please.”

U.S. Army personnel stand amongst nearly 3,000 flags at sunrise on Sept. 11 in Tempe, Ariz. as they listen to the reading of the names of those killed on September 11, 2001. The flags are part of the annual Tempe Healing Field 9/11 memorial.(AP)

Omar tweeted about the attacks on Wednesday around the same time Haros Jr. was making his remarks, though it wasn't immediately clear if Omar's tweet was in response to his words.

"September 11th was an attack on all of us," she wrote. "We will never forget the thousands of Americans who lost their lives in the largest terror attack on U.S. soil. I will continue to fight to make sure we care for the first responders and families who lost loved ones. #NeverForget"

The "some people did something" comment from Omar that drew such widespread criticism was made at a March 23 fundraiser for the controversial Council on American-Islamic Relations.

“Here’s the truth: Far too long we have lived with the discomfort of being a second-class citizen and, frankly, I’m tired of it, and every single Muslim in this country should be tired of it,” she said. “CAIR was founded after 9/11 because they recognized that some people did something and that all of us were starting to lose access to our civil liberties."

Minnesota Democrat Ilhan Omar is facing backlash after her speech at a Muslim rights group’s event where she described the September 11, 2001 terror attacks as 'some people did something.'

Reps. Alexandria Ocasio-Cortez, Rashida Tlaib and Ayanna Pressley – the other three members of the Democrat quartet dubbed "The Squad" – sprang to Omar's defense, with Tlaib telling MSNBC that Omar’s words were taken out of context.

“They do that all the time, especially women of color, they take our words out of context because they’re afraid because we speak truth, we speak truth to power,” Tlaib said.

Haros Jr., in a 2001 interview with the Staten Island Advance, described his mom as a tireless receptionist at Keefe Bruyette & Woods, a financial firm that had office space on the 88th and 89th floors of the World Trade Center's south tower.

"The traders used to treat her like an office mother," he told the newspaper at the time, noting she chose to continue working that year instead of retiring. "Until she couldn't physically walk or crawl, she was going to work."

Nicholas Haros Jr. speaks out after his public plea during the World Trade Center memorial service.

Wednesday’s comments also were not the first time Haros Jr. has called out politicians at Ground Zero on the anniversary of the attacks.

“A representative of the House referred to our loss as just another incident’” he said last year, referring to remarks from House Speaker Nancy Pelosi.

“And last week, a Senator attacked a Supreme Court nominee and called him a racist for alleged comments after 9/11” he also had said, referring to Sen. Cory Booker, D-N.J.

“Stop. Stop, please stop using the bones and ashes of our loved ones as props in your political theater,” Haros Jr. declared. “Their lives, sacrifices and death are worth so much more.”