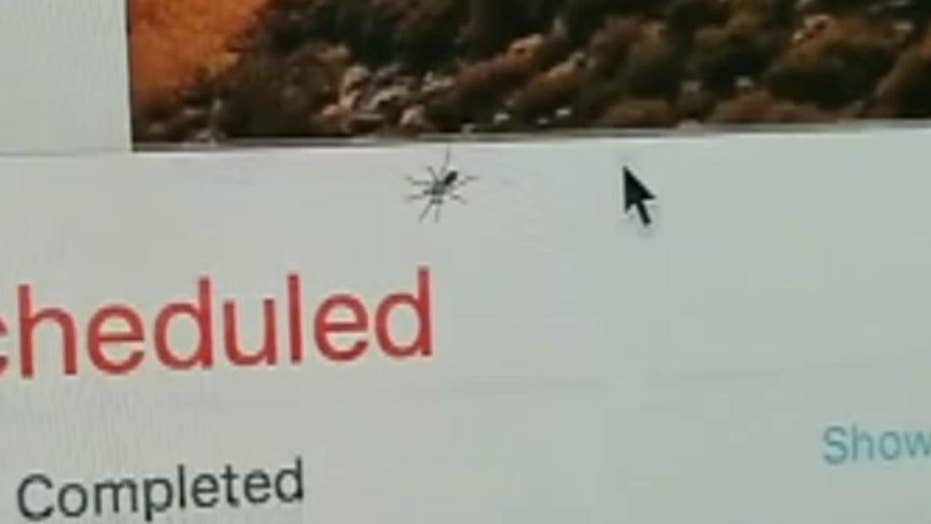 iMac user finds spider living inside of his computer screen

Raw footage shows small arachnid living in the screen of an iMac.

A baffled Apple iMac owner has discovered a spider living inside the screen of his computer – and has no idea how to get it out.

In a video posted to YouTube, Timothy Buchanan showed the eight-legged critter darting around his iMac screen, completely blocked off from the outside world.

"This little guy is crawling around behind the screen. He's clearly visible," Timothy explains in the video.

"At first, we thought it was a digital spider – like someone was playing a trick or something.

"But this thing is real. Anyone know how to get him out?"

The spider seems to be stuck between the display panel and the pane of screen glass that protects it.

That's entirely possible, of course. On a 2017 iMac, the gap between the display panel and the pane of glass is two millimeters. It's common for spiders to be much smaller than this, down to even half a millimeter in thickness.

There are a few give-aways in the video that suggest this is a real spider.

For a start, the spider appears on top of the mouse cursor, where normally a cursor icon would appear in front of everything that's open on-screen – fake spiders included.

The spider also seems to respond to movement, although very sporadically.

The real mystery is how the spider managed to get into the iMac.

In the video, Timothy guesses that the spider made its way through the rear vents.

Those vents help cool down the iMac when the processor is performing difficult tasks, and give access to all of the computer's innards.

It's likely that Apple didn't think about invading spiders when designing its flagship computer.

"It definitely seems like something that Apple should have foreseen as a possibility and taken preventative measures," said Timothy.

"I can't be the first (or last) person this has happened to."

Timothy is right, it turns out.

Online support forums reveal a number of complaints from users about this exact same issue.

Several users posting to the sites say a spider mysteriously appeared beneath the display, and have no way of getting rid of it.

"I wonder where this poor animal found its way inside the screen?"

Some users even uploaded photos of the computer "bug", asking for help from fellow gadget fans.

One iFixit user replied: "Can't you just suck it up with a vacuum cleaner", adding: "Try to place the vacuum cleaner at the bottom of your iMac."

A Mac-Forums user offered this advice: "Buy a can of compressed air at any store that sells it.

"Then, blow short blasts of air through the bottom vents directly under where the spider is settled down. I believe that will either dislodge it or cause it to exit."

"Just be careful not to blow too much at once. Short quick blasts are best."

Everyone seemed to agree that taking apart the display manually was the worst course of action, as iFixit's 'Danj' explained: "Sadly, opening the display glass sandwich to get to the bug is not easy!

"And you may in fact damage the display in the process and in addition getting it back together so it look good will be tough as well.

"It may end up being easier to just get a new display assembly, which is not cheap!

"That is why you want to get Apple to deal with this even if you need to pay the bench fee (they pay for the part) if that is as best deal as you can get."

We've asked Apple for comment and will update this story with any response.