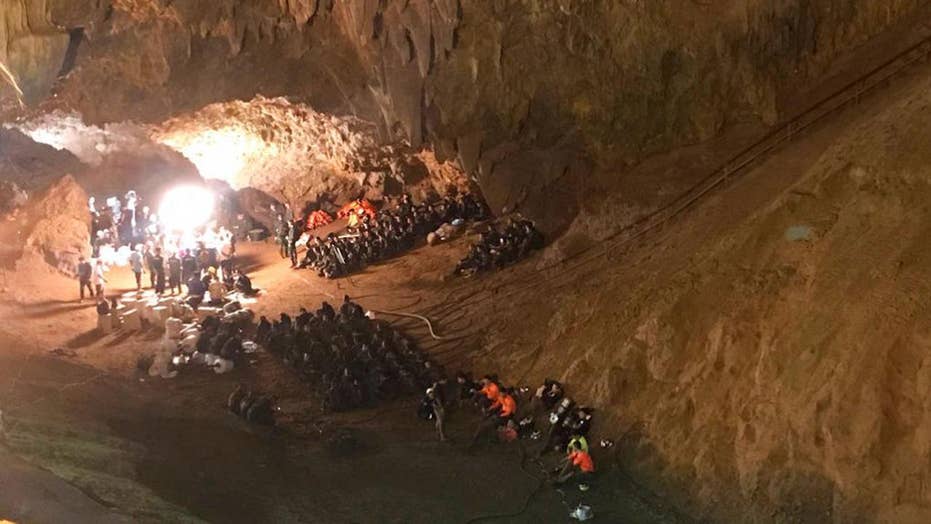 Hours after rescuers successfully located a missing youth soccer team and their coach deep in a Thai cave complex, experts are considering deploying electronic equipment to help bring them to safety.

The team was found by a pair of British volunteer divers in a partially flooded cave Monday, 10 days after they entered the Tham Luang complex in Northern Thailand. The group was trapped by flooding after entering the complex on June 23, sparking a huge search and rescue operation led by the Thai military. Experts from around the world, including the U.K., U.S., China and Australia have traveled to Thailand to join the rescue effort.

The British divers are part of a British Cave Rescue Council team that has been battling extremely dangerous conditions to reach the trapped soccer team. It is estimated that the boys and their coach are located about 2 kilometers (1.2 miles) into the cave complex and somewhere between 800 meters (2,624 feet) and 1 kilometer (0.6 miles) underground, according to the caving experts.

Now, rescuers are weighing the best options to get the team out of the cave complex, an extremely hazardous operation that could potentially involve diving through caves only wide enough for one person. None of the boys can swim, according to media reports.

“Back here in the U.K., there is an assessment of electronic equipment that may be suitable to pinpoint the underground location of the boys and coach with a greater degree of accuracy than the published surveys,” the Council said in a statement released on Monday. “The necessary equipment will be sent to Thailand if electronic experts agree on the feasibility that it will operate over such depths.”

The British experts say that, with the soccer team located in a relatively small space, any potential drilling attempt as a means of rescue would be very difficult.

A number of organizations in the U.K. have provided support to the British Cave Rescue Council team. The Derbyshire Cave Rescue Organisation, for example, has provided specialist radio equipment to the divers, with the help of Derbyshire Police.

Thai authorities say they are committed to "100 percent safety" when they consider how to extract the youth soccer team from the cave complex.

Chiang Rai Gov. Narongsak Osatanakorn said Tuesday morning that a Navy SEAL team will make the final call on the evacuation method. He said one method being considered is for the group to be coached to swim using special breathing masks.

He said other efforts will continue, such as draining water from the cave and exploring the mountainside for shafts and other entrances to the caverns below.

Experts have said the safest option could be to supply the 12 boys and their coach where they are and wait for the water levels to drop.