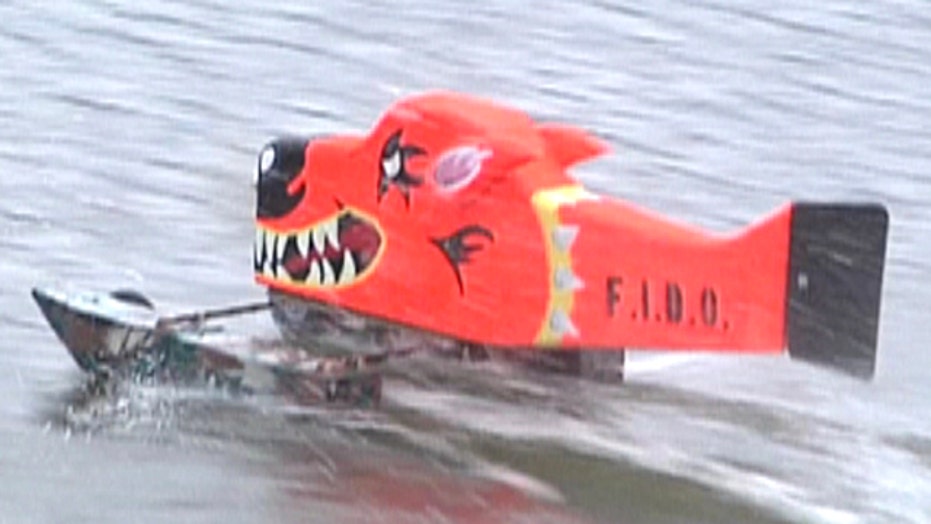 Surprising way to keep the geese away

Cedar Rapids, IA – Cedar Rapids Parks and Recreation department is taking a different approach to controlling the geese in their parks.

Geese droppings litter the grassy areas and create a minefield for anyone walking on the sidewalks.

After numerous attempts trying to get rid of the geese using Border Collies and even sending out employees to chase the birds, they knew they had to come up with a better idea.

Gibbins reached out to a local remote control aircraft club called the Cedar Rapids Quiet Flyers. Over the past fall and winter the Quiet Flyers and the parks system designed a bird chasing aircraft they named the Fowl Intercept and Dispersal Officer, or FIDO, for short.

FIDO is bright-orange dog-looking device. It has bared teeth painted by a local artist and is very noisy in order to scare geese.

Park employees use a remote control to steer FIDO and it's fairly simple to operate. FIDO zig-zags across the grass and water near the birds and the geese take off.

"This really is more fun than we thought it would be. It started not that we could run remote-controlled toys, but so we could actually solve the problem," said Gibbins.

The Quiet Flyers use flexible and durable foam for the FIDO design so it won't break easily.

"They don't have to worry about destroying their airplane if they happen to land hard or have a minor crash," said Edwards.

Edwards said they also built FIDO with cost in mind and so it could run on a number of terrains. It's a cheaper alternative than other models you can buy online.

"Commercial models, from what we have seen, range between $3000 and $4000 for one unit, and we were able to build these in-house for about $600," said Gibbins.  And because the parks department built FIDO in-house, they have spare parts if anything breaks.

The plan is to scare the geese away with FIDO for the next month or two, or until they learn the parks aren't a good place to hang out. Then they will make FIDO replicas that sit out all the time, much like a scarecrow.

Gibbins makes the point that FIDO doesn't harm the birds at all. He says the parks system is fine with some geese, but the numbers got out of control and they had to figure out a solution. FIDO just teaches the geese the parks aren't a good place to gather and they hope will make the parks a cleaner and safer place for visitors.