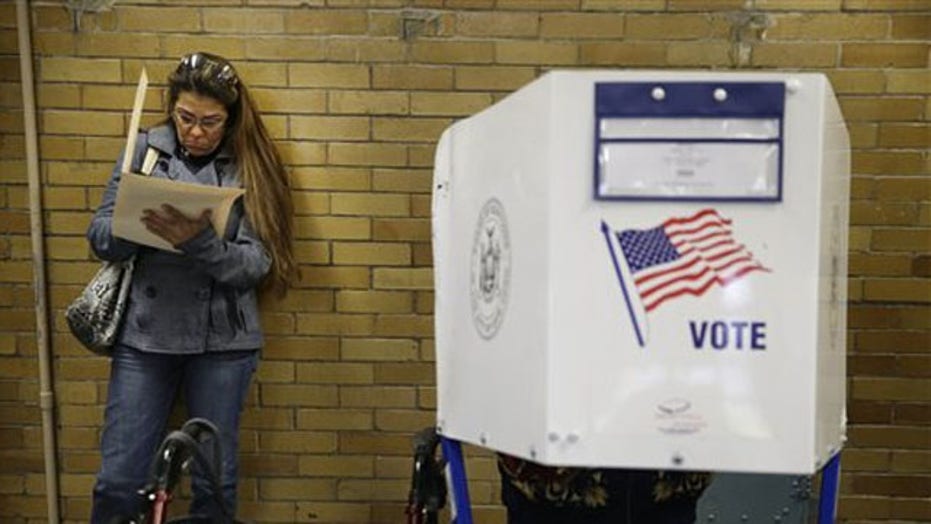 Bungling at the ballot box by NYC poll workers

WASHINGTON — Voters around the country encountered malfunctioning machines, website crashes and delayed polling place openings, but the problems for the most part appeared sporadic rather than systemic and there was no immediate indication that they factored in the outcome of an election.

Beyond routine mechanical problems, the midterm elections Tuesday also represented for some states the first major tests of new voter identification laws that opponents say disenfranchise minorities and the poor.

In Texas, where the U.S. Supreme Court last month let stand a strict photo ID law, there were reports of "voter confusion about how and whether their votes would be counted," according to Election Protection, a voter advocacy group. The law had not previously been used in congressional elections or a high-profile race for governor.

Georgia officials scrambled to fix a page on the Secretary of State's website that was supposed to help voters find their polling locations, but instead directed many users to an error message. The problem created "unnecessary confusion," especially in a state roiled by a legal dispute about voter registration, said Rashad Robinson, executive director of ColorofChange.org, a civil rights organization.

Advocates for the New Georgia Project, a voter registration drive targeting minority voters in a state historically led by whites, said 40,000 new registrations were still not on the voting rolls as of Tuesday. Meanwhile, the DeKalb County elections office was crowded with people whose names weren't on the list of eligible voters even though they've been registered for past elections. Some were told they were ineligible because they didn't update their voter registrations to match their driver's license.

After several polling places in Hartford, Connecticut, failed to open on time, a state judge ordered two to stay open a half-hour late. Democratic Gov. Dannel Malloy argued that some people were deprived of their right to vote. Malloy and Republican challenger Tom Foley were locked in a race that was too close to call early Wednesday morning.

There were reports of problems in Florida, where the gubernatorial campaign of Democrat Charlie Crist sought unsuccessfully to extend voting in Broward County by two hours. His campaign alleged that malfunctions with some addresses caused voters to be bounced between precincts and that they ultimately weren't registered by the system.

The Florida secretary of state said there were isolated voting problems but nothing systemic. Crist lost to Republican incumbent Rick Scott.

Elections officials in Virginia, where a closely contested Senate race dragged into Wednesday morning, acknowledged problems with more than 30 electronic voting machines in the area of Virginia Beach and Newport News. The elections department said the broken machines were taken out of service and there were enough working machines to prevent any voting delays.

In New Mexico, a state judge ordered Sandoval County to issue provisional ballots after lawyers for Gov. Susana Martinez's campaign complained voters were being turned away due to software problems.