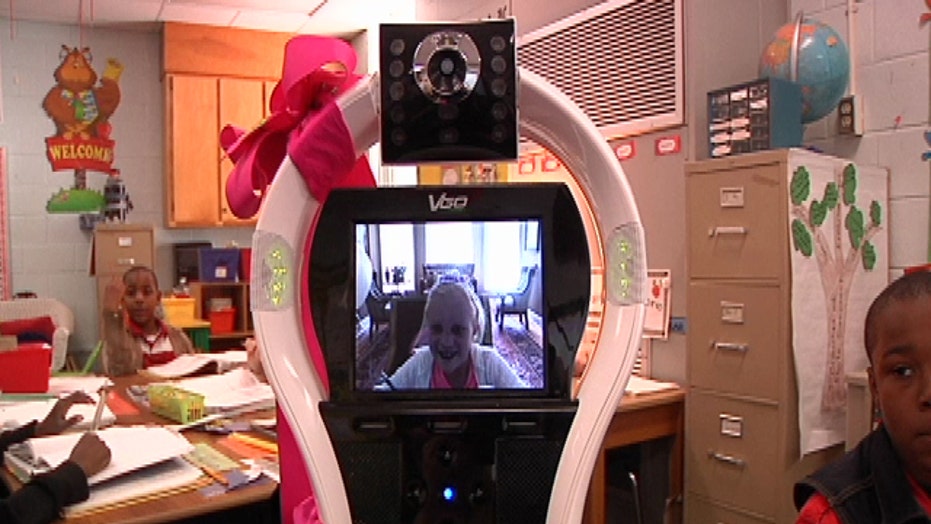 Robot goes to school in place of homebound students

Lexie Kinder uses her VGo robot to go to school from home because of her cardiac disease, allowing her to see the teacher and the classroom

SUMTER, SC – Lexie Kinder has a desk in her third grade classroom at Alice Drive Elementary School in Sumter, South Carolina. But you won’t find her there – you’ll find her at home at her desk. You'll find a robot at school in her place.

Kinder uses what’s a called a VGo robot to attend school. VGo embodies a homebound or hospital-bound student in a distant location. A remote student can see, hear, talk, interact and move around as if they were in the school.

Kinder goes to school from home because of a cardiac pulmonary illness, but wants more than anything to be a normal student.

“It’s a chance for her to be involved in school more when she couldn’t be here,” Kinder.s teacher, Ivy Smith, told FoxNews.com. And the students love seeing Lexie every day, even if it is just on a small screen.

We spoke to Kinder on her 9th birthday. Her VGo robot was decorated head to toe in pink and had on a special birthday sash. In Kinder’s music class, her classmates sang her happy birthday.

“I was pretty excited,” Kinder said.

“She would be here if she could,” Smith told FoxNews.com. “She wants to be just like any other third-grade student.”

Kinder is one of 30 students with special needs in 13 states using VGo. It has been on the market for a little over two years and is sold by VGo Communications.

Each robot costs about $6,000 and has an annual network and service agreement, much like a cellular phone. In Kinder’s case, her school's special needs department paid for the VGo, because the cost is the same or less than traditional homebound instruction.

“I think it's good,” Kinder said. “It helps me go to school and it helps me learn.”