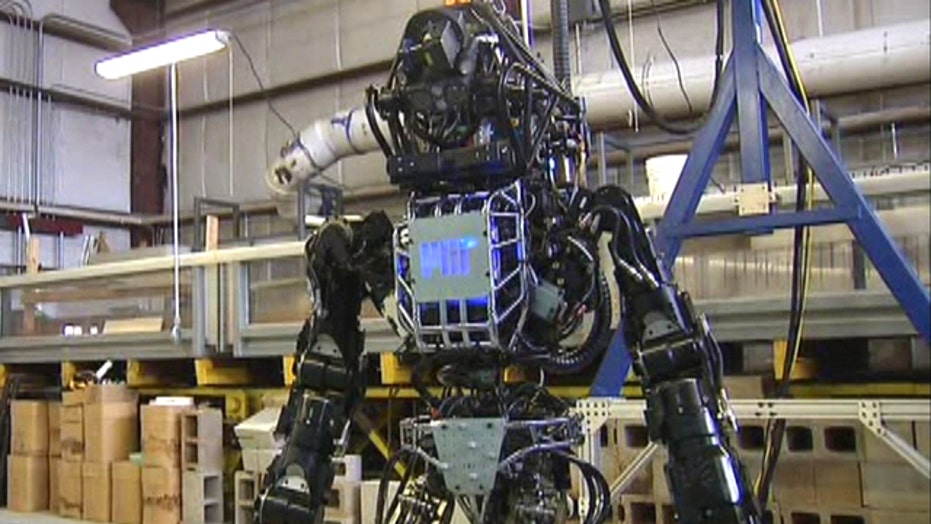 Robot rescue: first-responders of the future

From nuclear disasters, to natural catastrophes and blazing hot fires, robots that can stand-in for humans in dangerous places are under development.

"Because it's hydraulically actuated, it's very strong," said Pat Marion, a robotics software engineer at MIT. "So it can lift very heavy objects and it can move very quickly with its legs when it's walking."

Prof. Seth Teller of MIT's Computer Science and Artificial Intelligence Lab (CSAIL) says the aim is "to develop a robot that can walk into a dangerous place like Fukushima, which is inhospitable to human life, and actually do something useful there."

Already, with minimal guidance, Atlas can walk, balance and pick things up-- tasks that would be critical in debris clearing situations.

But what happens when the challenge is burning hot? At Virginia Tech, mechanical engineers are leading a team,

including researchers at UCLA and the University of Pennsylvania, to create a firefighting robot for the U.S. Navy,

one that will be protected with a resin shield to prevent heat and water damage.

The humanoid creation at Virginia Tech is part of the Shipboard Autonomous Firefighting Robot -- or (SAFFiR) program.

It can balance on unstable surfaces- like a ship at sea- navigate tight quarters and using clues, like smoke, locate a fire.

The robot will be tested later this year on the Navy's fire test ship, the ex-U.S.S. Shadwell which is moored in Alabama.

The ultimate goal- to keep people out of harm’s way.

"We're not only looking to use the technology for ships but for fires in buildings," said Lattimer. "Our big push is to not be sending people into burning buildings and structures but to send robots into these harsh conditions."

Teller believes many of the advancements only researchers are seeing in elite labs will soon be available to people in everyday life.

"The future of machines that are in our homes, in our work spaces, doing at least simple tasks for us is not that far away," said Teller. "It's no more than a couple of decades away. Now I know you've been hearing that for 50 years... this time we think it's really fairly close."