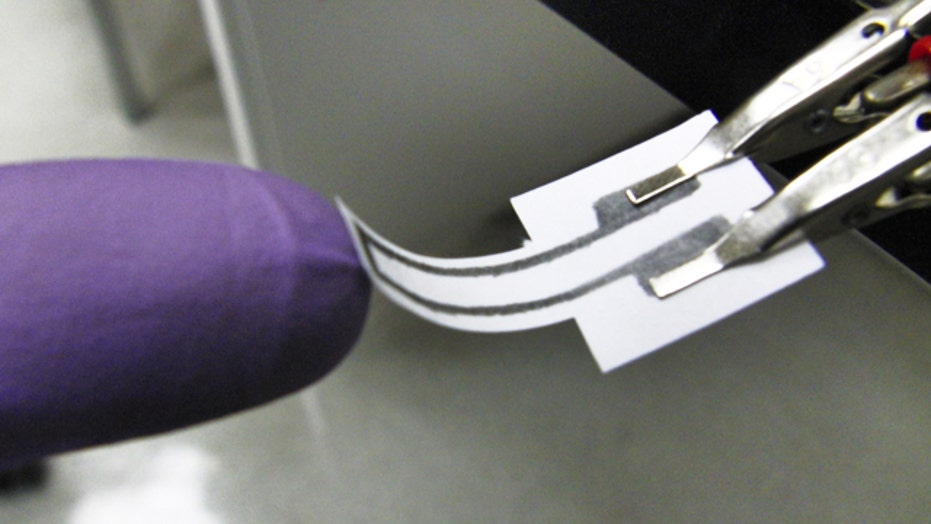 Can the stuff on your desk detect a chemical attack?

New research says yes. Even the average American schoolkid has at hand exactly what’s needed to go MacGyver: a pencil, a piece of paper and a bit of artistic flair.

And who discovered this smart, low-tech approach to the challenge of detecting chemical weapons? Three college students.

Drawing chemical detectors
The average pencil on Joe Student’s desk isn’t made of lead, but graphite, mixed with a clay binder and encased in wood. Basically, graphite is a form of carbon, as are diamonds.

When discussing the conductive properties of graphene -- a layer of graphite just a single atom thick -- in one of their classes in the fall of 2011, three students at Northwestern University’s McCormick School of Engineering made a key discovery.

“When you draw a line on a piece of paper, the graphite may shed numerous graphene sheets” or layers, said Jiaxing Huang, associate professor of materials science and engineering.

“A student asked, ‘Can we use that graphene for something?’ That started an exploration of what pencil traces can do.” And ultimately to the creation of a chemical weapons detector.

This team began by measuring the conductivity of a pencil trace on paper, using it to create a very simple electrode. They discovered that if they curled the paper in one direction, it increased the trace’s conductivity; bending compressed the conductive graphene particles, they found.

When they curled the paper in the opposite direction, it decreased the conductivity by loosening the graphene network.

But not for all pencils. Instead of the clay binder mixed into a traditional pencil, some flexible pencils use graphite mixed with a polymer binder. The students turned to studying their traces, and once again found that by bending a piece of paper with a pencil drawing, they could increase and decrease the conductivity.

Not only was it conductive, their pencil drawings were also affected by exposure to toxic industrial solvents and other volatile chemical vapors. They had drawn a “chemiresistor” it turned out, a chemical sensor that can detect the presence of hazardous gases.

Homemade detectors
Chemiresistors change resistance when they are exposed to a gas or vapor. They are low-cost devices without moving parts that can be easily used in a sensor array.

And they can be used to build electronic noses, which help detect toxic chemical vapors.

Many places, for example the Sandia National Laboratory, work on developing chemiresistors.

Because of the small size, simple design and low power consumption, chemiresistors make sense for devices that can be worn by first responders to detect exposure to toxic industrial chemicals or chemical warfare agents.

The devices can also be used at factories and other facilities to both protect them and assess contamination.

Chemiresistors also make a lot of sense to monitor municipal water supplies. Just this month, a toxic chemical spill in West Virginia put as many as 300,000 people in harm’s way.

The students’ research could lead to a new type of chemiresistor, a danger sniffer from a far more inexpensive material than those currently in use, such as carbon nanotubes or metal nanoparticles.