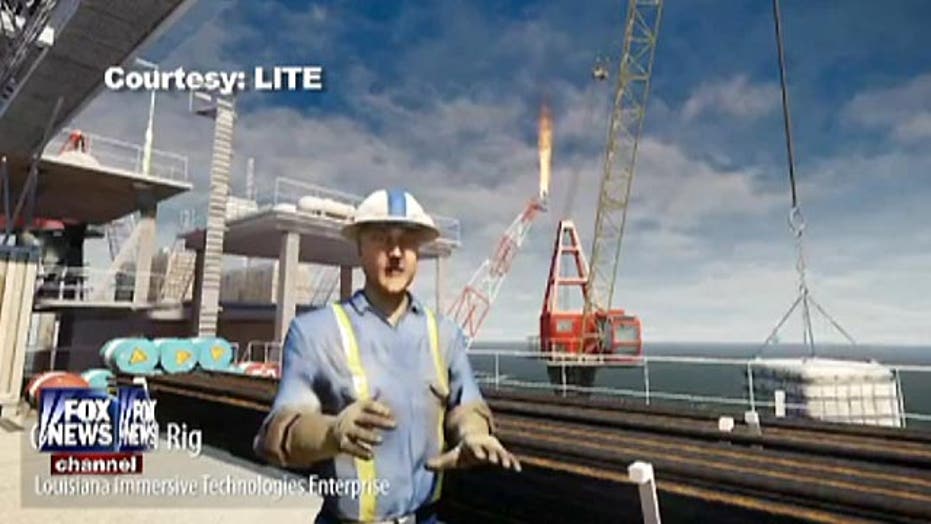 Oil industry betting on virtual worlds to save lives

Oil companies are starting to train their oil rig workers in a virtual world -- literally.

Instead of employees learning from PowerPoint presentations during training class, some companies are beginning to roll out training programs where employees get to play custom-made video games teaching them safety, rules, and procedures out on an oil rig.

The training could ultimately save their lives because working on an oil rig can be a dangerous job.

The 2013 fatality rate in the oil and gas extraction industry was 3.2 deaths per 100,000 workers according to the Bureau of Labor Statistics. That is about eight times higher than the average fatality rate in all other U.S. industries.

“When you have workers who have never been on an offshore platform, they don’t know what to expect,” said Skyra Rideaux, spokesperson for Louisiana Immersive Technologies Enterprise (LITE) -- a company that creates virtual reality gaming software. “We create a virtual environment for them where they actually get to see what a rig looks like and what they’ll be doing,” she added.

There are dangers when working with heavy machinery and virtual reality training can help, according to the company’s communication director Josh Grodin.

Training employees using video games and virtual reality experiences is a more efficient way of learning because it creates a more “hands on” approach that sparks engagement in the classroom, according to Jacke West, training director at Frank’s International.

LITE released a couple of virtual training exercises for Frank’s International just a few weeks ago -- taking about six months to create the software. But the next video game exercises currently under production for Frank’s will not take as long, and should be completed in about a year or so, according to Rideaux.

“We learn by experiencing,” said Erin Marietta, LITE’s chief operating officer. “Everyone learns in an environment where you can touch and feel. And that’s what virtual reality does. It’s getting cheaper and a lot easier to produce,” she added.

West said the old-school ways of using PowerPoint presentations in the classroom are a thing of the past.

“Virtual reality training is the future,” he explained. “And our budget has been approved to expand the training in 2015.”

Part of the expansion West refers to will give oil rig trainees at his company the opportunity to use the Oculus Rift -- a 3D virtual reality device created by Oculus VR, which was bought by Facebook for $2 billion earlier this year.

Oculus Rift is a head-mounted display that creates a fully immersive video gaming experience. Right now the device is only available as a development kit for software creators, but it’s expected to become commercially available in April 2015.