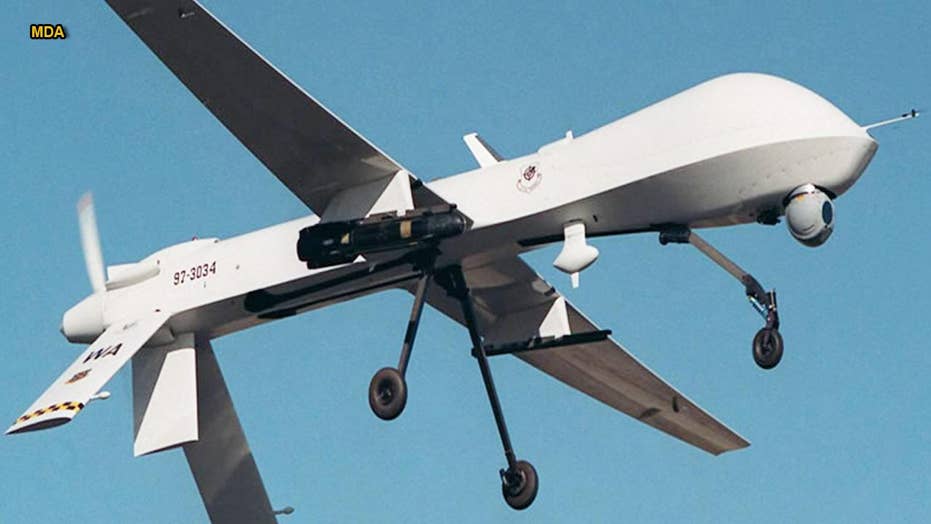 Laser-equipped drones will take out missile threats to the US

Defense specialist Allison Barrie has the inside scoop on new drones that will protect the US from ICBMs thanks to powerful laser weapons that could blast them out of the sky.

If an enemy tries to launch ICBMs (Intercontinental Ballistic Missiles) to destroy American cities and Smalltown, USA … then new drones with powerful laser weapons could blast them out of the sky.

Rather than play defense, launching interceptors from home soil and warships while the ICBMs head towards impact, these incredible drones could pre-emptively patrol enemy skies for more than a day without ever having to land or refuel.

Once a missile launch is detected, armed with its revolutionary laser, the drone could blast deadly enemy missiles as they are literally leaving the launch pad.

Imagine the impact on enemy morale … the drone would attack from heights unable to be seen with the naked eye – about twice as high as commercial aircraft fly- and unlike in movies, the beams are invisible.

The drone’s laser weapon would hit the missile and launch site with jaw-dropping fiery might. For enemy forces, it would seem as if things suddenly began destroying themselves and disintegrating.

It would be terrifying for enemy forces to have lasers suddenly strike and smite without warning from above. Sends quite a clear signal to adversaries not to even consider attacking the United States with a missile.

In the face of the rising ICBM threat, these new drones, armed with ground-breaking laser weapons, could provide an important way to enhance the protection of every American, every small town and big city.

Lockheed Martin, General Atomics, and Boeing have all been working on paving the way for the laser-armed drones that would seem the stuff of science fiction to become a reality.

This week, the Missile Defense Agency (MDA) announced additional investment for all three companies to further advance their projects.

In dire need of a more fitting name for a project that could deliver technology worthy of the Avengers, this project that is paving the way for real life laser-blasting drones, it is currently called … the Low Power Laser Demonstrator (LPLD).

The threat to Everytown, USA

Are we ready to shield the entire country from these deadly missiles?

The Missile Defense Agency is responsible for defending against ballistic missile threats. The Ballistic Missile Defense system is a current shield with promising tests thus far. When an ICBM is detected, an interceptor would be launched from a ground or warship-based asset.

Enemies with advanced ICBMs can launch from thousands and thousands of miles away – from oceans away – to hit U.S. soil with maximum destruction.

Not all ICBMs, and the multiple warheads they can carry, are the same. Some ICBMs could destroy entire American cities. Some could deliver nuclear bombs to farming country.

Other ICBMs could detonate EMPs (electromagnetic pulses) knocking out connections to the modern world. Armed with deadly biological weapons, other missiles could unleash an invisible threat that invades state after state, infecting Americans with lethal sicknesses, wiping out populations as it spreads. If the ICBM carries chemical weapons, it could inflict horrific side effects and immense suffering.

So ICBMs are a serious threat with serious consequences.

Concerns over North Korea, China, Iran and Russia lobbing ICBMs at the homeland may have faded from the headlines, but the threat persists and grows. Some programs like North Korea may still be aspirational, but others such as Russia already have ICBMs that can reach the U.S. and devastating warheads readily available.

This requires high-altitude long endurance (HALE) with specific capabilities. MDA aims to create high altitude drones that can fly at least 63,000 feet high. They will be able to stay in the area ready to strike with laser blasts for more than 36 hours without landing or refueling.

A MILITARY HELICOPTER DRONE THAT CAN FIGHT WILDFIRES

These drones will have a cruising speed of Mach .46 while patrolling and can travel at least 1,900 miles to a target.

PODCAST: HEAR THIS CHILLING FIRSTHAND ACCOUNT OF THE SAN BERNADINO TERRORIST ATTACK FROM THE BRAVE SWAT ON SITE PERSPECTIVE

The aim here is for this laser weapon to be at least 140 kilowatts, but hopefully exceed 280 kw. The laser weapon will be able to blast for at least 30 minutes without any impact on the drone’s flight performance.

This is not a small feat. The many gigantic challenges involve developing solid-state lasers strong enough to destroy enemy ballistic missiles while the drone is flying at extremely high altitudes, aiming the laser from those heights and keeping it steady on the target.

The Ballistic Missile Defense system is vital and doing remarkable things. But a layered defense will provide maximum protection.

This laser-armed drone will have the unique ability to destroy enemy ballistic missiles in boost phase.

Realistically, an ICBM attack on the United States or our military abroad will not be the lone missile with one lone warhead as often mistakenly portrayed in media … instead, it will be adversaries with deep missile arsenals who will go all out unloading at us.

They know the more they launch, the more the U.S. must intercept every single one to ensure complete protection.

When interception occurs closer to home, after a single ICBM releases multiple warheads, then the number of threats that must be successfully intercepted multiplies exponentially.  Enemies may also launch decoys to draw interceptors and try to overwhelm interception capabilities.

Each missile can deliver a number of warheads. Each warhead may have a different target location with its own specific weapon (ranging from nuclear to biological).

A drone that can fire at the ICBM during the first-stage rocket, aka booster phase, has a number of advantages.

One of the most important is that ICBMs are at their most vulnerable while in their boost phase which makes it an ideal time to strike. Rather than have to destroy each warhead after they depart the ICBM, boost phase means just one shot can destroy multiple warheads.

When will it hit the skies?