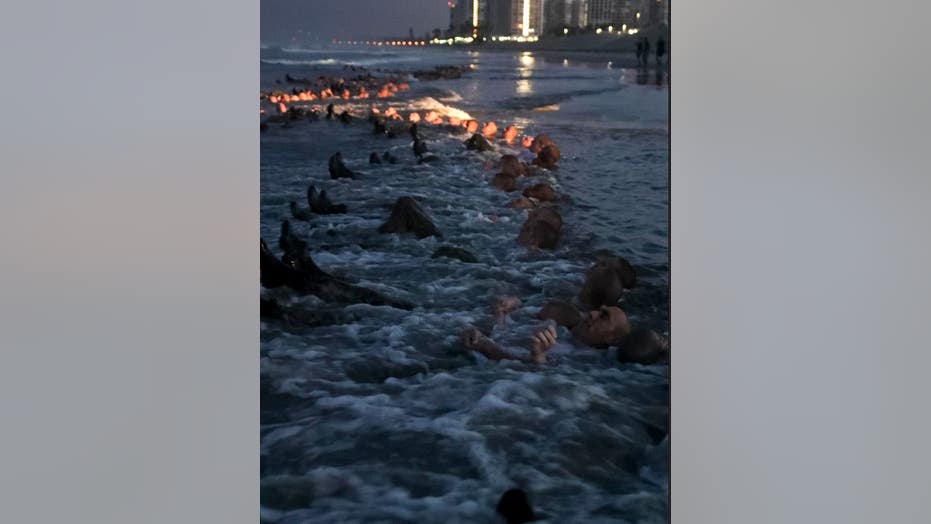 Following a brief pause in training selection due to risks associated with COVID 19 risks, some selection and assessment training have now resumed, according to a report from the Naval Special Warfare Center.

Runs, swims, combat maneuvers, rough-sea integration and rigorous combat training have all resumed after the Navy paused three of its 12 cohorts March 16, the Navy report states. The final paused phase will restart May 11.

“We took a conservative approach to properly assess our student population and establish protocols in order to minimize risk to them during training,” said Capt. Bart Randall, commodore, NSW Center, adding the decision to restart training is based on mitigation efforts put in place that follow CDC recommendations and DOD medical professional guidance.

The Navy report also specifies that Instructors will wear face masks and gloves, when practical, and make sure students perform daily COVID-19 screenings.

“Classes will maximize bubble-to-bubble travel to limit personal contact outside their cohort and remain on base until after the completion of BUD/S (Basic Underwater Demolition SEAL School) Hell Week and its SWCC (Special Warfare Combatant-craft Crewman) counterpart, The Tour,” the report says.

As many know, the selection process is both rigorous and highly competitive. Also, the selection process continues to take on added urgency, given the high demand for special operations around the globe caused by fast-changing threat circumstances; special operations have maintained an extremely high optempo in recent years, due to combatant commander requests for counterterrorism, allied force training, rogue-nation deterrence missions and great-power war preparations.

This mission scope, Special Operations leaders and trainers say, is particularly important in today’s emerging threat environment which has inspired SEAL forces to slightly pivot toward additional preparations for roles in major-power conflict. While counterinsurgency, counterterrorism and the training of allied indigenous forces are all still very prominently featured as needed SEAL missions, units are also now more intensely preparing for the kinds of missions needed for great power war -- such as intelligence gathering related to large nation forces, high risk operations behind enemy lines and the training of allies to operate major war platforms such as armored vehicles, helicopters and even fighter planes.

Interestingly, candidates are expected to meet certain key parameters before being eligible to compete for a spot. The minimum training-physical standards needed for SEAL candidates to apply include a need to - swim 500-yards in less than 12:30, do 50 push-ups, 50 curl-ups and 10 pull ups and run 1.5 miles in less than 10:30.

“NSW expects its operators to be flexible in all phases of mission planning and execution, and we practice what we teach at our schoolhouse,” said Randall. “NSW Center will continue to safely train and deliver SEALS and SWCC to the Force capable of performing at the high standards demanded of NSW operators.”