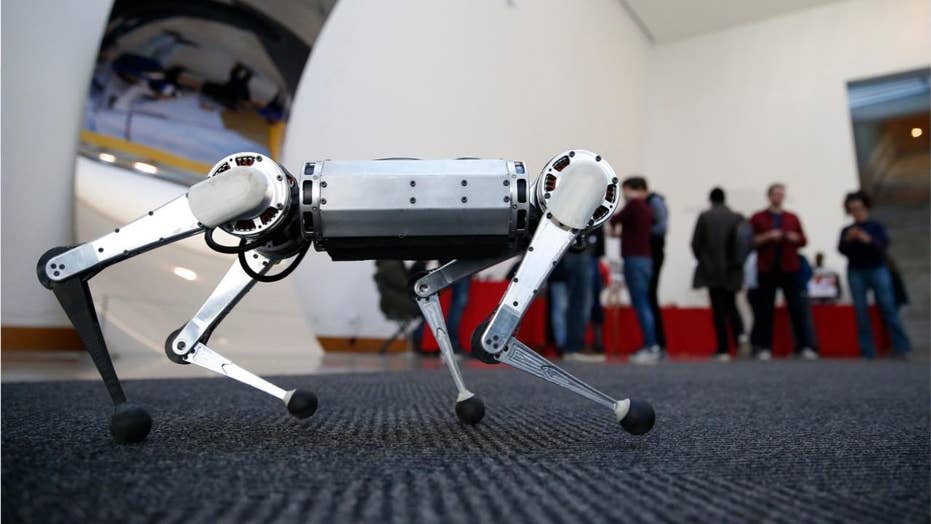 The Massachusetts Institute of Technology (MIT) recently unveiled a new video of its Mini Cheetah robot, demonstrating that the four-legged android can now dribble a soccer ball, run and jump.

In March, the Mini Cheetah robots were seen doing backflips.

“Eventually, I’m hoping we could have a robotic dog race through an obstacle course, where each team controls a mini cheetah with different algorithms, and we can see which strategy is more effective,” Sangbae Kim, Director of Biomimetic Robotics Lab at MIT, said at the time.

Cheetah's lead developer, Benjamin Katz, said the robots are modular, noting that if a limb or motor were to break, they could be replaced with a new one.

“You could put these parts together, almost like Legos,” Katz said in March. “A big part of why we built this robot is that it makes it so easy to experiment and just try crazy things, because the robot is super robust and doesn’t break easily, and if it does break, it’s easy and not very expensive to fix.”

The Mini Cheetahs each weigh approximately 20 pounds, are powered by 12 separate motors and are considered "virtually indestructible." At that size, they're significantly smaller than the 90-pound Cheetah 3, which is able to perform tasks such as jumping on tables, climbing stairs and traversing difficult terrain.

The university describes the smaller android as "inexpensive and lightweight," noting it too is capable of such tasks as running, walking, jumping and turning.

Unlike some other quadruped robots, such as Boston Dynamics' Spot, the Mini Cheetah likely won't be available for sale. But if it was, you can imagine Chelsea, Manchester United and maybe even Everton spending some money on a transfer fee.