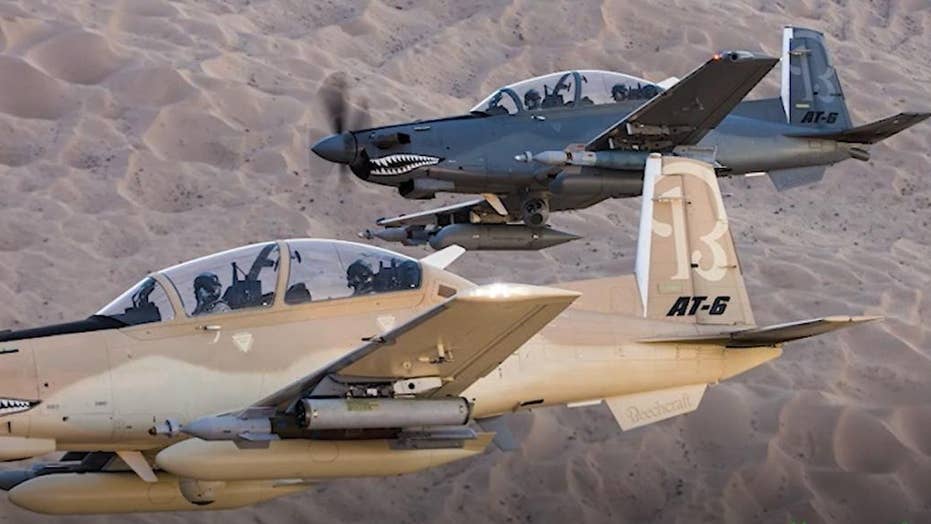 AT-6 Wolverine: Inside look at fierce weapons-armed plane

Defense Specialist Allison Barrie shares an insider's look into the AT-6 Wolverine and reveals how this retro-looking hybrid can closely support U.S. troops on the ground by providing a wide variety of firepower from the air

During World War II, Beechcraft supported the war effort by making more than 7,400 airplanes deep in the heartland of America at its factory in Kansas. About 90 percent of the U.S. Army Air Corps bombardiers and navigators were trained on derivatives of the Beechcraft Model 18 - the AT-7 and AT-11 aircraft.

Now the company's latest effort, the AT-6 Wolverine, is poised to join the fight against current enemies of the United States.

Between the paint job and frame, the new jet definitely evokes the style of the iconic fighters from the WWII era, but don’t let those looks fool you — this aircraft is packed with state-of-the-art technology.

MEET THE COMBAT CROP DUSTER, ARMED AND ARMORED TO JOIN THE FIGHT

Similar to its animal namesake, the AT-6 Wolverine may not large in stature, but it brings a whole lot of fight and firepower to take on threats to ground forces.

The AT-6 Wolverine is armed to the teeth with a wide range of weapons. Weapon configurations can be tailored to meet the mission – so users are not restricted to a specific set of weapons.

Whether it is taking out a terrorist compound or a single terrorist sniper putting troops at risk – the Wolverine can bring the right weapon for the job.

It is also compatible with Joint Terminal Attack Controller (JTAC) systems for both the U.S. and NATO, which is important to integrate into providing excellent close air support for teams on the ground.

HOW SHARKS CAN HELP THE US MILITARY IN THE FUTURE

Lockheed Martin’s A-10C Combat Mission System that further enables the pilots to command the aircraft is included, as are a moving map, sensor displays and targeting system all available for pilots to use quickly.

For armed reconnaissance, gathering intelligence and conducting surveillance, there’s an advanced Wescam MX-15Di multi-sensor suite. This equips the aircraft with tools that can deliver critical data like color and IR cameras, laser rangefinder sensor pod as well as laser illuminator and laser designator.

In a big change from WWII planes, U.S. Air Force fighter pilots are both male and female. The Wolverine takes that into consideration and incorporates a Martin Baker Mk-16 ejection seat that suits such a wide range of pilots body sizes, accounting for approximately 95 percent of the current pilot population.

Under consideration by the Air Force

It is currently undergoing batteries of testing out at Holloman Air Force Base in New Mexico.

The Wolverine has lots of potential to be used by the military to support troops on the ground by rapidly flying to their assistance and delivering serious firepower from the air.

Excellent, readily available close air support is an essential component to helping keep US ground forces in war zones as safe as possible.

Compared to other turboprop light attack aircraft, the AT-6 Wolverine has one of the highest power to weight ratios thanks to its special engine.

It can reach speeds of about 500 miles per hour, making it one of the speediest light attack turboprops. When ground teams need support, speed is important because a minute can be the difference between life and death.