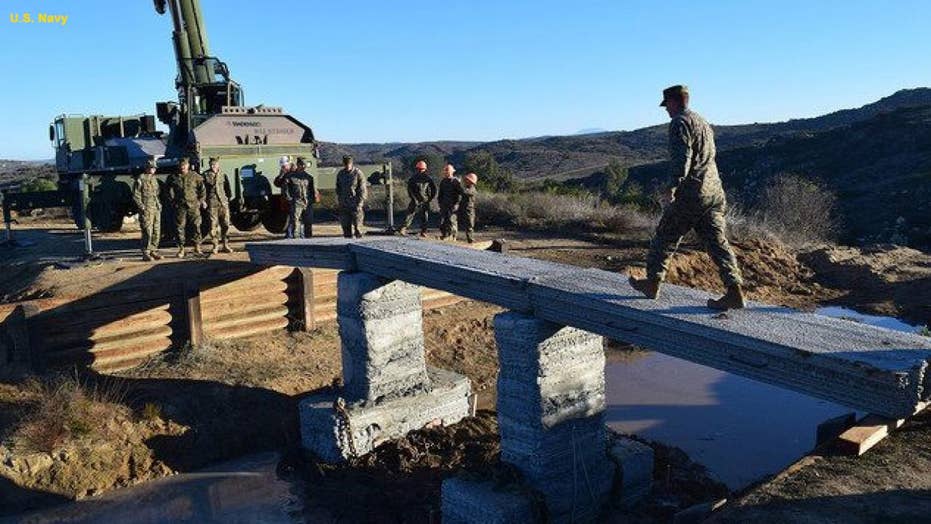 For the first time in the U.S. or the Western hemisphere, Marines at Camp Pendleton, California 3D-printed a concrete bridge.

The feat, which took place in December, is the first time in the U.S. or the Western hemisphere that a bridge has been 3D-printed on site, as opposed to in a factory, according to the Marine Corps.

A Marines spokeswoman told Fox News that it took 14 hours of printing to create the pieces of the bridge. "However, they didn't run the printer for 14 continuous hours," she explained. "So it took about 3 days, working for 8 hours per day, and going home at night."

After completing the printing, the Corps let the concrete pieces of the bridge "cure," or "settle" for 36 hours before assembling the bridge. "It took less than 4 hours to emplace," the spokeswoman said.

The footbridge was printed as part of the Corps’ annual Steel Knight exercise. Marines were trained to use the Automated Construction of Expeditionary Structures (ACES) 3D-printer.

Members of the 1st Marine Logistics Group worked on the project with the Marine Corps System Command Advanced Manufacturing Operations Cell and the Army Corps of Engineers.

“One of our goals was for Marines to learn to operate the equipment on their own, which they did and it was great,” said Capt. Matthew Friedell, AMOC project officer, in a statement. “Another goal is that each time we do one of these tests, we use [fewer] people. Ultimately, we want one person standing there who hits ‘print,’ and the machine does all the work. We’re getting there.”

Marines were also helped in the construction effort by sailors from Naval Mobile Construction Battalion 5 at Port Hueneme, Calif. The Seabees brought a volumetric mixer to the Camp Pendleton site, saving about six Marines from mixing large amounts of concrete.

The bridge is just the latest example of 3D-printing innovation by the Marine Corps. Last year, for example, Marines used a specialized 3D concrete printer to print a 500-square-foot barracks room in just 40 hours.

The feat is the first time in the U.S. or the Western hemisphere that a bridge has been 3D-printed on site, as opposed to in a factory, (U.S. Marine Corps photo by Lance Cpl. Betzabeth Y. Galvan)

The innovative project created the world’s first continuous 3D-printed concrete barracks, according to the Corps. Normally, it takes 10 Marines five days to construct a barracks hut out of wood.

Friedell noted that the barracks hut project was more difficult because Marines had to mix the concrete themselves. “For [the bridge project], we used the volumetric mixer, which did all the gravel, mixed all the concrete and got it ready to pump without anyone doing the really hard work,” he explained, in the statement.

The officer believes that, in addition to building bridges and barracks, the technology demonstrated at Camp Pendleton could also help support humanitarian efforts.