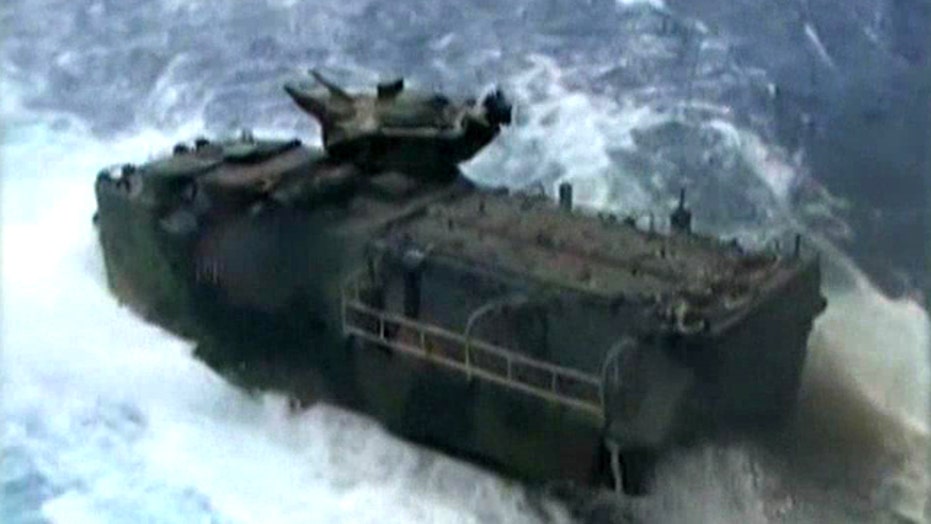 Allison Barrie on the competition to design the next Fast, Adaptable, Next-Generation Ground Vehicle, or F.A.N.G.

Three Americans from three different states teamed together to win one million dollars this week in the competition to design the first stage of a next-gen assault vehicle for the Marines.

Each of the three FANG challenges invites competitors from across the country to design increasingly complex vehicle subsystems and there is no fee to participate.

FANG’s requirements reflect those of the Marine Corps’ Amphibious Combat Vehicle (ACV) program and the end game is achieving a finished heavy amphibious infantry fighting vehicle that meets the needs of the Marines.

Since 1971 the Marines use the AAV-7A1 series amphibious assault vehicle to move from ship to shore.  There are concerns over the years it has become increasingly hard to maintain and operate -- not to mention its two-mile ship to shore range is less than ideal for amphibious forces.

The next-gen vehicle must be able to self-deploy and deliver 17 Marines from a launch distance of at least 12 miles.

On land, the new vehicle will operate in all types of terrain with a cross-country range and speed the same or better than an M-1A1 Tank.

The new ACV should have at least one stabilized machine gun to engage enemy infantry and light vehicles and sufficient protection against direct and indirect fire, mines and improvised explosive devices.

And the Winner is…

For more information or to register for DARPA’s FANG Challenges, go to vehicleforge.org.

In this first FANG challenge, teams competed to design the Mobility and Drivetrain Subsystem Design for a one million dollar cash prize and the chance to have their design built in the iFAB Foundry.

Competitors use DARPA’s META design tools and its online collaboration platform Vanderbilt University’s VehicleFORGE to manage and submit their designs.

The competition will cover the whole manufacturing process cycle from requirements representation through to final physical build of a full-scale prototype.

“Ground Systems,” a three person team from Ohio, Texas and California, received the highest score for system performance and manufacturability.

Although they were based in entirely different states, they were still able to successfully collaborate and win by using the tools the DARPA provided.

One top team met through their Vehicle FORGE and another was a mere one person team. DARPA noted that in the traditional design process these sorts of teams would not have had the chance to provide their ideas -- ones that were the top designs.

In addition to designing a better vehicle for the Marines, DARPA has some other ambitions.

DARPA hopes to demonstrate that by harnessing the talents of American innovators  and equipping them with META and Vehicle FORGE -- they will accelerate the time it takes to build a critical vehicle for defense by at least a factor of five -- if not ten times faster.

This FANG initiative was launched in 2010 as part of the advanced manufacturing program that seeks to develop complex military systems at least five times faster than the current standard.

While hopefully achieving a superior amphibious assault vehicle, through the FANG competition DARPA will also be testing the specially developed META design tools, model libraries and the VehicleFORGE platform.

Innovators jump in the ring

The next FANG Challenge invites competitors to design a chassis and structural subsystems for survivability for a one million dollar prize.

In 2014, the final FANG Challenge means it is full vehicle design time -- and a chance to win two million dollars.

In addition to receiving a cash prize, the winning team in the third and final challenge could have its vehicle tested by the Marine Corps alongside ACV prototypes in operational testing.