A man tries out a Harley-Davidson LiveWire electric motorcycle at the Panasonic exhibit during CES 2019 in Las Vegas, Nevada on Jan. 8, 2019. (DAVID MCNEW/AFP/Getty Images)

The future looks bright for technology. Last week, the Consumer Electronics Show took place in Las Vegas and we went hands-on with some of the best tech. What’s it like to drive an electric motorcycle or sit in the back of a car that can immerse you in virtual reality? Find out below.

Using something called Ohmic Array Technology (which passes heat through water), the Tetra Countertop Dishwasher washes your dishes in only about ten minutes. The idea is to do smaller loads in a shorter time period. Dishes looked spotless.

Available in August, this performance cycle benefits from an electric motor in that it reaches optimal torque instantly. It springs 0-60 in just 3.5 seconds. On the show floor, the rear tire sat on rollers and reps let me squeeze the throttle to see how quickly the LiveWire accelerates.

Kodak Smile devices (which includes both an instant camera and a printer line) have an amazing new feature. The photo prints include a pattern, not viewable with the human eye, that triggers an augmented reality scene (in my case, a 3D dinosaur chasing someone). 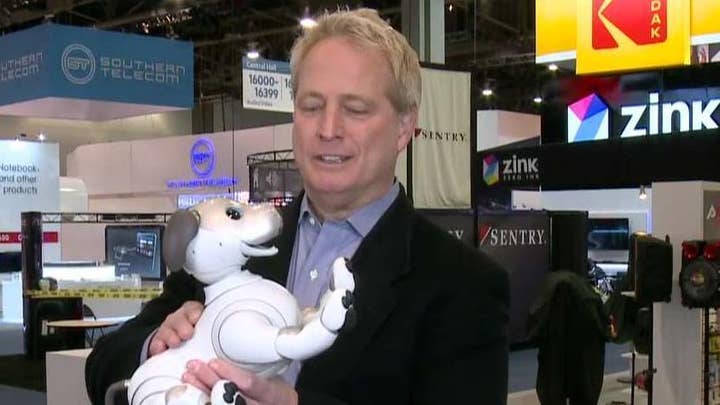 You really have to hear the Sony 360 Reality Audio to believe it. Music seemed to come from every corner of the enclosed space (both with headphones and using a single portable speaker as part of the demo). It works by placing audio sources at any point in the room.

AT CES, HYUNDAI UNVEILS CAR WITH LEGS THAT CAN WALK AND CLIMB

I climbed on this electric bike, which supports Amazon Alexa, at the show. The idea is brilliant because you can focus on cycling and keep your hands on the handlebars. Alexa lets you find bike shops nearby, control your music playback, and get directions.

My favorite test of the entire show, the Audi XR demo took place at a race track. You sit in the backseat wearing an Oculus Rift headset, playing a VR game called “Marvel's Avengers: Rocket's Rescue Run.” As the car moves and accelerates, so does the VR experience.