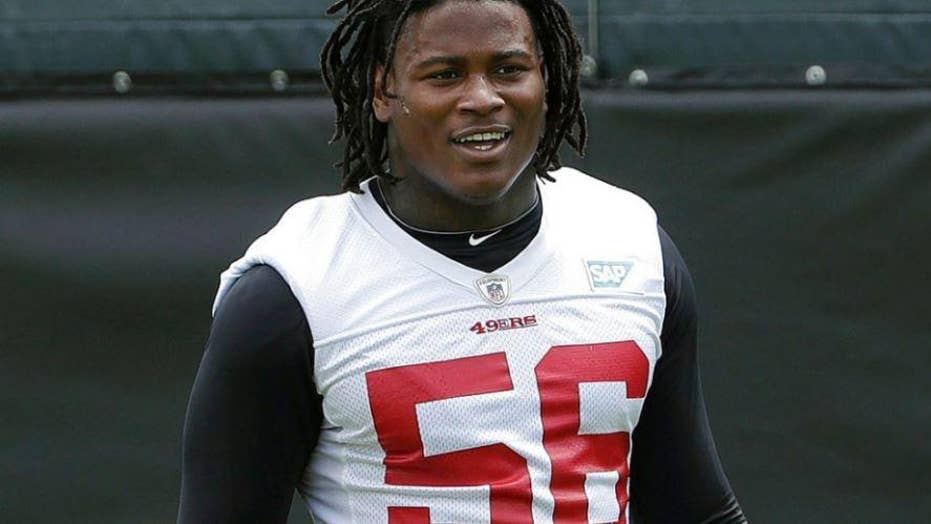 The Florida State Attorney’s Office dismissed the charge against Foster which stemmed from an incident with his ex-girlfriend at a hotel, TMZ reported Thursday, citing a court document. It’s unclear why the charge was dropped. The NFL Network's Ian Rapoport posted a photo of the State Attorney's decision to drop the charge on Twitter.

Foster, 24, was arrested in November hours before his former team, the San Francisco 49ers, were set to play the Tampa Bay Buccaneers. He was charged with one count of first-degree misdemeanor domestic violence.

Elissa Ennis, 28, who accused Foster of domestic violence, told ABC’s “Good Morning America” last month that a confrontation between them turned physical when she threatened to tell Foster’s new girlfriend that he paid for her flight to Florida.

Foster allegedly slapped Ennis’ phone out of her hand, pushed her and slapped her in the face, ABC News reported, citing an arrest affidavit.

The 49ers released Foster soon after the incident but the Redskins signed him. Ennis called Washington’s decision to sign Foster a “slap in the face.”

Ennis had previously accused Foster of domestic violence in February. She accused him of hitting her a number of times and dragging her out of their Los Gatos, Calif., home, authorities said. Ennis told a judge that she concocted the entire story and Foster’s domestic violence charges were dropped.

Foster was placed on the Commissioner’s Exempt list and still faces a suspension by the league.