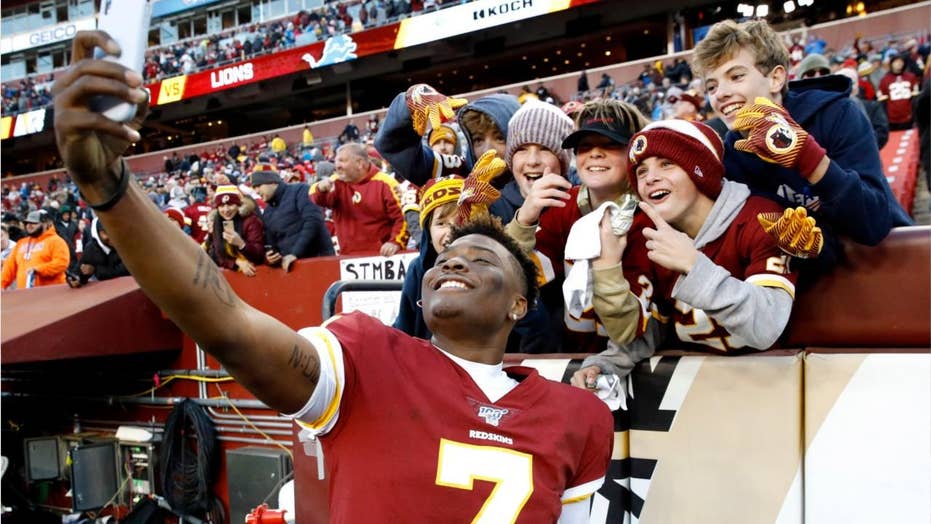 Washington Redskins' quarterback, Dwayne Haskins, missed the last play of his first win in the NFL because he was taking selfies with fans.

But, he messed it up when the Washington Redskins rookie missed the final snap in victory formation to take a selfie with a fan in the front row.

“I was so hype I think I broke a water bottle,” Haskins, the former Ohio State star, said, as ESPN reported. “I look up and we were in victory (formation) and said, ‘Oh, I thought the game was over with already.’ But I’ll get it next time.”

Washington Redskins quarterback Dwayne Haskins taking a selfie with fans during the second half of the game against the Detroit Lions on Sunday. (AP Photo/Patrick Semansky)

Dustin Hopkins connected on a 39-yard field goal with 16 seconds left, and the Redskins snapped a four-game skid and won their first game at home in 13 months.

Haskins scrambled for 11 yards and completed passes of 5 yards to Kelvin Harmon and 17 to Terry McLaurin to set up Hopkins’ go-ahead field goal.

Haskins running off the field at the end of Sunday's game. (AP Photo/Alex Brandon)

With Haskins away from the field, backup Case Keenum took a knee to run out the clock in Washington’s second win of the season.

It was a 19-16 comeback win over the Detroit Lions.

His actions angered at least one football great, as The New York Post reported.

“How do miss the last snap of a game because ur taking selfies,” tweeted Redskins legend Joe Theismann, who before the season gave Haskins his blessing to wear his former No. 7 for the first time since he retired in 1985. “That’s unprofessional & wrong.”

A fan seen in the selfie took the side of Haskins, retweeting Theismann’s tweet with the photo and the message: “OK. BOOMER.”