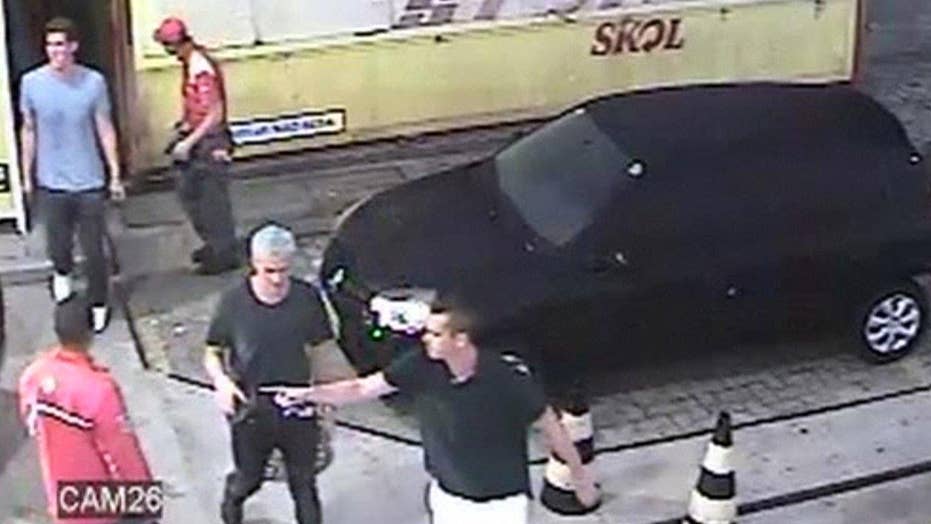 One of four U.S. Olympic swimmers who were part of a now-infamous incident at a Rio de Janeiro gas station said Friday that he never lied about being robbed.

In a statement, Gunnar Bentz said that he and teammates Ryan Lochte, James Feigen, and Jack Conger had guns drawn on them by two security guards after the swimmers "foolishly relieved ourselves" behind the gas station after a night partying with fellow athletes.

"The first security guard held a badge to me and drew his handgun," Bentz said, adding that he yelled at two teammates who were walking away to come back. "Then the second guard drew his weapon and both guards pointed their guns at us and yelled at us to sit on a nearby sidewalk."

Bentz also supported Lochte's claim that the guards demanded money from the swimmers. Ultimately, Bentz said he and Feigen paid the equivalent of about $50. At that point, he said, the guards lowered their guns and the Americans were allowed to leave.

However, Bentz's statement was also critical of Lochte's behavior. The 20-year-old said that Lochte, a 12-time Olympic medalist, pulled down a metal advertisement from the wall of the gas station, then got in a confrontation with the security guards after being ordered to sit down.

"I cannot speak to his actions," Bentz said of Lochte in the statement released by the University of Georgia, where Bentz is a junior. Bentz added that he was "unsure" why Lochte pulled the sign to the ground.

A witness, who Bentz said acted as an interpreter for the swimmers, denied a gun was pointed at the Americans during the incident and claimed the athletes decided to pay for property they destroyed to avoid calling police.

"There was no aggression. Pointing a gun at them? Never. There was nothing like that," Fernando Deluz said Friday during an interview with The Associated Press.

Lochte initially claimed that he and his teammates were robbed at gunpoint by theives posing as police officers. Rio civil police disagreed, claiming that the athletes had vandalized the gas station bathroom while intoxicated. Lochte and Feigen were indicted for falsely reporting a crime.

In his statement, Bentz said he did not see any of his teammates vandalize the bathroom.

Lochte returned to the U.S. early this week, days before a Brazilian judge ordered all four swimmers' passports seized. On Friday, Lochte issued a statement saying he should have been "more careful and candid" in discussing the incident, but maintained a gun was pointed at him by a stranger and that the swimmers were forced to pay money to leave the gas station.

Bentz and Conger, who were not indicted, flew out of Rio Thursday. The day before, Brazilian authorities had pulled them off a U.S.-bound flight to be interviewed about the incident.

Feigen left Brazil Friday night, after agreeing to pay $10,800 to a local charity.

"Without question, I am taking away a valuable life lesson from this situation," Bentz's statement concluded. "In everything I do, I am representing my family, my country and my school. I will not take that responsibility lightly."