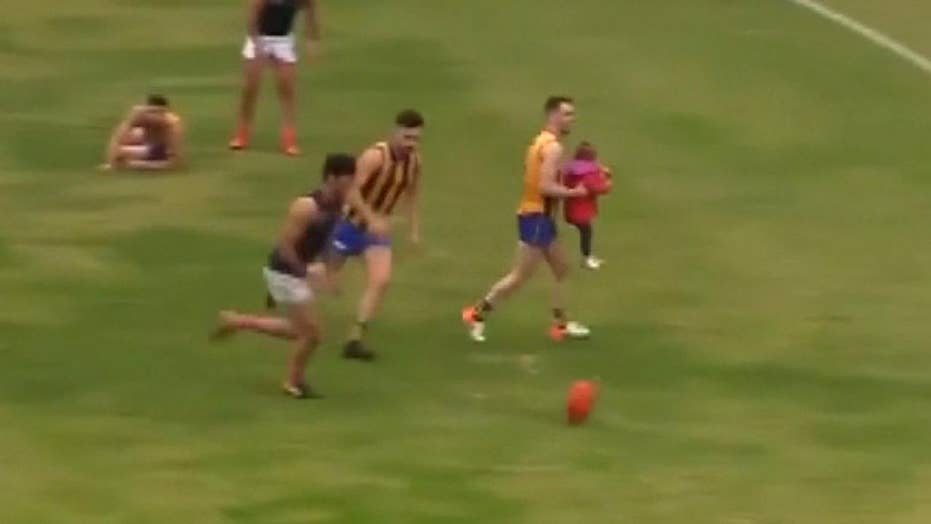 A toddler who appeared to want to be involved in an Aussie rules football game was nearly flattened after wandering on to the field during a recent match in Melbourne.

Two-year-old Pippa Biggs appeared to have wandered away from her father and headed right into the middle of the action of the Victorian Amateur Football Association Premier Division match on Saturday, the Herald Sun reported.

Video from the potentially dangerous incident shows the one quick-thinking player from St. Bernard’s College ignoring the ball coming his way and instead scooping up the toddler and carrying her to safety.

Alex McLeod, the player who picked Biggs up, has been praised for his heroic actions. He told foxfooty.com.au that it was one of the strangest things he’s seen on the field.

“There are always plenty of kids down at St. Bernard’s on a Saturday but I’ve never seen one so close to the boundary line – let alone having a run around with the seniors,” he said. “Initially [I] thought someone on the boundary would pick her up and get her out of harm’s way, the ball actually bounced toward her so there were a fair few players in the area.”

He added: “[I] was relieved that I didn’t drop her as I’d been fumbling the football all game!”

The child’s dad David told the Herald Sun that his daughter’s streak onto the field was “cheeky.”

“I was standing next to her at the time and then all of a sudden she was gone,” he said. “She is very active, she’s a bit of a cheeky one. Before I knew it there was a little girl in a red jacket running around and I thought it was the footy.”

The football association, who shared a video of the incident, said the child was safe and sound.

“A scary moment at the Snake Pit yesterday when a toddler ran onto the ground before fast-thinking St. Bernard’s star Alex McLeod came to the rescue,” the association said on Facebook. “We can report the little girl left the game safe & sound as she looks forward to donning the Snow Dogs women’s jumper in about 15 years…”