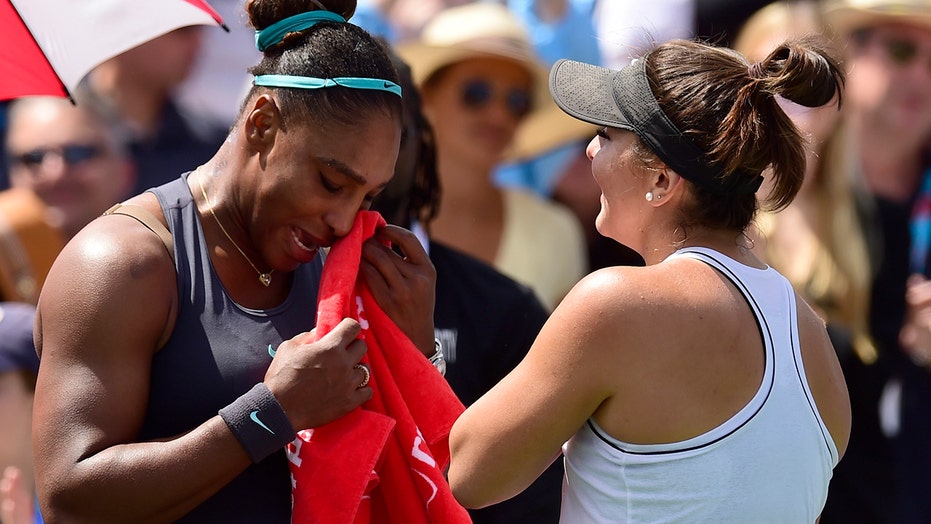 Serena Williams was brought to tears on Sunday after a back injury forced her to retire in the first set of the Rogers Cup final.

Williams, who came in second place in the Wimbledon final last month, complained of back spasms and pulled out of the tournament in Toronto.

US FENCER TAKES A KNEE DURING ANTHEM

After learning that she had won the championship due to Williams’ pullout, Canadian player Bianca Andreescu, 19, walked over to the tennis champion to comfort her.

SERENA WILLIAMS RECALLS US OPEN MELTDOWN IN ESSAY, THOUGHT SHE WAS 'DOING THE RIGHT THING'

The two athletes hugged as the crowd cheered on the moment of sportsmanship. Williams, 37, has been on a mission to win a title since giving birth to daughter Olympia in 2017, but so far has come up short.

"I’m sorry I couldn’t do it today," Williams said after the match. "I tried, but I couldn’t. Bianca, you’re a great sportswoman. It’s been a tough year but I’m going to keep going."

Andreescu became the first Canadian to win the Rogers Cup since 1969 thanks to her defeat of Williams.