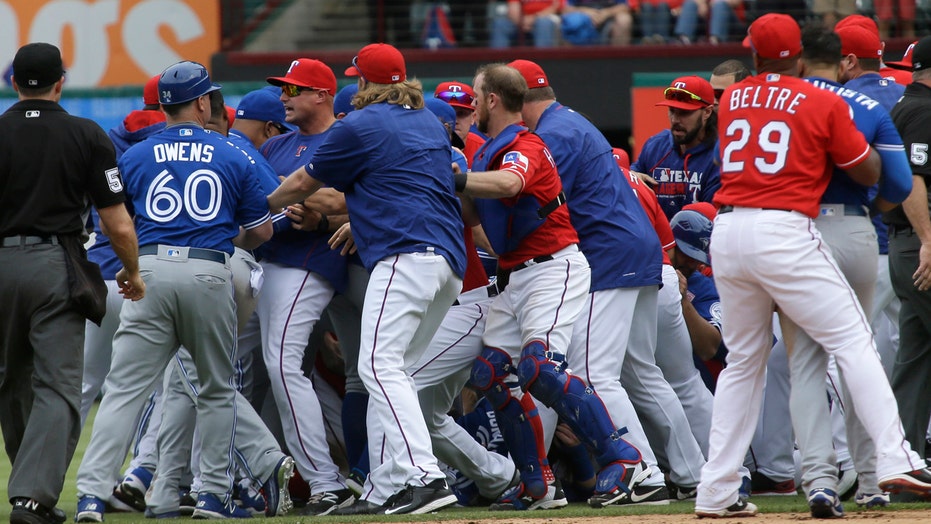 Will Odor punishment fit the crime?

Odor, 22, plans to appeal, Heyman said. No suspension will take place until Odor’s appeal is heard or he drops it. It was not clear if anyone else on the Rangers or Toronto Blue Jays would be penalized for their roles in the bench-clearing melee.

It will likely only be Major League Baseball that doles out justice to Odor for his fight with Blue Jays slugger Jose Bautista, 35. Law enforcement is likely to stay out of the case, police said.

“It happens all the time in baseball,” Arlington Police Spokesperson Sgt. VaNessa Harrison told The Star-Telegram. “We don’t get involved unless they notify us. It’s sports, which is a totally different ballgame.”

No one from either team or from the MLB executive offices has reached out to authorities about moving the case to a courtroom setting, The Star-Telegram reported.

Sunday was the final meeting this season between the Rangers and Blue Jays – unless both teams make the playoffs.

The two met in an emotional 2015 American League Division Series, which the Blue Jays won, 3-2. The final win-or-go-home Game 5 featured a defiant, celebratory bat flip from Bautista after he clubbed a go-ahead home run. Some observers think that’s when the bad blood that boiled over Sunday began simmering.

Sunday’s incident began when Rangers reliever Matt Bush, making just his second MLB appearance, hit Bautista with a pitch to start the eighth inning. Bautista appeared to believe the plunking was intentional and, two batters later, he slid hard into Odor at second base.

When Bautista popped up from the slide, Odor shoved him. As Bautista approached Odor again, Odor cocked his right arm and socked Bautista on the left side of his face. As veteran Rangers third baseman Adrian Beltre quickly wrapped Bautista up in his arms and dragged him away from Odor, both benches instantly emptied and a wild shoving match broke out on the field. A few more punches appeared to be thrown as well.

Odor, Bautista and two others were ejected after the brawl.

“It’s part of the game,” Odor said later, adding of Bautista: “I respect him. He plays hard.”