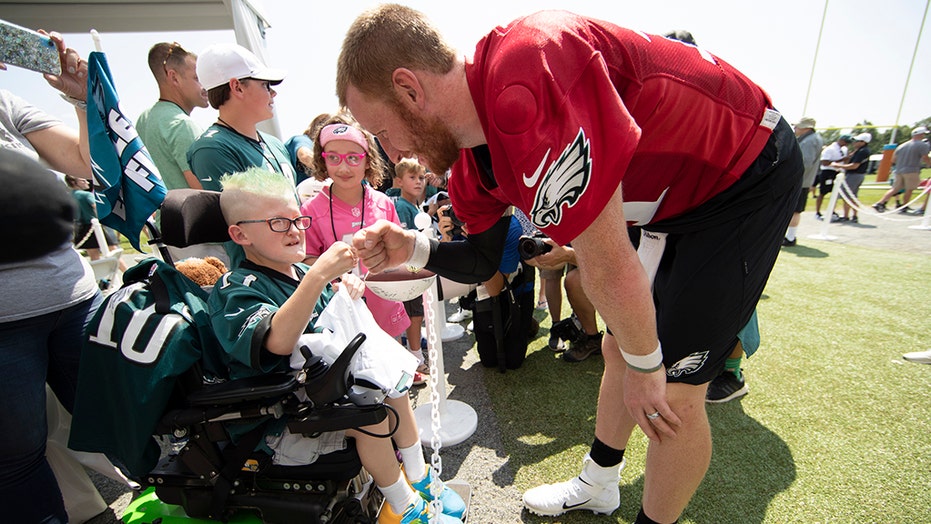 Philadelphia Eagles quarterback Carson Wentz took time away from training camp Friday to meet one of his biggest fans in a touching moment that was captured on video.

Wentz stepped off the field to meet 11-year-old Giovanni Hamilton who instantly became emotional as his “hero” signed his No.11 jersey.

“You’re my hero,” the young boy said tearfully after reaching out for a hug.

Giovanni was diagnosed with a rare condition called Schwartz-Jampel Syndrome (SJS) and has had over 12 surgeries since the age of 2 including hip construction and recently jaw distraction,  ESPN reported.

"We actually lengthened [his jaw] an inch, and we had to turn pins every day in order to do that in moving him one millimeter a day," his mom Shannon told the website. "It was really painful and just awful. But he told me, he said, 'Mom, I'm going to be strong like Carson. Look at how he's doing with his knee. Look at how he's doing with his back.'”

According to the National Organization for Rare Disorders, SJS is a genetic condition characterized by abnormalities of the skeletal muscles and growth delays which can result in bone dysplasia, joint contractures, and dwarfism.

“It just meant everything for him to finally meet Carson. He just choked up. He couldn't get the words out. So, of course, I lost it,” Giovanni’s mom continued.